VSPEX takes cloud computing to the next level by providing the market with pre-validated solutions while still being allowing selection of best-of-breed vendors.

You can build virtualized data centers in the cloud using best-in-class components for computing and communicating. Alternatively you can buy converged infrastructure packages. But now there's at third way: Assemble a solution using convergence components that have been certified and validated and that deliver predictable performance.

The first option--build your own from best in class--takes time and significant integration resources, but the resulting solution can be used as a competitive differentiator. Buying a packaged solution bypasses the resource issue and it's an attractive option, particularly when the components come from leading vendors. VCE's range of Vblock Systems fits this bill. Vblock integrates compute, network, and storage technologies from Cisco, VMware, and EMC--components that are pre-integrated, tested, and validated, which enables quick deployment. The only downside is the fact that Vblocks are closed systems: you can't change or add functionality, which may or may not be an issue for you.

The third way sits in the middle. EMC VSPEX infrastructure employs best-of-breed components that have been certified and pre-validated and that deliver predictable performance.

So what's the difference? VSPEX is an open, flexible concept and you make the selection. You choose the network, server, and hypervisor that your environment requires to go along with EMC's storage systems. And because VSPEX components are tested and validated by EMC, systems can be deployed quickly using minimal IT resources and with full confidence in the interoperability and performance of the stack. That's the pitch, anyway.

There has to be a component choice at every layer of the solution, and that is a key issue: no lock-ins to a single vendor. As illustrated below, at the application level there's VMware and Citrix. VMware and Microsoft come in at the hypervisor level; Cisco, Dell, HP and IBM at the server level; Extreme, Cisco and Brocade handle switching; and EMC does storage.

All this sounds like a good choice. It indicates that EMC is creating a robust ecosystem that delivers the converged infrastructure promise: a pool of resources that delivers an accelerated path to the cloud, as well as solutions that scale to known capacities and that can be deployed with minimal IT resources. 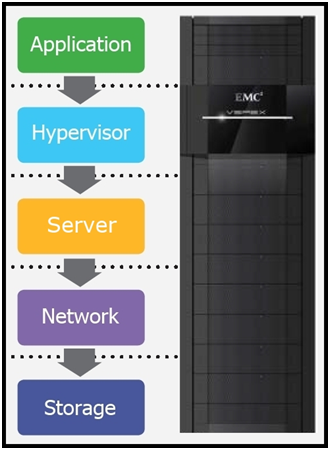 This topology combines the functionality of the cloud, the enterprise network and the data center. Fewer hops are therefore required for East-West communications traffic, the majority of which is North-South: end users to cloud-based applications and services.

This type of virtualized data center looks set to become the model of the future--a model that will enable rapid connection to private, hybrid or public cloud resources with minimal re-engineering of existing solutions. VSPEX facilitates the delivery of that model: it enables faster virtual infrastructure deployment, greater flexibility of choice, efficiency, and lower risk.

The concept stands or fails on the certification and validation process, which is handled by EMC's VSPEX Labs, the company's collaborative environment. It makes physical VSPEX stacks accessible for software and hardware vendors in order to rigorously test and validate the performance of their technology, and then document how it should be deployed as part of a VSPEX solution. When the testing has been completed, the technology is officially validated.

This is an ongoing process (see EMC Pulse for more information). For example, EMC is currently working with other companies to test their new configurations, e.g., providers of management and orchestration technology. The objective is to deliver a set of options for VSPEX that will allow customers to choose the management platform that works best for them. In addition, Cisco is providing validation designs for VSPEX solutions built on Cisco UCS (Unified Computing System) infrastructure architecture.

Extreme Networks brings its SDN-compliant Summit and BlackDiamond Ethernet switches to the table, branded as its "Open Fabric" network architecture. (See Figure 1 in "SDN Spreads Its Wings: And Starts To Fly"). Open Fabric switches, which support OpenFlow and OpenStack, are now validated for deployment in VSPEX-compliant infrastructures.

This is an interesting combination. SDN is changing the closed, proprietary world of networking--a world that hasn't changed much for decades, with its vertically integrated hardware, slow innovation and artificially high margins. VSPEX aligns with the increased emphasis on end-to-end automation and the delivery of IT as a service. And both developments align with the way the world is moving to open environments along with an almost unlimited need for scale, efficiency, SLA support, big data and mobility.

One could look at both markets--converged infrastructure and SDN--and think they are addressing different challenges, but one could also see the two as complementary technologies. The converged infrastructure is the foundation that is replicable, scalable, and flexible, while SDN is the innovative differentiation needed for this century's applications and technologies.

This is the way Extreme sees it: the company says that they developed their SDN and OpenStack technology with a data center stack architecture in mind. They have also developed a "topology aware" algorithm that automates the location and placement of VMs in the storage, compute and network stack of VSPEX solutions. And as part of an alliance agreement with Lenovo, Extreme has also tested their ThinkServer solutions.

Conclusions
The benefits of virtualization and the cloud are tangible. SDN takes us to the next level. No longer is the networking infrastructure viewed as merely providing fast connectivity between users, servers and storage. In turn, These are winning concepts that come from different directions, but both enable IT to make better use of corporate resources: to do more while operating in an era of tight budgets and a problematic economy.