The longer a company goes without experiencing an attack, the more complacent it becomes and less likely to adhere to proper security procedures.

Cyber crime is all around us, and the cost to the enterprise for cyber attacks keeps rising. The time to resolve and fix the attacks is not decreasing much. These are the conclusions of the HP-sponsored "2014 Cost of Cyber Crime Study: United States" produced by the Ponemon Institute. All the graphics in this blog are from the Ponemon report.

No Enterprise Is Safe
Although many of the publicly known attacks have been on financial institutions, no industry is immune. It turns out that attacks against energy and utilities companies have encountered the highest costs, with defense the second highest costs. Specifically, the average cost of cyber crime per company has increased 95% in 4 years, growing from $6.5 million in 2010 to $12.7 million in 2014. The chart below shows that FY 2014 attacks have cost more than the annualized costs for the last five ears.

Clearly, costs keep rising, and I expect this to continue. This will be the case as attackers become ever more sophisticated in developing the attacks. Many attacks have been so well designed and implemented that they are not even discovered for months (as we have witnessed in the retail industry). 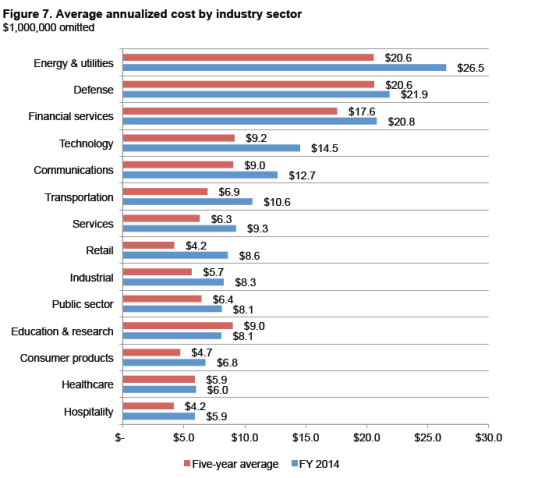 What Are the Crimes?
There is no shortage of attack modes. The most common are viruses, worms, and Trojans; malware is a close second. (See the chart below.) The specific cyber crimes that Ponemon focused on are:

The problem for the enterprise is that it MUST consider all the attack modes as possibilities for cyber crime. The enterprise should not focus on only the most likely attack modes, but instead should develop countermeasures for all forms of cyber crime. Even though stolen devices are low on the list, the contents of such a stolen device can be devastating if compromised. The major task of security personnel is to not limit their imaginations when developing attack prevention and mitigation methodologies. 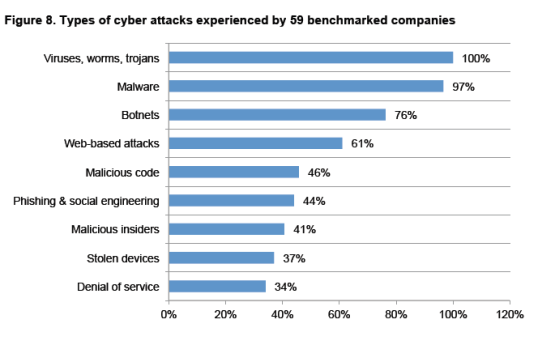 Time to Resolve
One of the most worrisome conclusions of the Ponemon report is that the time to resolve attacks is so long. At the top of the list of threats is the "insider," the person or persons who create attacks against their own organization. This kind of attack means that the security clearances that are conducted by the enterprise have to be improved. It also means that unhappy personnel have to be identified early because they may attack the enterprise as reprisal for some perceived injustice. The enterprise cannot assume that once the employee or contractor has been approved for a certain security level that the employee/contactor will remain as a low security risk.

Since so many organizations are now using cloud services, your lawyers should thoroughly analyze cloud agreements to ensure that your organization is protected. When there is a security issue, knowing what the cloud provider will do, in what way they will respond, and how fast they will take action are major concerns. 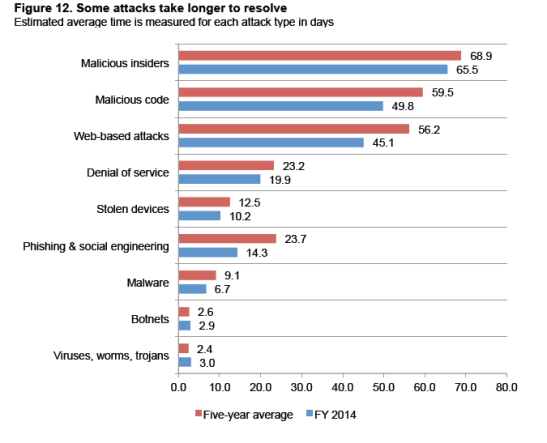 The graphic above shows that in most cases, the resolution time for 2014 attacks is slightly shorter than the average for the last five years. Most of the other attacks have to do with lax employee procedures and poor security training.

When I was in Air Force Intelligence, we would conduct security investigations every quarter, even if no security violations occurred. I would perform my investigation on departments outside my organization so that there would be as unbiased an assessment as possible. The periodic investigations also meant that everyone was regularly reminded of our security obligations.

Budget for the Worst, Hope for the Best
Budgeting for security is akin to self-insurance. You don't want to spend money needlessly, but on the other hand, an attack can be devastating for the enterprise. The security staff and consultants should not be the subject of budget cutting. Just because you have resisted attacks in the past is no assurance that the enterprise will resist attacks in the future.

Look at the costs incurred by your industry. It will be far cheaper to budget 20% of the potential losses than it is the pay for the attacks after the fact. A tight budget may satisfy the CXOs but when an attack occurs, you may lose your job even though you were not provided with enough resources to have prevented an attack.

Register for Enterprise Connect Orlando 2015 and attend Gary Audin's session, "Right-Sizing Your SIP Trunk Procurement" on Wednesday, March 18. Use code NJSPEAKER to save $300 on an Entire Event pass.