What WON’T Happen in Customer Engagement in 2020

Musings on the evolving role of chatbots 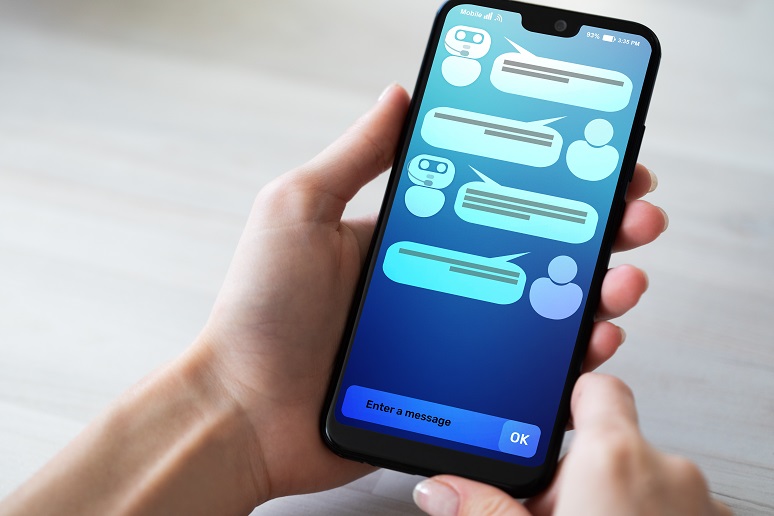 Image: WrightStudio - stock.adobe.com
Before I begin, let me (shamelessly) point to the inspiration for my headline: a press release from ABI Research titled, “What WON’T happen in 2020: 5G Wearables, Quantum Computing, and Self-Driving Trucks to Name a few.”
There is the occasional tendency to over-estimate the speed with which innovations will be adopted. I’m sure you have seen predictions that contact center agents will soon be the thing of the past. It is the supposition of articles such as this one from tech media site BGR: “Google really, really wants to replace call center workers with AI.” The thinking was that once artificial intelligence (AI) was readily available, there would be no need for human agents to answer calls from customers, respond to chats or engage on social media. Recalling a 2016 meeting, I remember being appalled to hear a large company with hundreds of agents talking publicly about its goal to have zero human agents by 2020.
Luckily, the tide never really turned in that direction. Early failures, including a Microsoft chatbot called Tay, sent companies back to the drawing board in terms of their expectations for chatbots and AI in general.
The Influence of Escalation
Earlier this month, during a webinar with Five9 CEO Rowan Trollope, I had the opportunity to take the pulse of contact center stakeholders on this issue. As seen in the graphic below, we asked webinar participants to report on the willingness of consumers to interact with chatbots. (While 175 participants responded to the question, hundreds more registered for the webinar and will presumably listen on demand.) The results are wildly positive; 82% of respondents believe that consumers are willing to interact with chatbots if they can escalate to a live agent. 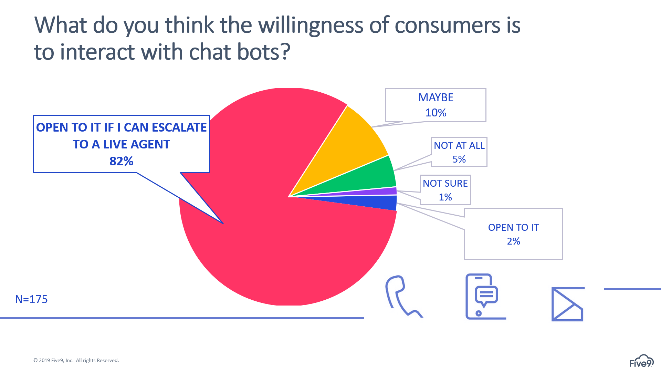 As someone who both studied statistics and worked as an AT&T market researcher for several years before becoming an industry analyst, I know that the responses to survey questions are dependent on the wording of the questions. It is easy for me to not just imagine but to calculate how different the data would be if the choices had been limited to the other four: open to it, maybe, not sure, or not at all.
Removing the “escalate” option and recalculating the responses — making the big assumption that everyone who chose it would distribute their responses similar to those who did make other choices — presents a very different picture. Instead of a modern view of today’s consumers — willing to try new technology as long as they have backup to talk to a human if they get stuck — only 13% of respondents would have reported that consumers are open to chatbots. Over 50% would have answered maybe, and a full 27% would have said consumers would not at all be willing to use chatbots.
Page from the History Books
The lesson of our story: You can draw a correlation between the deployment of chatbots today and the IVR in the 1990s. There are ways to implement the technology that serve consumers well, that give them faster answers to easy questions. It is also easy to fall into a trap of creating a new kind of IVR jail, where consumers are unable to get the human help they need when they need it.
What won’t happen in 2020? Companies are not going to abandon human agents in favor of chatbots. But they are going to continue to deploy them for simple interactions and work to make it easy for consumers to reach out to a human agent when required.