The vision for leveraging UCaaS, CCaaS, and CPaaS for customized workflows is coming together. 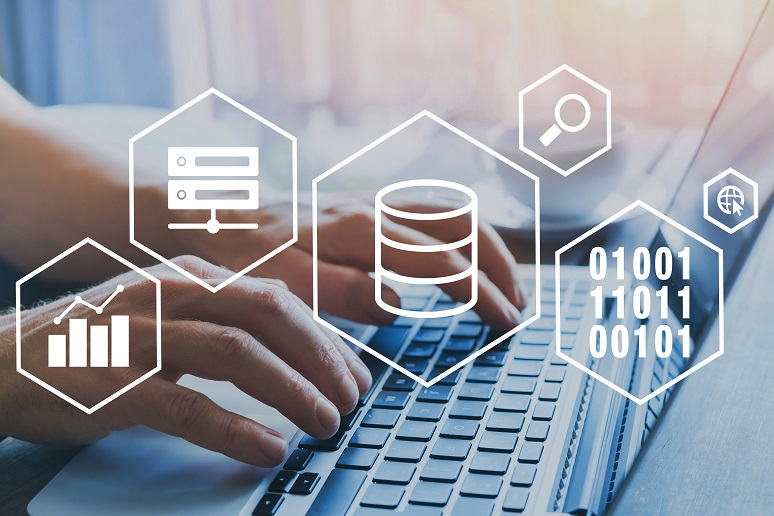 Image: Song_about_summer - stock.adobe.com
As covered last week on No Jitter, Avaya has announced a number of updates to its Spaces team — or workstream, in its parlance — collaboration platform, which it has quietly built into a best-in-class tool for meetings. I find it easy to use, well designed, and able to deliver high-quality and audio and video. But in many ways, Spaces isn’t as much a product as it is an example of how to build an application on a communications platform-as-a-service (CPaaS) back end — in this case, the Avaya OneCloud CPaaS, which provides APIs and other resources for communications-enabling applications and workflows.
Among the enhancements noted in last week’s news post, I think a couple in particular are worth calling out. These are enhanced calling, which enables Spaces users to call anyone inside or outside the company with voice or video, and a wide range of AI features delivered via Avaya’s partnership with GPU vendor Nvidia. For the latter, Avaya leverages Nvidia’s cloud-based Maxine service so the capabilities can run on any device. Other UCaaS vendors build features either into the software or the endpoint, which limits where they can be used.
The real news, however, is the alignment of Spaces with the composable enterprise. The term “composable enterprise,” which is likely new to many people in communications, describes a business that’s highly agile and has embraced the API economy. A composable enterprise delivers business outcomes through a combination of packaged and custom applications, with the latter assembled using low-code/no-code API platforms, like Avaya OneCloud CPaaS.
A wide range of application vendors have made the shift to low-code/no-code platforms. The list includes household names like Salesforce, Pega, Zoho, and ServiceNow, as well as a wide range of small companies. These platforms enable line-of-business people — that is, not technical individuals — to create custom versions of apps to meet the demands of a specific workflow. For example, a field service professional likely doesn’t need access to all of Salesforce. Instead, they need the ability to look up cases and enter data to close tickets. In this case, it makes sense to customize Salesforce for this purpose or to build Salesforce capabilities into another application.
While we’ve seen tremendous innovation in low-code/no-code, that hasn’t made its way to communications. This might seem surprising given how critical communications is to digital transformation, but communications has always lagged other areas of IT. It was late to the world of IP, late to cloud, and now late to composable. In fairness to the communications buyers and vendors, voice and now video apps are critical to customer and employee experience, and that means many businesses are overly cautious and have a “if it ain’t broke, don’t fix it mentality.”
But times are changing, and the reality is while packaged apps, like meeting tools, are great for some use cases, they’re not great for all of them. Meeting the needs of custom workflows and specific industries requires communications evolving from being a product to an API platform that enables businesses to build communications capabilities into apps or custom communications-centric tools quickly.
During an analyst briefing, Avaya gave an example of a vaccine rollout app built on OneCloud CPaaS. Another example that I’m familiar with comes out of Egypt, where the Ministry of Communications and Information Technology built a virtual chatbot to address the needs of hearing-impaired people. In both cases, the organizations could have used Spaces, or an application like it, for video-based B2C interactions. Doing so, however, would have created a cumbersome workflow as whoever would be interfacing with the customer would need to flip between multiple apps constantly. Customers can use Spaces for general-purpose meetings and then leverage the CPaaS cloud for bespoke use cases.
It's important to note that OneCloud CPaaS brings the same kind of programmability to Avaya’s CCaaS offering for contact center use cases. One demo I saw recently showed a workflow that integrated Facebook’s mobile service with Avaya’s Spaces and CCaaS platforms. Here’s how that works:
In this last step, the customer could have continued to use Facebook mobile, but what’s compelling is the ability to move the interaction to any media (Facebook, other social, chat, voice, video, SMS, etc.) because the workflow is built on the workstream collaboration engine. This gives customers the choice to use the media of their choice but then switch without losing context. The orchestration engine, a low-code/no-code AI flow engine, is very intuitive. The power is in how quickly, and intuitively, the engine can create personalized business processes that include all forms of media and any third-party applications. Contact center has always integrated those elements, but the key here is how easy, intuitive, and quickly this can be done now.
CPaaS vendors recognized the value of being able to leverage UCaaS, CCaaS, and CPaaS in building custom apps a while ago, but by offering both the API platform and the pre-built application, Avaya can deliver a similar experience regardless of whether the customer uses Spaces, chooses to build a custom app, or selects something in between. This thinking led Avaya to its “OneCloud” vision and decision to extend that branding across its contact center, UC and team collaboration, and API offerings. OneCloud doesn’t refer to a single cloud but rather multiple delivery models for a single experience.
The slide below really nails the point. The slide shows the complexity of work and all the ways it is done today. The Spaces app can address some, but certainly not all, of the use cases. The rest can have solutions composed using OneCloud CPaaS. 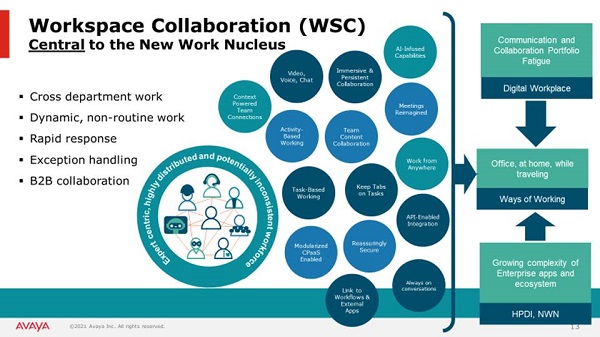 The other underappreciated aspect of OneCloud CPaaS is that it’s a modernized, open platform — and that means ease of integration with best-of-breed partners. For example, as mentioned earlier, Avaya delivers its new AI capabilities via its partnership with Nvidia. It has other capabilities that rely on Google. The ability to partner should create an advantage for Avaya as it can drop in features fast versus having to build everything in house.
Again, the Spaces enhancements are interesting, but more important is to understand that Spaces is less of a product and more an example of what’s possible with OneCloud CPaaS. More to come, I’m sure.