Will an IBM-Apple Partnership Shake the Enterprise Mobility Market?

By partnering up with IBM, Apple is marginalizing Android's top producer, Samsung, which desperately needs to improve on the software and enterprise fronts.

In a move that would have been unthinkable 30 years ago, IBM and Apple announced Tuesday that they would be forging an exclusive partnership to team the strengths of each company to transform enterprise mobility with a new class of business apps that would bring IBM's big data and analytics capabilities to iPhone and iPad.

The announcement touts "the power of more than 100,000 IBM industry and domain consultants and software developers behind it, fused with Apple's legendary consumer experience, hardware and software integration and developer platform." 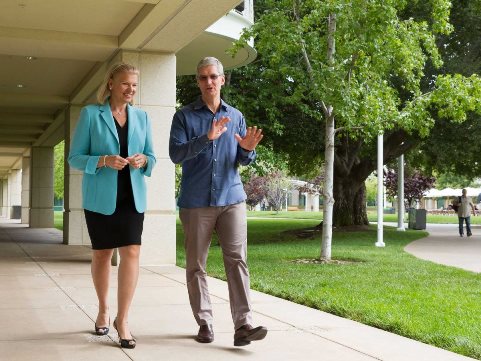 Dubbed the IBM MobileFirst for iOS agreement, the goal of the partnership is to put in the hands of business professionals the capabilities of iPads and iPhones, combined with a company's knowledge, data, analytics and workflows. The companies promise a "new class of 'made-for-business apps' targeting specific industry issues or opportunities in retail, healthcare, banking, travel and transportation, telecommunications and insurance, among others..." They are slated to become available beginning this fall and moving forward into 2015, dates that are in line with the release of Apple's next version of the iPhone-iPad operating system iOS 8.

While both companies are talking about business transformation through mobility, it's hard to avoid the thought that these are strange bedfellows indeed. While Apple has reshaped the consumer electronics market with a string of highly innovative products that stretch back to the Mac and the iPod, IBM is the bluest of the Blue Chips. So while IBM has forged strong bonds with the largest enterprises on earth over a period of decades, Apple has all but thumbed its nose at the enterprise buyer. However, there are some other elements at work here that could come into play.

Why The Move Makes Sense
First off, despite its obvious consumer focus, Apple has developed a strong lead among enterprise mobility buyers and users. While Apple may put on the "we're all about the consumer" for its public face, it was far faster at implementing on-device encryption, MDM support and other enterprise-focused features than Android was. The result was that many security-sensitive enterprises banned Android while they embraced Apple as the alternative to BlackBerry.

That dominance is reflected in Apple's share of the enterprise market. It is true that Android dominates in the overall smartphone market with Gartner putting its market share at 78.4% for the fourth quarter of 2013 (more than five-times Apple's 15.6% share). However, data from IBM's Fiberlink enterprise mobility management division shows that when it comes to enterprise devices on the Fiberlink platform, iOS is besting Android by about three-to-one (72% to 26%).

So while Android dominates the consumer market, Apple still has a commanding lead in the enterprise. Should the Apple-IBM partnership succeed, Fiberlink should profit handsomely from its incorporation into the IBM product line.

The biggest advantage for Apple in this agreement is that it will now have IBM's army of engineers, developers, marketers and systems integrators pushing its wares to IBM's massive base of large customers.

I've long admired both companies - but for entirely different reasons. Apple has clearly swept the market with wildly innovative, fun-to-use products that have completely altered consumer expectations about what tech products can be. For its part, IBM has established a unique position in serving large businesses and has continued to evolve from closed systems (anybody remember the "SNA" networking protocol?) to open systems, and from hardware to software and services. And for my money, it continues to be the company of big ideas with initiatives like Watson and Smarter Planet.

While we will have to wait and see how much this new initiative contributes to either company's bottom line, I think both organizations "bet on the right horse." More importantly, with IBM partnering up with Apple, it is marginalizing Android's top producer Samsung, which desperately needs to improve on the software and enterprise fronts.

We are not likely to read much about the results of this combination in the general media (unless we're talking about Bloomberg and The Wall Street Journal), but it could go a long way toward advancing the idea of business transformation through the intelligent use of mobile technology, and that will be a good thing all around.

"Communications in Your Apps" by Marty Parker
"How the Other Half Buys" by Eric Krapf
"Electronic Assistants Delivering Mobile Moments – AKA Can My Cell Phone REALLY Do That?" by Henry Dewing

Step Up Your CX Game

Here are some examples of verticals that get the customer experience right and some that don’t.

A recap of announcements from their flagship events.