Sees this Paris company as a digital technology play that compliments its contact center offering while giving it a footprint in France.

I woke to the news that RingCentral had made its much-anticipated move to acquire a contact center technology company, a strong technology play -- Dimelo. RingCentral didn't share financial details, as Dimelo is privately held.

In terms of quick demographics, Dimelo is headquartered in Paris, with additional locations in Singapore and Kenya, and has approximately 50 employees. Organizationally, Dimelo will continue to operate as it has, in France, and its headquarters there will become French headquarters for RingCentral.

I'd been familiar with Dimelo from a 2017 briefing with CEO Stéphane Lee, but still had lots of questions about the acquisition -- primarily about the technology fit and RingCentral's planned go-to-market approach. Thank you to the marketing people from both firms (especially Neha Mirchandani from RingCentral and Julien Rio of Dimelo) for getting me on the phone this morning with Lee and RingCentral COO David Sipes to get my questions answered.

First, I wanted to know more about Dimelo's background. The company began in 2006, focused on creating a community platform, Lee said. It shifted in 2010 to the creation of a platform for classifying and managing social interactions. That platform, which Dimelo has continued to be expand over the years, is the asset that RingCentral was most interested in, though the community capabilities continue to exist and support customers.

The graphic below, from the RingCentral investor deck about the acquisition, does a great job of explaining the capabilities in the Dimelo solution -- as well as which company it sees as a key competitor: LivePerson. 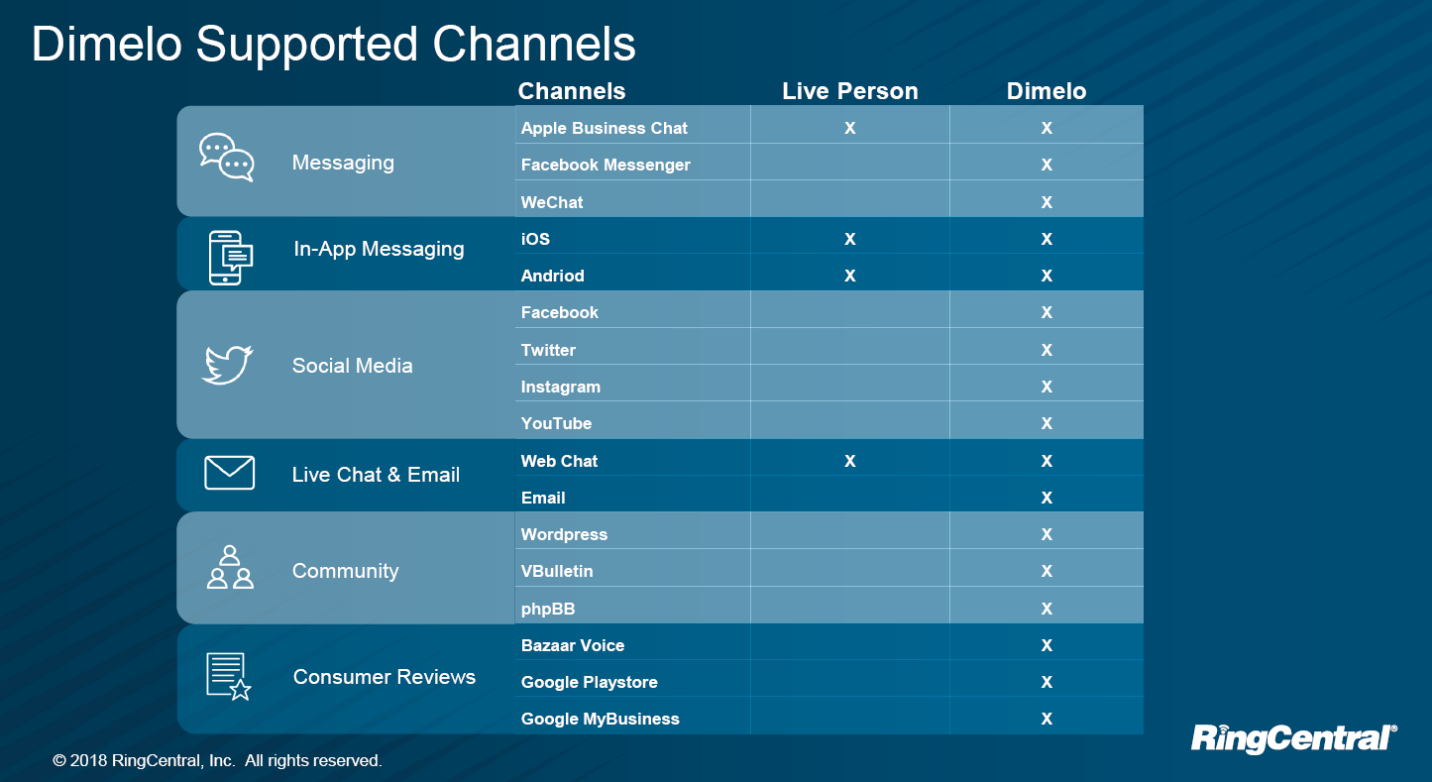 Notice that the very first channel mentioned in the list is Apple Business Chat, which was announced to much hype about a month ago. When questioned, Lee cited three Dimelo customers using Apple Business Chat: Engie, the second-largest energy provider in France; La Redoute, a near billion-dollar online retailer, also in France; and AXA Switzerland, an insurance company. I asked if these three deployments would best be described as proof of concepts, and Lee said the companies "are seeing a lot of the popularity with this channel, a lot of volume," and that they are considered production deployments.

Lee's discussion of his Apple Business Chat customers previewed the answer to another question: Where is Dimelo's largest deployment, and how many agents are using the Dimelo platform there? That would be Engie, which has 500 concurrent Dimelo licenses, or, as Lee said, is the equivalent of support for 3,000 named agents. Engie chose Dimelo 18 months ago to support its digital channels (including email, chat, and social messaging) from a competitive field that included Salesforce, Lee said.

With a better understanding of how Dimelo has been competing in the market, I turned my questions to Sipes. I asked if the international characteristics of Dimelo were important or if this was purely a technology decision. Indeed, Sipes answered, RingCentral has acquired Dimelo primarily as a technology play, similar to its previous acquisitions. In terms of how RingCentral will integrate the Dimelo technology with its platform, Sipes compared it to how it uses Glip to augment the company's UCaaS portfolio with team collaboration. Just as employees require tools that go beyond voice services for next-generation collaboration, so too do companies need customer engagement tools to better digitally serve customers.

Returning to the topic of international reach, RingCentral has been having a lot of success in the U.K. and had a recent big win in France, Sipes said. Circom, a professional association of public television stations, is RingCentral's first million-dollar-plus deal in France. Dimelo offers a bigger presence in France to support that deal as well as relationships with European carriers, especially Orange and Proximus Group.

My last question to Sipes addressed what the Dimelo acquisition would mean to RingCentral's long-standing, and very successful, contact center resale agreement with NICE inContact. Dimelo "is very complimentary. It sits alongside legacy voice solutions today in large enterprises and it can easily fit alongside a cloud solution also," said Sipes, adding that Dimelo is typically deployed into organizations that have dedicated digital agents.

As was true with Vonage's acquisition of NewVoiceMedia, RingCentral said it continues to see value in partnering with NICE inContact. This is likely due to the fact that both RingCentral and Vonage continue to have great success bringing NICE InContact's CXone solution to their customers.