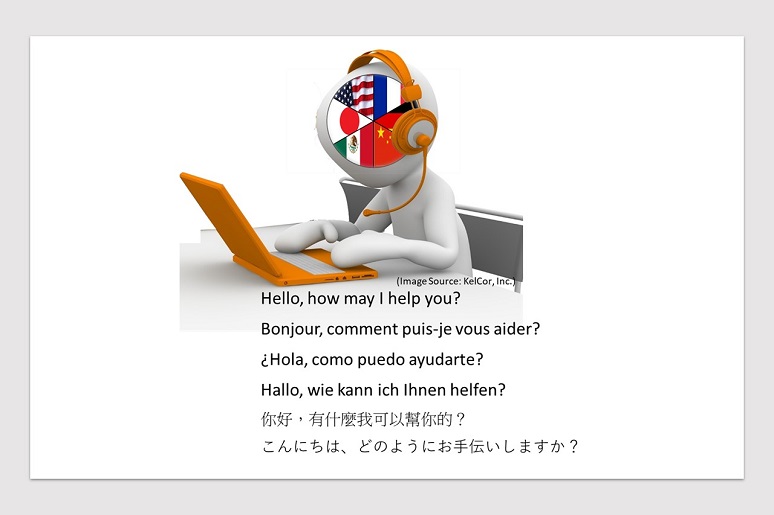 Some years ago, New York Times foreign affairs columnist Thomas Freidman wrote a book titled, “The World is Flat,” in which he analyzed how a number of factors influenced world globalization, creating a more level economic playing field among countries, businesses, and individuals. The results of globalization are all around us with products and services being delivered daily from many locations throughout the world.
One consequence is that many organizations now have customers that speak a variety of different languages. If you are trying to create an automated customer engagement strategy that serves these customers, it will ultimately become important to consider how you are going to craft multilingual intelligent virtual agents (IVAs) and polyglot agent-assist capabilities. Multilingual IVAs are presently on the cutting edge of IVA development, and not many companies do it… yet.
Google Dialogflow (and Contact Center AI) currently supports speech-to-text capabilities in 32 languages and text-to-speech capabilities in 28 languages, and Google Translate supports translation between 104 languages.

So, how do you go about creating IVAs in multiple languages?

In this article, the eleventh in a series, I’ll examine multilingual IVAs and provide some insights that are applicable not just for Dialogflow, but for any IVA design and development effort.
The Simplistic Approach (That Doesn’t Work Very Well)
One way to create an IVA in a second or subsequent language is simply to take the training phrases, intents, and entities from the first language in which you created the IVA, pass them through Google Translate, and retrain the agent with these phrases, intents, and entities in the new target language.
Unfortunately, this really doesn’t work very well.
People say things differently in different languages, and while an automatic translation capability can get many things right, it is unlikely that it will be accurate enough to satisfy real customers. There are cultural factors that also come into play as well. One of these is the persona of the IVA. Your organization may be projecting slightly different personas in different languages or countries, and the IVA is going to need adjusting accordingly. Text-to-speech voice tone, quality, pauses, and gender also contribute to challenges when simply reusing an IVA in one language without tuning it specifically to another.
A Related “Translation” Approach That Doesn’t Work Well
Some chatbot creators have suggested that their bots can handle multilingual users simply by recognizing what language the person is using and then translating it into the IVA’s base language. The response, of course, requires translation back from the base IVA language to the user’s language. This is basically doing the same process mentioned above, except that the translations occur in real-time. Likewise, this method is not likely to produce great results.
A Better Way: Recreate, but not From Scratch
I learned of a better way to create multilingual IVAs from Mary McKenna, senior director of product management, and Valerie Bonaldo, senior market intelligence manager, at Interactions, an IVA provider. In our conversation, Mary and Valerie described several multilingual IVAs their company has created or is in the process of creating.
In one instance, a roadside assistance company that provides help for motorists in Italy is now expanding to France. The company had built an IVA in Italian that interfaced with motorists and could solve many of their needs automatically, including calling for in-person roadside assistance. The IVA mashes up the caller’s location with Google Maps and dispatches a service technician equipped with required service items or capabilities, all based on the IVA’s natural language dialog with the motorist.
The company wants to provide a similar IVA service for customers in France. Interactions is using a multistep process to create its client’s French language IVA, as follows:
Interactions reports some good news for multilingual IVR creation: Once you have an IVA working in one language, recreating it in another language is not as difficult as the original effort — presuming the original IVA provides a good foundation on which to build.
Nevertheless, recreating a bot in another language is going to require effort to craft a natural interaction in the new language — it turns out that localizing phrases, intents, and entities is far harder than just running them through a language translator. Incorporating the cultural differences is critical. However, Interactions’ customers are doing it with excellent results.
In a second example, Interactions told me about a credit union headquartered in the western U.S. This credit union has 740,000 members spread throughout five states. The company has created an IVA that can help people do automated banking functions in English and Spanish. Valerie played recordings showing me how the IVA identifies which language the person wants to use for engaging the IVA. The demo was quite impressive.
Getting Users to the Right Language in a Multilingual IVA
How do you invoke a multilingual IVA?
If you are using voice, one way to invoke a multilingual IVA is to provide different telephone numbers for each language supported. Another way is to use voice to tell people which language they can speak in — sort of like an IVR in which you might hear, “Press 1 for English; para Español, marca dos,” etc. Except in this case, you simply tell the IVA which language you want to speak in.
In the credit union example above, the IVA was able to automatically recognize which language to use simply by listening to one or two of the caller’s spoken words. The switch from English to Spanish, say, would happen immediately thereafter.
If you are using text chat for an IVA interface, there are several ways to determine the language to use.
If the user has selected a language for a website or an app, i.e. English or French, your IVA can interface with the website or app to know which language the person is using and use that language accordingly. Alternatively, the IVA can detect the language the user types or ask the user to choose from a menu of available languages for the bot engagement.
Conclusions
What’s Next
The final article in this series will appear in late December with a focus on IVA continuous improvement and the need for human oversight for ensuring good long-term IVA performance.

For more insight on AI in the contact center, join Brent at Enterprise Connect 2020, where you'll be presenting a session titled, "Conversational AI: Using Messaging, Speech, and Chat to Automate Customer Engagement," among others. Check out the full conference program here, and register using the code NOJITTER to save $200 off the current rate!