New Five9 CTO and head of AI talks about his career transition and the opportunities that lie ahead for him and the company.

Dave Michels
Five9 last week announced the appointment of Jonathan Rosenberg as its new CTO and head of artificial intelligence (AI). Previously, Rosenberg was the CTO of Cisco’s Collaboration Technology Group, where he was active with the development of Spark, now Webex Teams. Rosenberg’s move to Five9 is not completely surprising, as it reunites him with Rowan Trollope, who moved from Cisco last May to become the CEO of Five9. 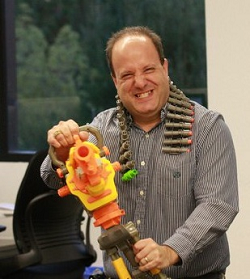 There are few executives in the industry as well-known as Jonathan Rosenberg. At Cisco he was highly visible at company and industry events. He has also been very active in standards efforts that have fueled industry transformation. He is most well known as the primary author of SIP, standardized as IETF RFC 3261 in 2002. Rosenberg has additionally been involved in the creation of many other seminal technologies, including WebRTC, SIMPLE, ICE, and IMS. He has held numerous leadership positions in the IETF, and with 70 RFCs, is the fourth most impactful author of Internet standards.