For those who have been on the lookout for the next big news from former Cisco exec Barry O'Sullivan, the wait is over with the announcement of Altocloud.

In November 2013, a No Jitter post discussed Barry O'Sullivan's announcement that he would be leaving Cisco for a software startup. At the time, we speculated on which market the new venture might tackle. Internet of everything, a cloud-based unified communications/contact center venture or a media venture were all possibilities discussed. Now we know the answer: Altocloud, with O'Sullivan as CEO, was announced today.

In the press release Altocloud is described as creating a cloud-based contextual communications platform that uses data analytics and machine learning to produce more effective customer-to-company interactions. The problem Altocloud is trying to solve is one that has been articulated for several years: the inability of companies to easily track a customer's journey across media and communications channels.

Even the simplest of purchases today might involve multiple components: It may start as a click-through from a link in a tweet that leads to an article about a product, which is followed by a search to find a retailer, where a live chat with an agent is requested before the customer ultimately purchases the product using ecommerce on the website. In this example, the "problem" is the lost opportunity to offer alternative or additional products that might fit the customer's need even better and/or offer additional revenue to the company.

Another scenario--and one where contextual analytics has the promise of improving the experience even more--might be a customer looking for product support. After trying FAQs on the website and a search engine for help on a product purchased in the last 72 hours, contextual communications could predict what this customer may need based on past purchase behavior, bringing past transactions and Web activity to the agent to shorten the time to resolution.

* Persona Clusters: Categorizing and segmenting types of customers
* Journey Patterns: Identifying important behaviors
* Action Maps: Defining and taking human and system actions based on who is calling (persona) and what they have been doing (journey pattern)

The analytics engine constantly evaluates new information--is continually learning--so as to fine-tune and add to the personas, journeys and action maps. The screenshot below shows how all of these elements are brought to an agent's desktop. The graphical representation of the customer journey shown is one of the elements that differentiates Altocloud from other analytics solutions attempting to address the same kind of problem. 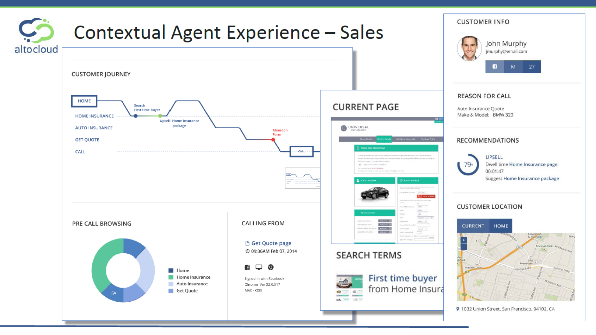 O'Sullivan started his career in the Nortel PBX business as it was taking on traditional analog players (e.g., AT&T) with a next-generation digital platform. He left Nortel for Cisco after 18 years and spent 11 years helping lead them to near-dominance as the market transitioned to IP communications. Now he's moving to Altocloud to bring long-promised context and real-time analytics for customer engagement to a broader market. Time will tell if he has not only correctly picked another market transition but has created a company to capitalize on it.

Rapid transformations in customer experience and how companies accelerated their digital transformation in the past year shaped the contact center world.

Twilio Flex One helps customers do more with less and helps support customers no matter what channel they come in on.

The contact center has largely been an island within the enterprise, but today customer service is no longer a place and occurs wherever there are customer touchpoints.