Sheila McGee-Smith
From personal experience, we all understand how the COVID-19 pandemic has affected work life. In March, Global Workplace Analytics estimated that just five million employees (3.6% of the U.S. employee workforce) worked at home at least half of their time. By the beginning of April, 42 of the 50 states had instituted shelter-in-place orders.
Contact centers have not been exempted from the workplace shifts. If contact center agents were working at all, they were mostly doing so from home. For the post part, companies that had agents working on cloud contact center solutions before the crisis hit were able to ensure business continuity by equipping agents to work from home (WFH). Some companies may have had to scramble to get laptops and headsets to their newly WFH staff, but the agents were able to use the same familiar interface they were already using in the office, minimizing service disruption. (For an example of a company that migrated to WFH with relative ease, see my recent post, “John Hancock Moves to Cloud Contact Center… Just in Time.”)
More than a month after the first countries and states here in the U.S. started shutting down, NICE inContact conducted an online flash survey of almost 800 contact center decision makers across three global regions. Its goal was to take a pulse on the service impacts of the pandemic, as well as to assess how the pandemic was likely to influence future cloud migration and WFH plans. Respondents broke down as follows: 94 from the U.S.; 103 from Canada; 300 from the U.K.; and 300 from Australia. 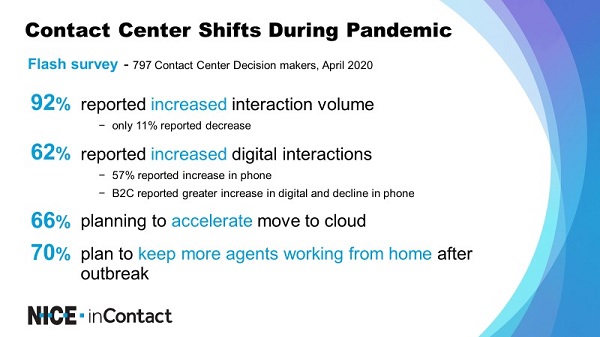 Interaction Volume
Many of us could likely predict the results of a question asking about the volume of interactions into contact centers compared to pre-pandemic levels. Ninety-two percent of the contact center respondents reported increased volume of interactions of all types. Only 11% of respondents reported a decrease in interaction volume.
By interaction type, 62% of respondents reported an increase in digital interactions, and 57% reported an increase in phone calls. Interestingly, respondents from business-to-consumer (B2C) contact centers reported a greater increase in digital engagement and a decline in phone interactions.
The increase in digital volume is likely related to the often-lengthy hold times consumers encountered when calling into contact centers during the early days of shelter in place. An April 14 Washington Post article, “Press 1 for frustration: Customers run into record phone waits as companies grapple with worker safety,” summarizes the frustration felt by so many. As the article detailed, customers attempting to call into contact centers to defer mortgage or credit card payments, collect unemployment, cancel airline flights, or locate missing shopping orders were stymied by the long hold times. Moving an interaction to chat, SMS, social media, or other digital channel may not have gotten you a response any more quickly, but it did free you up until someone responded.
Migration to the Cloud
While having a cloud contact center platform simplified the WFH transition, many companies still supported by premises-based contact center solutions were also able to support a remote agent workforce using their existing technology. Rarely, however, do companies working on legacy premises systems think that what they did is a long-term solution. Agents had to download, install, and often troubleshoot the setup. They also often had to learn a new application interface. The inherent burden on the agents, in turn, put a strain on IT staff.
Anecdotal evidence suggests that companies on premises systems will look to move contact centers to cloud-based software as a result of the issues faced when shelter-in-place orders were imposed. The NICE inContact survey offers a broader view. The survey shows that 66% of respondents whose companies are not using cloud today are planning to accelerate their move to the cloud as a result of the pandemic.
When analyzed further, respondents who already have their technology on the cloud are more likely to expect agents to keep working at home. Also, B2C organizations are most likely to believe agents will continue working from home.
WFH for the Long Term
Globally, businesses will likely still be operating under some level of shelter in place for an extended period. There will not be a rapid move back to centralized locations because the rules for opening offices are challenging to implement in many contact center environments. In the U.S. for example, the Centers for Disease Control and Prevention rules for opening offices include:
The NICE inContact survey data reports that 70% of contact center decision makers expect they will continue to have agents work from home after the initial shelter-in-place orders are rescinded.
While the data discussed here highlights the impacts on the contact center, the trends seen mirror those happening in the broader enterprise communications space. Read the No Jitter post, “4 Post-Pandemic Trends on the Rise,” for perspective from UC analyst Dave Michels, of TalkingPointz.