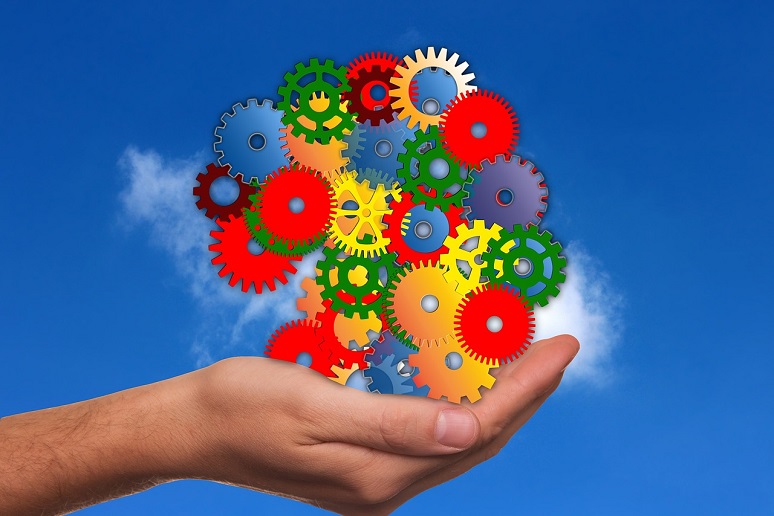 Earlier this week I shared the Salesforce point of view on the Service Cloud Voice announcement made at Dreamforce 2019, and promised more from Amazon Web Services’s perspective. But before we start, it’s worth reviewing the state of the Amazon Connect business. Why? Because, according to Scott Brown, head of go to market for Amazon Connect, the business has evolved in different ways than initially imagined.
Unexpected: Size and Source
One thing that is different about how AWS is approaching the market is in the size of the contact centers it is targeting with Amazon Connect. When AWS launched Amazon Connect in March 2017 at Enterprise Connect, he and his team believed the solution would find its niche in the small and medium-sized business market (perhaps under 250 agent seats), Brown said. He had visions of designing and scaling channel programs to bring Amazon Connect to the market. While AWS has seen success with SMBs, it has seen disproportionate interest from companies with tens of thousands of agents, Brown reported.
Reference customers like Capital One, Intuit, and John Hancock (quoted in the AWS press release about the Salesforce partnership) now define the market perception of the “typical” Amazon Connect customer. In addition, these larger, enterprise companies are driving the product roadmap for Amazon Connect. For the most part, Brown pointed out, these companies started with small implementations — proof of concepts or production pilots — that grew dramatically over time.
Another factor that is different than expected is where the Amazon Connect customer base is coming from. Brown and the rest of the team initially assumed that Amazon Connect would be most interesting to existing AWS users. Instead, there seems to be no strong correlation between being an existing AWS customer and selection of Amazon Connect. As an example, Brown pointed out that AWS has had success with Amazon Connect in Canada, despite not having as strong a presence there as other public clouds. As a result, AWS may be the only cloud workload a Canadian customer has on AWS. Brown also said that, for some companies, Amazon Connect becomes the first workload they take to the public cloud.
Continuing this theme of go-to-market, Salesforce becomes an ideal partner from the perspective of having and targeting a large enterprise customer base. Brown acknowledged, as does the market, the sophistication and prowess of the Salesforce sales machine. Delivering an integrated contact center as a service (CCaaS) that will retire quota for the Salesforce account team changes the game as millions of premises contact center seats migrate to the cloud.
Digressing to my conversations with Salesforce for a moment, Patrick Beyries, vice president of product management for Service Cloud, explained that the bigger goal for Salesforce is to sell more Service Cloud. It believes tying that sale to a voice solution is an important ingredient for success.
Voice-Only No More
In addition to the news of its partnership with Salesforce, AWS announced during Dreamforce that it is now offering chat. Amazon Connect natively supports inbound and outbound voice, chat, and Amazon Lex bots. Competitor dismissal of Amazon Connect as “just voice” must now be re-evaluated in light of its support of these additional capabilities.
The graphic below summarizes all of the features available with Amazon Connect on Salesforce Service Cloud and Sales Cloud. 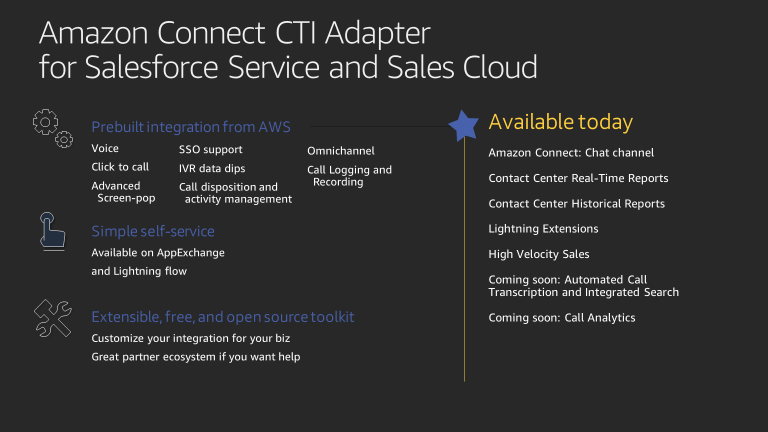 It is certainly too soon to tell how dramatically, if at all, the Salesforce-Amazon Connect partnership will impact the CCaaS market. We will all learn more as more details are released — both at AWS’s re:Invent conference next month and during the AWS keynote Wednesday, April 1, at Enterprise Connect 2020. The plan is for the joint features to be beta tested with customers in early 2020 and launched later in the year. My point of view is that these two behemoths understand the potential of this collaboration and are preparing to put the resources behind it to maximize the opportunity that it creates.

Hear from AWS live at Enterprise Connect 2020, and join Sheila McGee-Smith in her Contact Center & Customer Experience track for the latest technology developments and strategies. Register today to get our lowest rate, and use the code NOJITTER at checkout to save an additional $200.