Having started as a voice-only contact center service, Amazon Connect continues to mature, as shared at AWS's annual conference this week. 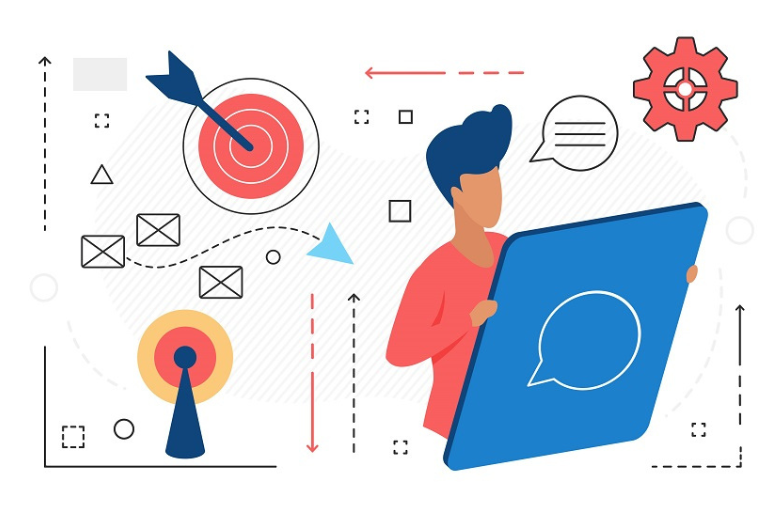 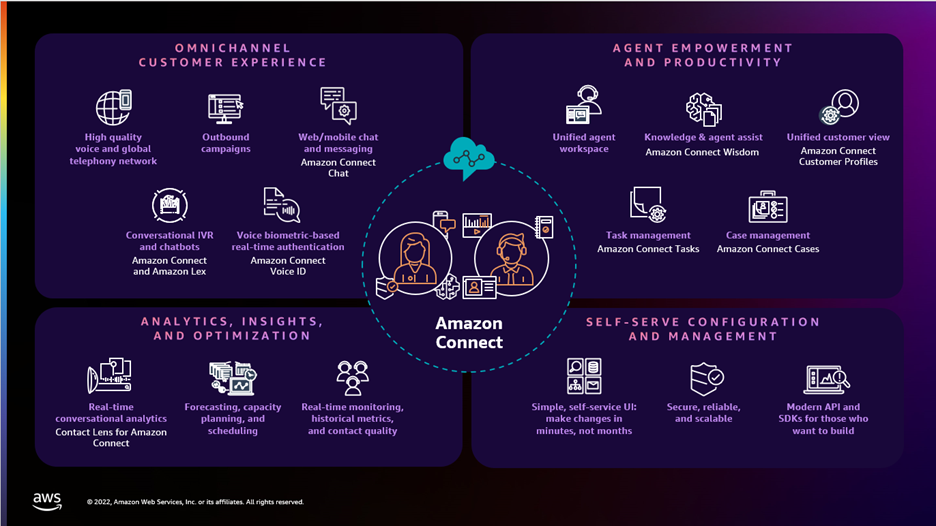 While all four elements have been part of Amazon Connect in some form since its inception, the categorization scheme — and the graphic listing many of the capabilities supporting each function — is a new way for the company to describe the increasing breadth of the portfolio. It also underscores how AWS’s contact center solution has matured over the years. Especially relevant in the last year or so has been the market’s desire for more and better agent empowerment tools — something that DeMaio and his team have had as a dedicated focus.
During his session here in Las Vegas, DeMaio reinforced that the direction of product development is primarily driven by customer request. “More than 96% of the features we have at AWS came directly from customer ask. We like to keep a few percentage points to do some innovation on your behalf,” DeMaio joked.
Two new capabilities announced at re:Invent are extensions of Contact Lens, part of the analytics, insights and optimization pillar.
Analytics for chat conversations is immediately available. This now extends to the chat channel a capability already available for Amazon Connect voice conversations. The preview capability shown in the slide, define agent evaluation criteria, provides what is colloquially known as “score cards,” or “evaluation forms” for evaluating agent performance during an interaction.
NOTE: The newest features announced for Amazon Connect are typically described as in “preview.” When a feature is in preview, there may be changes to the user experience, performance, and functionality as customer feedback influences and evolves the feature prior to general availability (GA).
Wilson from Saks was excited by the scorecard announcement, saying during DeMaio’s session, - half in jest - “Sign us up!” She explained that from a quality assurance standpoint, most companies - including Saks - are probably only evaluating about 5% of conversations. “Imagine a world with 100% coverage - that is truly transformational. We will be able to change the culture to be one of continuous improvement.” 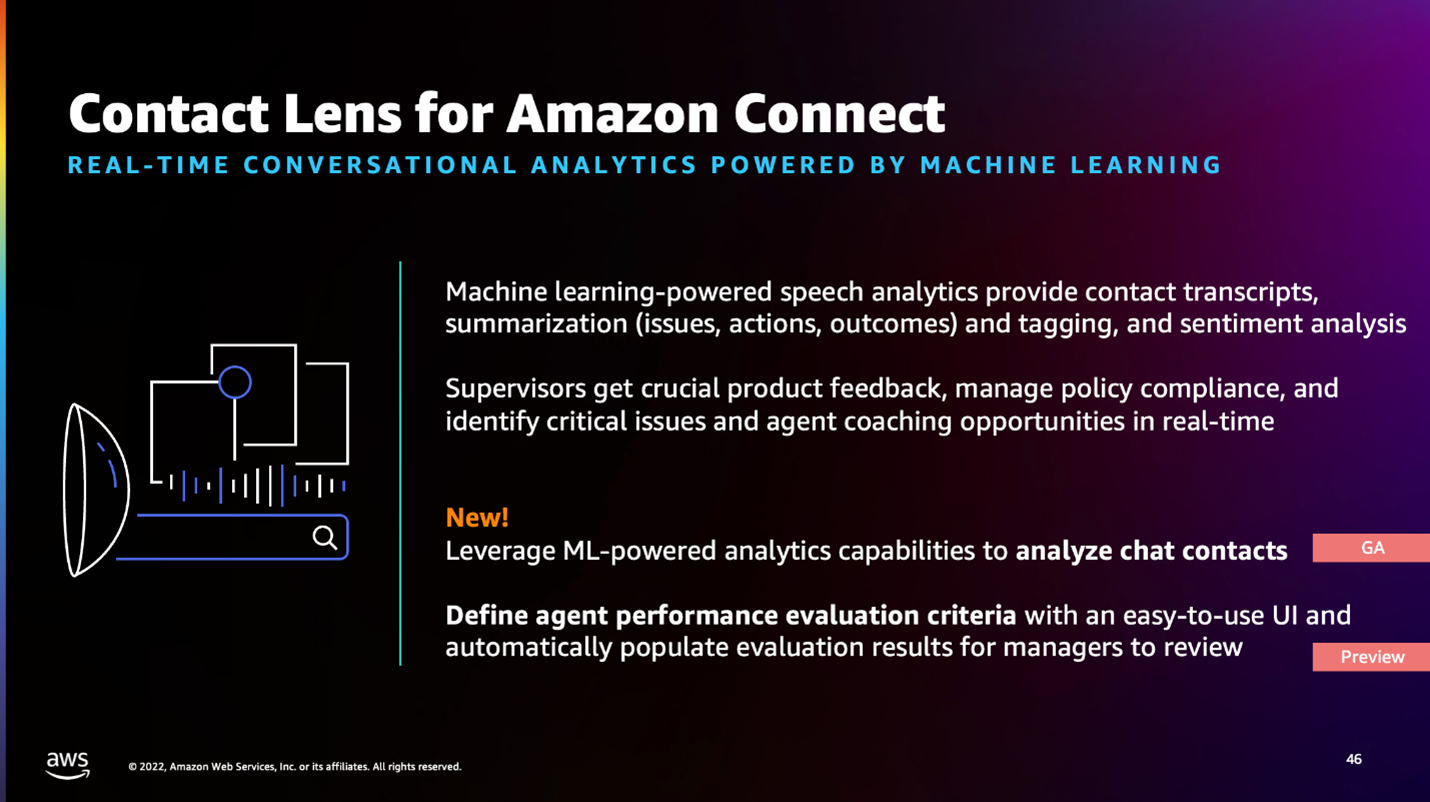 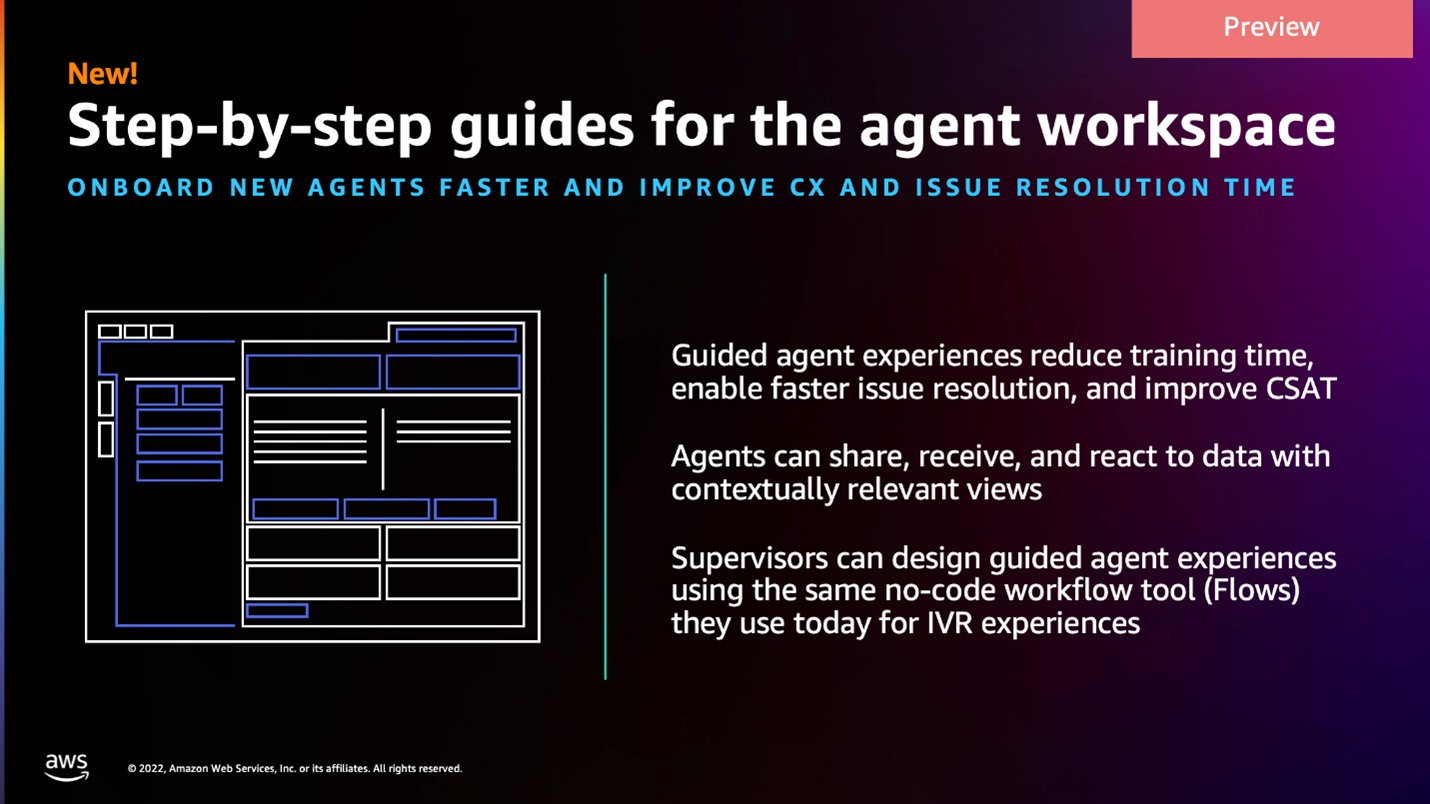 Earlier this year, I spoke to an Amazon Connect customer, Bryan Carey of Traeger, Inc., who described himself as more of a builder than a buyer of contact center technology. The customers who joined DeMaio on stage in Las Vegas this week exemplified both ends of the build versus buy spectrum.
Amazon Connect continues to mature, from a voice-only call center in 2017 to the full portfolio of capabilities we see today. At the same time, they have moved from being a vendor attractive primarily to companies looking to build customized contact center solutions to one equally attractive to those non-technical business users looking for off-the-shelf functionality.