Merger and acquisition activity in the cloud contact center market continues at a feverish pace.

On October 23, longtime player Five9 acquired the relatively new company SoCoCare. Faithful readers will recall that in March 2013 I wrote a post here on SoCoCare. It had recently launched its cloud-based, contact-center-at-the-core, social engagement platform.

It is likely because of the market awareness that SoCoCare has established in a relatively short time, that Five9 is highlighting that brand in the acquisition press release. But SoCoCare was one of three companies of an umbrella firm, Hyfiniti, all of them acquired by Five9. The overall mission of the ventures was to deliver "a more dignified customer experience" for social engagement, mobile care, and intelligent callback and routing. The brands in addition to SoCoCare are InAppCare and Hold-Free Networks. 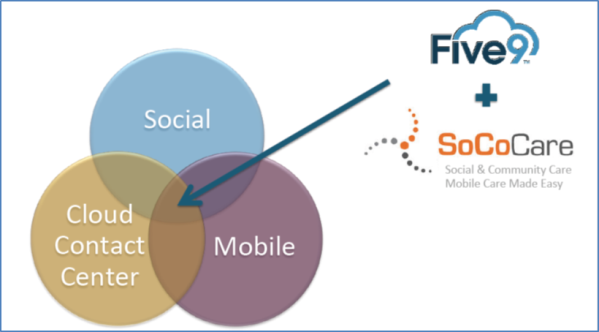 The graphic tells the story simply: this acquisition puts Five9 at the intersection of three of the major trends driving innovation in the contact center market today. But there are additional highlights as well.

* SoCoCare brings an executive team, which will join Five9, with a history of success in the cloud contact center market. Co-founders Lance Fried and Ed Margulies were executives at Telephony at Work, which was sold to Oracle in 2006, and both have had long careers in the space.

* Five9's CEO Mike Burkland said the technology that has been acquired will help power future innovation at the company. SoCoCare brings a patent portfolio as well as internally-developed natural language processing (NLP). Currently used in the social application, the NLP will be leveraged across other interaction channels on the Five9 platform to deliver context and sentiment analysis.

* One of the compelling attributes of both SoCoCare and the mobile application being acquired is the embedded analytics capabilities. Margulies reports that a company's pages can easily be tagged to collect data, giving insight into data that includes customer demographics and task completion with the app. With the information, companies are able to fine-tune in order to drive increased mobile application usage.

When I wrote about SoCoCare in March, it was in the context of a partnership it was announcing with another cloud-only contact center solution provider, inContact. Having successfully integrated to one cloud contact center solution, SoCoCare and Five9 product executives believe, will ease similar integration to Five9's platform.