Voice Calling: Critical as Ever at RRD

Despite one challenge after the next, a 2021 Enterprise Connect IT Hero Award winner keeps the phones ringing for thousands of remote workers. 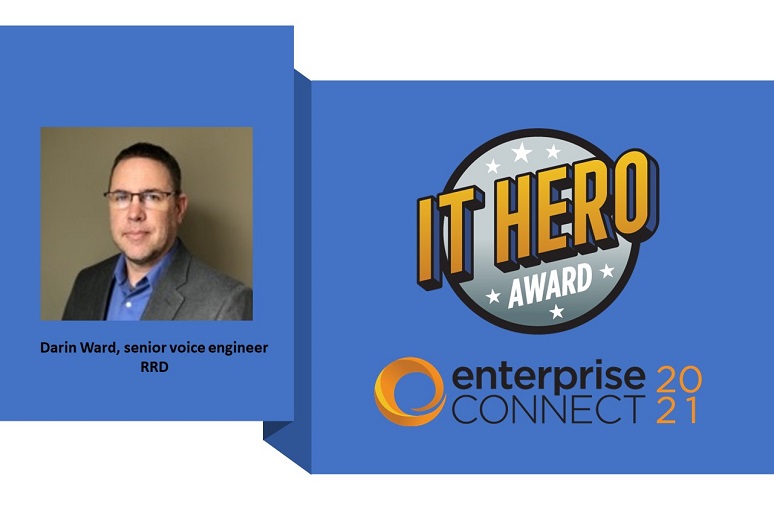 By official corporate title, 2021 Enterprise Connect IT Hero Award winner Darin Ward is a senior telecom engineer at multimedia marketing communications company RRD. Unofficially, however, he’s the telecom director, responsible for providing voice service to some 10,000 to 12,000 users in North America — along with all the forecasting, budgeting, vendor selections, contract negotiations, and so on that you’d expect in that management position.
In nominating Ward for this award, one colleague put it this way: “Darin is a one-man show. He supports the entire RRD U.S. VoIP phone system from inception to rollout and support and beyond.”
But, because Ward is literally a man alone supporting voice — that responsibility downsized over the years from a team of nine — he cannot have a manager title, Ward said. Granted, RRD outsourced tier-one support to a third-party vendor and billing and telecom expense management to another, but he does spend about 30% of his time managing those outsourcer relationships. “Honestly,” he said, “I could hire three or four additional folks and keep them busy 24/7.”
Good thing voice is Ward’s passion, and has been since 2001 or so when he took on a project to reduce costs for a phone system at one of RRD’s plants. The local director had committed to a 25% savings and Ward delivered 33% — and the rest is history, as he then worked the same sort of magic for one region after the next until corporate brought him on board in 2003. “And I never looked back.”
Over the years, Ward has ushered in plenty of change in RRD’s voice environment. For example, in 2018 and 2019 he upgraded just over 100 RRD facilities to cloud voice — a process he detailed in a series of No Jitter blogs after he completed the first 50 sites. For efforts such as this, Ward earned kudos from another colleague, who submitted a nomination calling out his “ability to manage large projects in a timely fashion while maintaining the upmost professionalism and willingness to educate.”
Unfortunately for RRD, the cloud voice service it selected was AT&T Collaborate, built on the BroadSoft platform subsequently acquired by Cisco. Without getting into the detailed backstory, suffice to say that things got a bit sticky as Cisco transitioned BroadSoft into its portfolio. One thing led to the next, and in the fall of 2019, at AT&T’s request, Ward gave up RRD’s largely unused licenses for a UC bundle that allowed people to make calls from their desktops.
Fast-forward to early 2020 and COVID’s arrival, “and I could see the writing on the wall. We were going to need those licenses” to support remote work, Ward said he remembered thinking. AT&T, however, had discontinued that UC bundle. So, being a quick thinker, Ward turned to what he considered the next best thing: a mobile app AT&T still offered as part of RRD’s basic license. To his voice users, he said, “Alright guys, this is the best we can do. Here’s a mobile app. Here’s how to use it. Here are the instructions.”
This is easier said than done. What it really entailed was long hours spent in compiling and distributing documentation for users based on what type of phones they had at hand, and given that RRD comprises literally over 100 different companies acquired during a 10-year stint what that amounted to was “every phone system under the sun,” Ward said. And he had to walk everybody through the shift from in-office to remote work. “If you’re on a Nortel system, here’s how to forward your calls to home. If you’re on an AT&T system, and it’s this vintage, you can only forward your calls to your home phone, but if you’re on a newer vintage, then you can … ring your cellphone and ring your landline and your office phone at the same time” and so on and on.
All was well until after the new year when Ward immediately began seeing a spike in trouble tickets regarding problems with the mobile app. Approaching AT&T about the issues, Ward said he discovered two things. The first is that AT&T had set the end of life for Collaborate and the whole BroadSoft platform for December 2021. Despite RRD having more than 100 sites running on the platform, Ward never received notice about this. Still, he said he wasn’t surprised — “I could read the writing on the wall.” The second, however, caught him off guard. On Jan. 1 of this year, in preparation for Collaborate’s end of life coming in December, AT&T turned off the server supporting the mobile app his voice users were relying on while working from home. With no warning and little explanation, Ward said he could only wonder, “Really? In the middle of COVID?”
Fortunately, in a manner of speaking, Ward had earlier vetted Google Voice for Workspace (see his posts here and here) for the migration of 125 sites sitting on really old, hard-to-manage legacy phone systems. Rather than being able to focus on those, however, he faces the — near-impossible job — of moving those 100 cloud voice sites served via AT&T Collaborate over to Google Voice. No doubt, given what his colleagues shared in their nominations, if anyone is up to the task, it’ll be him.
And for anyone who questions the importance of all this voice rigmarole, Ward had this to say:
“If you ask your average IT person or your average operations person [about the importance of voice,] they would say calling is diminished, replaced in this new world with meeting invitations and conferencing calling. But if you ask anybody on the customer side of the house, anybody in sales or support, they would say it's more critical today than ever.”
For profiles of all of our 2021 Enterprise Connect IT Hero Award winners, click here, and join in a roundtable discussion with them today, Tuesday, March 9, at 4:30 p.m. to 5:15 p.m. ET, during our Communications & Collaboration: 2024 virtual event.