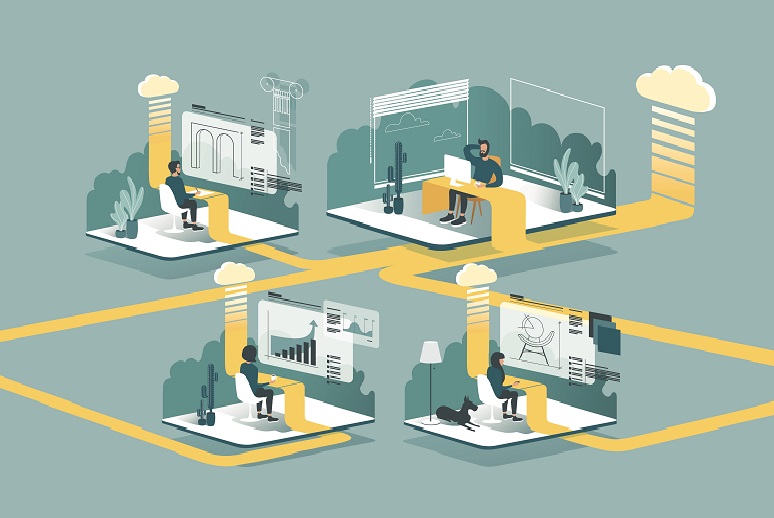 Image: PayPau - stock.adobe.com
In this week’s No Jitter Roll, we share the scoop on a cloud PBX integration, team collaboration, UCaaS platform updates, as well as vendor partnerships, and contact center solutions.
RingCentral Brings Voice to Microsoft Teams
RingCentral this week announced a cloud PBX integration for Microsoft Teams, the latest move the company has made to enable engagement and seamless connectivity among users across various communications modes.
For organizations that support the Microsoft team collaboration app but RingCentral for telephony, the integration means that users, regardless of whether they’re on the web, mobile device, or desktop, never have to leave the Teams interface to place a voice call now. RingCentral relies on Microsoft’s Direct Routing tools to support the native calling within Teams, and will deliver a full suite of functionality, the company said. Examples include unmute/mute, hold, resume, and transfer call controls; call routing to user devices; and native call recording for inbound and outbound calls, as well as contact center functionality such as IVR and call queues.
RingCentral’s cloud PBX service is available in more than 40 countries, with local and toll-free numbers available in more than 100 countries. RingCentral said it is rolling out the cloud PBX-Teams integration globally, but initially on a limited basis. General availability is expected to follow at a yet-to-be-determined date, RingCentral said.
Avaya, RingCentral Extend Joint UCaaS Platform
Separately, RingCentral teamed with Avaya this week in jointly announcing the geographic expansion of the Avaya Cloud Office (ACO) by RingCentral platform, with availability now extended beyond the U.S. to Australia, Canada, and the U.K. Since ACO by RingCentral became available in March, Avaya has added tools to assist with migration, device support, and telephony management, as well as support for over 130 integrations in the app gallery, the company said. Also announcing a promotional offer, Avaya said customers that sign up for ACO by RingCentral now will receive a free month of service and a 20% discount. Per terms of the promotion, new customers will get Basic Avaya Cloud Office Implementation at no charge, and discounts on professional migration services and select desk phones.
Facebook Updates Workplace App
Facebook this week revealed several features for its Workplace team collaboration app, including new capabilities for frontline workers and post types.
For frontline managers, Facebook is offering a new Areas feature that allows managers to provide Workplace access, via code, to frontline workers so they can view company information and connect with others in the organization. In addition, these managers will be able to send profile creation requests for these frontline workers to system admins, according to Facebook. For posting, Workplace now features Action Items and Achievement posts — the former for task management and the latter for sharing work milestones, Facebook said.
Support for Action Items and Achievement posts is available now. Areas will be rolling out starting next week, Facebook said.
UJET, Calabrio Team on Contact Center Capabilities
Cloud contact center provider UJET this week announced an integration with the Calabrio workforce management (WFM) and customer engagement solutions, per terms of a strategic and technology partnership between the two companies. Contact center support teams will have full access to the Calabrio One suite, which includes WFM, quality management, analytics and advanced reporting, the companies said.
This partnership follows on last month’s news that UJET raised $55 million in a Series C funding round led by Sapphire Ventures. UJET said it will use the funding to grow its domestic and international marketing teams and sales departments, as well as for R&D.
Revation Systems Updates UC Platform
Cloud communications provider Revation Systems this week announced version 9.1 of its security-focused LinkLive UC software for healthcare organizations and banks. This release features LinkLive Chat, to support one-on-one video visits. LinkLive Chat is included with LinkLive Suite, and is available for use on a desktop or mobile device, without users having to worry about downloads, apps, account, or password management, the company said.
Revation said. In addition, LinkLive 9.1 updates include:
LinkLive Chat can be used from a desktop or mobile device, and customers don’t have to worry about downloads, apps, account, or password management, the company said. This offering is included with the LinkLive suite.
IntelePeer Accelerates Customer Adoption, Omnichannel Deployment
For enterprises that lack in-house knowledge and technical aptitude, CPaaS provider IntelePeer last month announced the general availability of Atmosphere Managed Solutions. Through this full-service program, IntelePeer said it aims to help customers create self-service and omnichannel experiences. It will leverage its CPaaS platform to deliver advanced analytics, AI, and workflow automation. Customers will acquire training, onboarding, configuration solutions, and ongoing maintenance and gain access to IntelePeer’s AI optimization support, process integration, custom dashboards, databases, and web interfaces, the company said.
Ryan Daily, No Jitter associate editor, contributed to this article.
Join us for Enterprise Connect Digital Conference & Expo 2020 taking place online Aug. 3 to 6.Register now!

Refurbish and Refinish Your Cloud Strategy

Free license offers that resulted from COVID-19 are expiring. What should your business do now?

WebAssembly provides a way for enterprises to differentiate their services and how they connect with their customers.

Cloud Contracts: The Good, the Bad & the Ugly

Discover all you need to know about negotiating your next cloud contract from a leading UC consultant.

With a new unified experience and strategy for the future, Google is finally ready to go toe-to-toe with Microsoft.