Cisco’s approach is to create a degree of transparency between a private data center and the public cloud, taking advantage of the best of each. 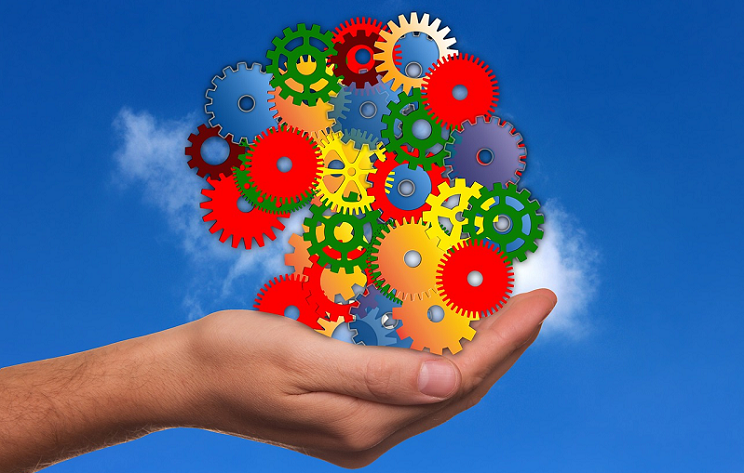 As the cloud continues to mature, the majority of businesses are leaning toward hybrid clouds. ZK Research shows that 86% of organizations intend to use a private cloud. Research firm IDC has this number at 90%. I’m not sure which is correct, but in many ways the exact number doesn’t matter as much as the larger trend toward hybrid rapidly becoming the norm. However, architecting a hybrid environment isn’t easy.
The definition of a hybrid isn’t simply using a private cloud for some things and a public cloud for others. That’s just two cloud islands. A true hybrid cloud is when public and private cloud resources are being used but it looks like one single environment to developers, IT professionals, or anyone else who might require cloud resources. This lets application developers build and run apps where and when they want. When a developer needs to waste cycles on where to build and run applications, that slows things down and causes businesses to lose money.
Cisco, Kubernetes, & AWS
This week Cisco introduced a new solution on Amazon Web Services that makes running containerized applications easy. The use of containers has exploded and is reaching ubiquity. A recent ZK Research study found that 74% of organizations already have containers deployed. Another 14% will utilize containers by 2020, meaning within 14 months only 12% of businesses won’t have containers deployed.
In theory, containers and Kubernetes bring private and public clouds together with a goal of increasing speed, portability, and scalability. In actuality, complexity takes a step function in growth as a number of new concerns are introduced such as scaling, security, compliance issues, and which development and management tools to use.
The Cisco Hybrid Solution for Kubernetes on AWS enables customers to run production-grade Kubernetes in their on-premises private clouds. This is done by configuring the on-premises Cisco Container Platform to be consistent with the Amazon Elastic Container Service for Kubernetes (Amazon EKS) by using Cisco’s Identity and Access Management (IAM) product. Customers can also deploy AppDynamics, Stealthwatch Cloud, Cisco CloudCenter and the CSR1000v to bring in aspects of application management and networking monitoring tools. 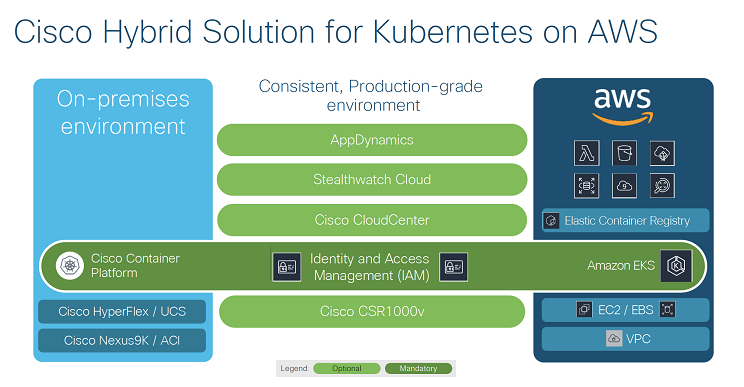 The most obvious benefit is that it helps developers speed up innovation and cut time to market, as they can deploy and manage containerized apps across the private and AWS cloud. IT also benefits from reduced complexity, as the hybrid cloud can be managed as a single environment. There’s also a benefit to the security teams as they have end-to-end visibility. This makes segmentation easier, and if a breach occurs it’s easier to find and isolate.
Cisco’s Unique Approach
The solution by Cisco is markedly different than the approach taken by VMWare and Microsoft, which also offer hybrid clouds. As I mentioned before, the goal of hybrid should be to make the public and private clouds look like one environment, and there are different ways of getting there. VMware’s approach is to extend the internal private cloud out to the AWS cloud. This has some benefits but does not let developers leverage innovation from anywhere. In a sense, it’s one big private cloud.
Azure/Azure stack is the opposite of VMware/AWS, as Microsoft pushes the public cloud stack into a private cloud environment, effectively creating one big public cloud. This offers tight integration but can be restrictive as to what can be run where.
In a pre-briefing with Cisco, executives told me their belief was that these environments need to have the ability to easily integrate with traditional IT security and management tools to support in-production environments, work across both existing applications and data sources along with new Kubernetes workloads, and be easily extended to work with other environments as needed.
This may look similar to the Cisco Hybrid Cloud Platform for Google Cloud announced earlier this year. That also focuses on Kubernetes and creates parity between the Kubernetes in a private data center on Cisco’s Container Platform and on Google Kubernetes Engine. The components of the solution are the same, but each cloud provider is different and requires its own level of integration. The Cisco IAM integration is specific to AWS, whereas the GCP solution includes other offerings such as Google’s Apigee API broker. The produce a similar outcome but have different components.
Developers should not have to choose between public and on-premises. Instead, they should be able to focus on building apps and have the infrastructure be invisible to them regardless of where the work is being done. Cisco’s Hybrid Solution for Kubernetes on AWS is worth looking at, as it gives customers the best of both worlds.