Dell Software enables comparisons of Cisco and Microsoft UC usage with addition of CUCM support to its analytics reporting and diagnostics tool.

Enterprises are increasing their efforts to consolidate UC applications onto a single-vendor platform, as Nemertes Research verified in its 2015-16 unified communications and collaboration benchmark discussed yesterday on No Jitter. So you might wonder, how are they deciding which apps to consolidate, for which users, when, and where?

From our own reader research, we know plenty of enterprises use UC capabilities from both Microsoft and Cisco. And from discussions with readers, we know that tensions often flare between those supporting UC from a desktop perspective -- i.e., Lync/Skype for Business -- and those approaching it from the purview of telephony -- i.e., Cisco Unified Communications Manager (CUCM). Talk of consolidation on a single UC platform, with the implied loss of power that means for one group or the other, can send fists flying.

Enter Dell Software, with its latest version of Unified Communications Command Suite, UCCS 8.1, introduced today. With the UCCS 8.1 release, Dell begins the process of transitioning from a provider of support tools specifically for Microsoft shops to a provider of tools for UC shops in general, said Michael Keenan, UCCS product manager at Dell. As a signal of that directional intent, UCCS 8.1 adds support for CUCM, the first of other non-Microsoft UC platforms that Dell ultimately expects to support with this management software, he added.

Initially, UCCS provides support for reporting call detail records on CUCM 8.6 version and later. Going forward, it will add support for quality-of-service measurements, or what Cisco calls quality of experience, Keenan said. UCCS collects the same type of data and uses the same naming conventions in reporting on these distinct UC environments. This enables UC managers to compare usage by service or platform in one dashboard, as shown in the examples below, whether they live in the Microsoft or the Cisco world, he added. 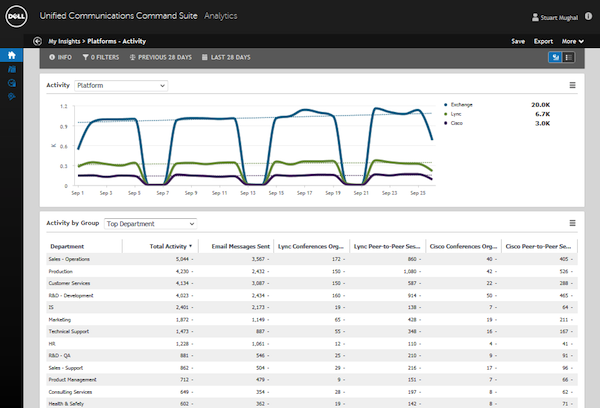 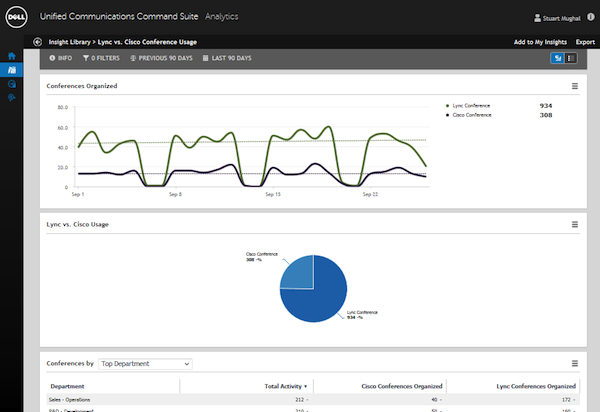 "We're putting together one single place that provides the ability to collect and compare the data so that everyone can have a conversation about what each platform does, who's using it, and what's the comparison, Keenan explained. "And we support chargeback and ROI capabilities on all of that usage, so everyone can compare what it's costing to run a Lync environment by specific calls, call types, departments, by region, by role, location -- any Active Directory attribute you can sync or filter on -- and pulling in the Cisco environment as well."

"A typical enterprise often has several different UC platforms deployed, and if that wasn't enough, each platform offers the end user a choice of many different communications modalities -- a way to communicate via audio, video, instant messaging, different conferencing options," he said. "When we talk about maximizing ROI for UC deployments, one of the problems is figuring out what's being adopted and what's being used, and to what extent, so you can decommission the stuff that's not being used and invest more heavily in what your users are adopting."

UCCS, beginning with the addition of CUCM, will provide the holistic insight necessary for strategic UC decision-making. It does this by integrating with Microsoft Active Directory so that it can "see exactly which departments, which individuals, which groups are using not only which platforms but which communications modalities."

UCCS 8.1 also adds in Office 365 native support for improved insight into Office 365 Exchange Online and Skype for Business 2015. With Skype for Business reporting, UC managers should be able to gauge the adoption rate of this latest Microsoft UC client, as well as conduct pre-migration capacity planning and usage forecasting, Keenan said.

From what I can tell, the ability to do an impact analysis prior to consolidating UC apps speaks to the need to "look from the end-user backwards," which Nemertes VP Irwin Lazar advised in the UCC benchmark report mentioned at the start of this post (read UC Consolidation Accelerates).

"If maintaining separate platforms, think about how that impacts usability, manageability, and cost," Lazar wrote. "If moving to a consolidated single vendor, think about how you will make the switch, and how you will address licensing, depreciation of existing assets, training, and integration between UC and other applications like contact center to guide your decision-making."

And, as Johnstone noted, the UCCS chargeback feature can provide a fairly good estimation on what your premises UC deployments are costing your company. "Then you can really make sense of whether to move your UC services to the cloud or keep them on premises."

Between the Great Resignation and pandemic-related supply issues, IT heroes have emerged to lead enterprises forward.