Every dollar of revenue Cisco earns on voice communications pulls through an additional $3 in network infrastructure revenue.
Allan Sulkin

At the recently held Cisco conference for financial analysts, the following data was presented in support of its spectacular growth record for enterprise voice communications:* There are more than 100K Cisco Collaboration customers worldwide (note how they are no longer referred to as UC customers).

* The Cisco customer base includes more than 85% of the Fortune 500.

Cisco's Unified Communications revenues increased more than sevenfold between 2002 and 2009, a financial growth record driven by a threefold increase in market share from 9% in CY2002 to 28% in CY2008. Cisco also claims that its market share reached 30% during the last reporting quarter of Q3CY2009. Though these figures are higher than the market share I estimate for Cisco, there is no disputing the highly positive growth trend. Their quarterly telephone shipments approximate a classic exponential growth curve through CY20008, though even Cisco's growth during the last year has been hit by the down economy.

What really stood out in the presentation regarding Cisco's voice communications business is how it drives other product revenues. According to Cisco there is a 3:1 pull-though impact (see chart below). Competitors sometimes argue that Cisco offers steep discounts on its telephony offerings; we now know why they are smart to do so. A customer invested in Cisco voice solutions is more than likely to invest in Cisco networking and other products while remaining a strong Cisco shop. 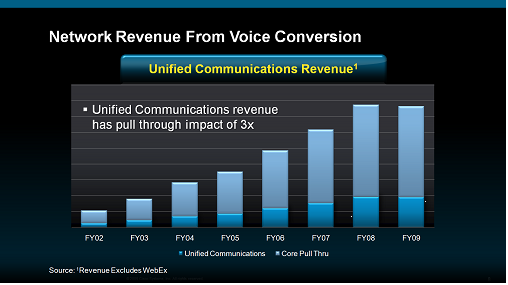 Unified Communications, one of the key elements of Cisco's Advanced Technologies, was a major driver during the past decade to expand the use of the Network and in the process sell more Cisco networking product. Cisco plans for the next decade are to expand the Network's strategic relevance, drive major market transitions, and build new billion+ dollar businesses. Cisco's recently announced Collaboration initiative, reported on this website, will be a key component of the corporate growth strategy. Cisco Collaboration services centrally hosted by either a customer or third party will also help ease Cisco's entry into the data center market, a market they are eagerly attacking now with their Unified Computing System. Cisco's servers are designed to work very efficiently with their networking equipment, giving them an edge against the competition.

Cisco is slowly, but surely, putting together many of the enterprise IT pieces of the puzzle with the intent of being a market leader in each segment. When John Chambers, CEO, tells an audience that Cisco enters a market with the intent of gaining a 40% market share it is not just an idle boast. If they are driving to a 40% share in enterprise voice communications, then the competition better watch out and protect their installed base with all their might. Taking into account Microsoft's plans to succeed in the market, the future outlook doesn't bode well for the traditional PBX system supplier establishment. And let's not speculate just yet about Google going after the market sometime in the next few years. Competition during the next decade will reach new heights for enterprise communications.