The company hopes ease of use and broad integration with the elements of collaboration will drive consumer/BYOD-style adoption by users.

In many ways, Cisco's Project Squared looks like a snapshot of the state of the art when it comes to enterprise communications and collaboration. The newly-announced mobile/video/collaboration app implements many of the key concepts that have emerged for next-gen collaboration, all wrapped up into a single app:

* It focuses the collaboration experience within a virtual "room" that each user sets up for him-/herself;

* It's an application from an enterprise communications platform vendor that is, at best, loosely connected to the vendor's core UC platform, forsaking decades of vendor attempts to "own" the end user via proprietary protocols to the endpoint;

* It attempts to deal with the phenomenon of BYOD/Shadow IT by essentially surrendering to it and trying to create an application that the vendor hopes will prove as compelling as the best consumer apps, while still being built to the requirements of enterprises.

* It emphasizes mobile and enables video, using the cloud to deliver these capabilities.

Cisco collaboration CTO Jonathan Rosenberg demo-ed Project Squared for my colleague Michelle Burbick and I at this week's Cisco Collaboration event; he explained that the effort, which he spearheaded, has been two years in the making, and was a big part of what he was brought back to Cisco from Skype to lead. The app is available on the app stores for both Apple and Android, and will come in a free and a paid enterprise version. 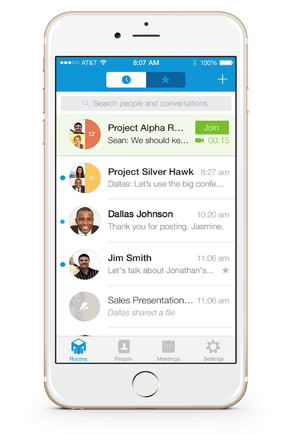 The basic unit of activity in Project Squared, as in many collaboration systems is a "room," to which the individual user can invite colleagues for some kind of group communications and collaboration. This kind of a "meet-me" point goes back at least to the audio conference bridge passcode, and to WebEx; newer cloud or web-based multimedia conferencing systems like Acano also base their collaboration model around the individual's personal "room."

However, instead of having just one room, Project Squared lets a user create as many different rooms as they want. A room might be dedicated to a particular workgroup or project, and all the messaging in the room is persistent, so you can follow the activity in the room over time.

This makes the Project Squared room seem more like a social space than a traditional conference bridge. However, Rosenberg said that any such resemblance is at most superficial--despite such "social aspects" to the app, "We are not in the business of providing a 'Facebook for Enterprise'"--or, for that matter, a Cisco Quad/WebEx Social kind of social tool.

1. Iteration--The use of next-generation software development tools and techniques. Rosenberg expects Squared to follow the rhythm of many apps you find on app stores today--the developer releases the app, makes changes or upgrades, measures the success of these changes with users, and releases another update within a matter of weeks. In other words, lots of iteration, a far cry from traditional enterprise product cycles.

2. Security--There's been a lot of talk here at the Summit about the lengths Cisco went to in order to make Squared secure. Cisco's senior VP and GM for collaboration, Rowan Trollope, said security was the number-one issue the development team tackled. All data is encrypted end to end, with Cisco even pioneering techniques in cryptographic technology for underlying Javascript, as well as in key management infrastructure and approach.

3. Fusion--Cisco uses the Collaboration Cloud to integrate not only with WebEx, but with Active Directory, and is working on Exchange integration--and those are just some examples of how Cisco is attempting to integrate with any service element, regardless of vendor. Microsoft, said Jonathan Rosenberg, are "first class citizens in our Collaboration Cloud infrastructure."

4. Ecosystem--Cisco says it will give its channel partners the tools for manageability and differentiation when they start to roll out the full Squared enterprise app. This was the area where Trollope, Rosenberg, and the rest of the Cisco execs here were least specific. They gave no details on the exact go-to-market strategy for Squared, except to say that it would be through their channel.

As far as the user experience goes, Rowan Trollope demo-ed its ease of use by taking a volunteer from his keynote audience and getting her signed up and starting her own "room". To do this, he took her email address, sent her an invite, and told her to take over from there--get into the app, set up a room, take a picture of him on stage and post it to the room's content stream. She set to work on it and Trollope continued his presentation. Six minutes later, the monitors in the keynote room showed Trollope logging in, opening up the room she'd started, and displaying the picture she'd posted there.

So, much like Unify's Circuit, part of the new way of doing things with Squared is that it's available to be used by people who don't belong to the enterprise that owns and uses the app. The Squared interface will flag any user in a room who doesn't work for your enterprise, so that other participants in the room can observe whatever governance rules may apply in terms of sharing internal content.

Within a Squared room, users can start a video call, and they can also post content like slide decks. A partnership with cloud storage company Box, which was also announced here today, lets documents and other content appear directly in the interface, without needing to be downloaded. And though Cisco followed a "mobile-first" imperative when starting on the project, Trollope also demo-ed Squared on an Apple laptop, first as a discrete application, then as a WebRTC-enabled website.

Conclusion
The app's name comes from Rowan Trollope's edict to his team that the product they were developing had to be not just a little better than existing collaboration apps, but an order of magnitude better. The other crucial imperative was not to create another island of collaboration, but to integrate with the existing tools a user has, to make the whole thing work better.

Here at No Jitter, we've been writing quite a bit about the past failure of mobile UC clients to gain traction among end users, as well as about IT managers' growing desire to get mobile UC deployed. Cisco gave no indication here that it's giving up on Jabber as a mobile UC client, but Jonathan Rosenberg made it clear that he sees Squared as the way to get UC--in the broadest definition--working on mobiles.

But Cisco also isn't thinking about Squared as the tool for every user in every enterprise. Rowan Trollope said it's better to think about Squared as a tool for those engaged in "team-based collaboration." Cisco is hoping that for these users, the app's design, ease of use, and broad integration features will help it fulfill a notion Trollope floated at Enterprise Connect in March: The "death of deployment." In other words, IT won't have to push Squared on the users; users will seek out Squared and adopt it, as they do their consumer apps.