Since the day he took the CEO position at Cisco, Chuck Robbins has been shuffling the executive cards at Cisco. Last week, he continued to re-tool the company by adding a couple of new people and reorganizing other groups. Here is a summary of the changes and the impact to Cisco.

Cisco's Internet of Things (IoT) portfolio (formerly under Rowan Trollope's purview) and the AppDynamics team will transition to David Goeckeler and be part of the Networking and Security Group. Given the data and insights that AppD generates, one could argue it should always have been part of this group, as it can be used as a core component of Cisco's security strategy and its Network Intuitive intent-based network solution. When AppD was purchased by Cisco in January 2017, one of Cisco's security leaders told me at the time that he felt it belonged in the security group, so perhaps its in a better home now.

As for IoT moving over, this was a bit of a surprise, but it's more an indicator that IoT is moving out of the early adopter phase into the mainstream. Now that it's being operationalized, Cisco needs to ensure its network and security products have the right hooks and levers to enable its customers to accelerate IoT adoption and for the Cisco network to be leveraged. This also helps align IoT with Susie Wee's DevNet activities.

As for Rowan Trollope, the Cisco leader with whom the UC industry is most familiar, he will continue to push the Collaboration business unit into new directions. The competitiveness in collaboration is going to be kicked up a notch in the next few years as artificial intelligence (AI) becomes a bigger part of changing how we work. And, no doubt, Rowan's vision and leadership is needed here.

Trollope will also be leading Cisco's charge into new technologies, which is ideal for him, as there is no one at Cisco better at taking things that are complicated and technical, and making them easy for people to understand and easy for customers to deploy and consume. The first action item on his agenda will be taking the work that has been started by Hilton Romanski's team on blockchain and bring it to the next level. In my discussion with Cisco leaders I have brought up blockchain a number of times and urged them to lead this market instead of letting other vendors control the narrative. This happened with SDN and SD-WAN, and it's important for Cisco to get out in front of it this time.

What might Cisco be looking to use blockchain for? This week provided a hint of one possible use case, as the U.S. Patent and Trademark Office released a patent application that Cisco filed in December 2017, which describes how the company would use blockchain technology to better secure group messaging, Smartereum reported.

It appears that the patent proposes creating a peer-to-peer network between the group participants through the use of cryptographic keys. The benefit of this is it would create a group chat where security has been decentralized and the only members that can join are the ones that are pre-authorized. Blockchain would act as a secure ledger of sorts where it would track members that have permission to join and ones that have been removed. The initial participant's device would create the genesis block, and new blocks would be created as members are added into the group. In this particular case, blockchain is being used to secure membership, but it can also be used to protect messages or file sharing.

One of the underappreciated aspects of Cisco's Spark product versus most of the other team collaboration products is how security focused Cisco has been as it's brought the product to market. At Enterprise Connect 2018, Cisco VP and Collaboration CTO Jonathan Rosenberg focused much of his keynote on this topic, as I outlined in this No Jitter post (you can also watch Cisco's keynote here).

I'm guessing the vision with blockchain starts with Spark, because it's the thing Rowan Trollope knows best and has been thinking about for some time. Blockchain holds a tremendous amount of potential at Cisco to secure IoT communications or messages being sent between network devices. For example, take Cisco's intent-based network solution, Network Intuitive, which relies on a centralized controller pushing automated commands out to network devices. Blockchain could be used to decentralize and improve security.

Blockchain is something Cisco should be actively talking about, and there's no doubt in my mind that Rowan is the right guy to tell the story. 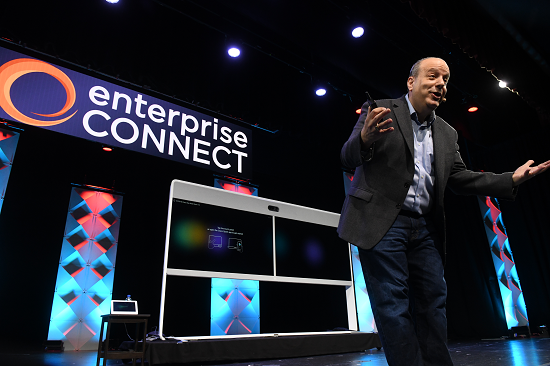 Also coming to light last week, Gerri Elliott will become Cisco's first-ever EVP and chief sales and marketing officer. Like all Cisco executives, Elliott has a strong pedigree in networking and software, with stints at IBM, Microsoft, and Juniper Networks. I've seen some news stories saying she is replacing outgoing global sales leader Chris Dedicoat as he transitions into his advisory role. However, the job is more than that as it rolls up sales and marketing into one, the first time Cisco has done that.

Cisco has always been a sales execution machine -- particularly under Dedicoat -- and has had strong marketing, but the two haven't always been aligned. By rolling both up to Elliott, this should no longer be an issue. Current CMO Karen Walker will report into Elliott, as will chief communications officer, Oliver Roll, who heads up Investor and Public Relations as well as the Analyst Relations team that won the IIAR AR team of the year for 2017.

New Customer-Focused Leadership Role Emerges
Maria Martinez will join Cisco in the newly created role, EVP and chief customer experience officer. She comes to the company from her position as president of Salesforce Customer Success Group and Success Cloud, so she certainly knows customer experience. Her role will also encompass leading the services organization, which has been led by SVP Joe Cozzolino for the past three years. One of the hallmarks of Cisco historically has been its dedication to customer service, so it's not surprising the company hired someone to lead that area. What's more surprising is that the company has not had this position before. Also, Cisco has shifted to a service-led organization, so rolling up customer success and services under a single leader makes complete sense.

As for my fellow Bostonian, Joe Cozzolino, he will turn the reigns over to Martinez as the services business looks to move into its next phase. From what I understand, he will remain at Cisco but in a capacity yet to be determined (or at least yet to be announced). I've known Joe now for a number of years and he is as strong a leader as there is at Cisco, so I have no doubt he will be smoothly transitioned into another role where he will have as big an impact as he did with services.

Why You Need to Be at Enterprise Connect 2021

Get a handle on five key themes reshaping communications and collaboration.