Centrex: The Cloud That Failed

IP Centrex never went anywhere. And Nortel is not even in business anymore. How could such a great strategy fail before it even got off the ground?

“The cloud? You know it is just Centrex all over again.” - Anonymous

I credit "Anonymous" because I have heard it said so many times by so many different people that it makes my head spin. I understand why it has been said and why it continues to be said, but there is a massive difference that separates Centrex and the Cloud into different universes.

Fifteen years ago this very week I found myself in one of the more beautiful spots in the country: the Broadmoor Hotel in Colorado Springs.

Not only was it my first conference, it was one of the best I have ever attended. And while that had something to do with it being located where it was -- as well as the tie in with Nortel-sponsored Indy car that raced on the final day of the conference -- the subject matter was equally impressive.

The theme for the conference was "Centrex Unlimited." Ok, I know that doesn't sound impressive, but the content was fascinating. The idea was to deliver existing Nortel DMS-based Centrex offerings over IP networks. By using VoIP, they could leverage central office-based applications such as speech recognition, call center, collaboration, and wireless integration and extend them to users everywhere – be they telecommuters, road warriors, or regular office workers.

Sound familiar? In essence, Nortel gathered us together in the summer of 1999 to pitch Cloud-based UC. Sure the guts were different, but the concept was the same.

And the concept was absolutely spot on. I am not just saying that in retrospect; we were genuinely excited about the possibilities such an industry shift could offer. Sure there were issues that had to be ironed out, most notably 911 support, but the idea of a centralized service where endpoints could be deployed anywhere with minimal capital expense was intriguing. And don't forget, this was before Cisco had a viable VoIP product on the market, so it was indeed pretty cutting-edge technology at the time.

I hate the phrase "game changer," but I remember even at the time briefly thinking that is exactly what this was. I saved the slides (remember when we used to get a binder with the slide printouts?), and I was able to recover them from deep inside the Wassaw Consulting archive room. If you change the word Centrex to Cloud, you wouldn't know it was 15 years old (see diagram from the conference). 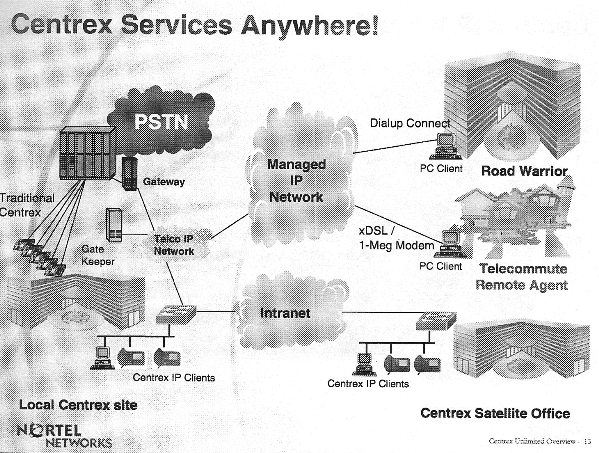 So what happened? IP Centrex never went anywhere. And Nortel is not even in business anymore. How could such a great strategy fail before it even got off the ground?

The answer is simple. So simple, it was even evident to a relative youngster at his first conference 15 years ago. It was hard to tell them the truth – they had such a great concept and had gone to great expense to host a first class event to share it. But the truth was their entire deployment model was going to be driven by the LECs – the "Baby Bells" as they were called at the time. Since this was a Central Office-based play, there was no avoiding it.

First of all, we didn't think it would even see the light of day. Despite our enthusiasm, we knew the LECs would not have any serious interest.

Secondly, if it did, the LECs would either price it too high or dumb it down so much that it would not be useful. Or both. This was clearly the case at the time with Centrex. In some regions of the country, despite its feature set, Centrex was sold and bought purely as cheap dial-tone, even installed as trunking for phone systems. In other areas, it was priced so highly that it was rarely cost effective as a true PBX replacement. Not to mention the fact it was difficult to manage and limited in features and integrations.

Fast forward 15 years. While Nortel is gone, Cloud-based communications are thriving. Economies of scale and data center efficiencies are driving costs down. Competition is driving product development and ease of use. And where is the competition coming from? Startups and software companies.

While we all recognize these trends, the point here is we continue to see very little competitive pressure from the "Big Bells." And that is okay! We now have a delivery mechanism that, for the first time ever, is NOT entirely dependent on "The Phone Company."

Until recently, we have never had real competition in telecommunications services. Even the CLEC days provided only minimal pressure, and it was mostly financial. Which is why things like dial tone and phones have changed very little in the last, oh 100 years or so.

Now that innovation is being driven by competition, we are all struggling a bit on how to shake off 100+ years of limitations to embrace a new universe of possibilities. That will take time and will ultimately be driven by a generation that has no knowledge of things like switched telephones and PBXs. They will have no use for mail, nor for its electronic stepchild, email.

We look at the market as having gone from one phone company (in essence) to tens, if not hundreds, of cloud providers. But the paradigm of our world is moving rapidly from infrastructure-centric to app-centric, the implications of which we are not yet grasping.

I think we all get that things are changing rapidly and we are approaching a tipping point as the demographics in the workplace evolve over the next 1-2 decades.

Until then, we - living in this limbo land of old and new - are charged with continuing to push the industry forward: to leverage what has always worked, mixed with the possibilities this new world offers. The challenge and opportunities are both huge.

I would really like to get back to The Broadmoor. If anyone has a great idea they want shot down, please let me know.