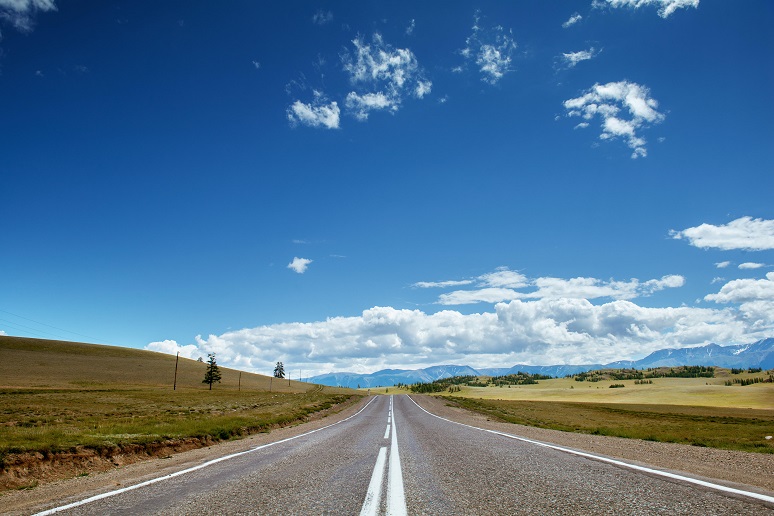 Image: Dmitry Molchanov - Alamy Stock Photo
An often-heard insight from industry analysts (like me) is as an enterprise moves its contact center from on-premises systems to the cloud, don’t re-create the current operation like-for-like. Instead, companies should think of migration to the cloud as a moment to re-evaluate how its interactions are being routed today – to metaphorically cleanse the system of any configuration baggage that has accumulated over as long as 20 years. There will likely be opportunities to incorporate technologies that were not even available when the initial contact center system was installed. A clean slate is the best place to start.
Another reason companies should avoid a copy/paste of the current configuration is that today’s legacy contact center systems typically require complex workarounds to accomplish what is much easier to do with a modern contact center as a service (CCaaS) solution. For example, an Avaya contact center system installed over ten years ago may now have hundreds, often even thousands, of vectors used to route calls to hundreds or thousands of agent skill groups, and some of those vectors and agent groups may be dedicated to contact center campaigns that haven’t been deleted since falling out of use. We could say the same goes for most premises solution, e.g., Cisco, Genesys, Mitel, etc. But how does a company avoid replicating existing issues?
Last week at the Five9 CX Summit, I met with Jason Owen, CEO and co-founder of Blackchair. Blackchair is a partner of Five9 but Amazon Connect, Avaya, Genesys, and NICE, among others. Founded in 2005, the company started as a contact center professional services consultancy. Owen described Blackchair at the time as an “international rescue team…we were the guys who you called when something had gone wrong. We were level-eight technical people .”
Blackchair discovered that the team would fix the immediate issue a contact center was having (e.g., someone deleting all campaign records). But a month later, the contact center would call them in again on a different issue. Owen and his team decided to build a piece of software to create an audit trail of changes. This audit capability is now a core component of their three solutions known as Clarity (Pre-migration Forensics), Assurance (Automated Migration to CCaaS), and Symphony (Day 2 CCaaS Operations).
All three solutions, and the purpose of each, are described in the graphic below. 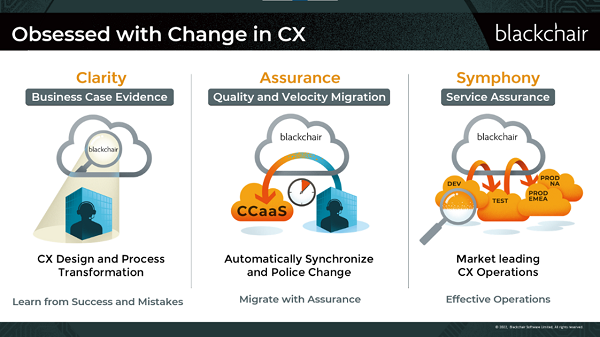 Blackchair Clarity is used to analyze existing premises contact center environments and identify orphaned and unused elements of the configuration—increasing clarity and understanding of the existing platform and reducing the configuration amount to migrate to the CCaaS platform.
Using more colorful language than I can transcribe here, Owen exhorted, “Please do not go to a new contact center unless you've cleaned up first. Have a bath before you go. Clarity is the bath. If you don't learn from history, you’re going to repeat the problems of today in your new contact center.” You can then use Blackchair’s Assurance solution to migrate those aspects of the now “cleansed” system that should transfer to the new environment.
To illustrate the power of Blackchair Clarity, Owen sent me an anonymized Clarity report. It showed a company with over 8,000 Avaya vector directory numbers (VDNs) defined in the system. 45% of the VDNs took no calls; another 25% took less than 100 calls in a six-month period. 28% of the VDNs were handling the brunt of the routing in the system. As described in the graphic below from another customer, 72% of the configuration was irrelevant.
During our meeting, Owen and Eric Entzeroth, chief revenue officer, Blackchair, emphasized that Clarity reports are data-driven. Opinions – based on their experience of helping 200+ companies migrate to CCaaS – come into play with respect to go-forward recommendations and best practices.
Working with their CCaaS partners, Blackchair shared results from companies big and small. The graphic tells the story of a company with 25,000 agents that found that 90% of the current configuration data was irrelevant. But smaller contact centers are benefitting as well. Auditing a two-year-old, 300-agent solution revealed the agents no longer aligned with interaction demand and self-service. Also, virtual agent interactions goals weren’t realized, and customer experience (CX) managers were stressed trying to hit service goals. 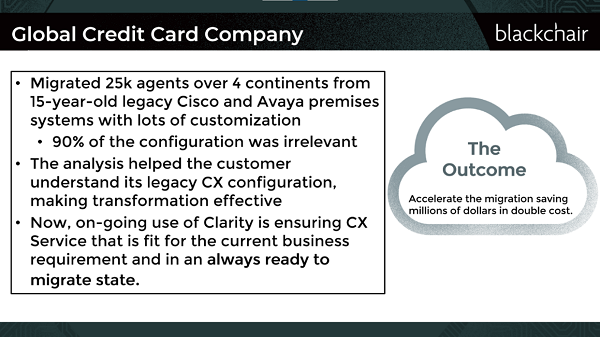 I asked Entzeroth who Blackchair competes with, and he responded that they were not aware of another company that offers a data-driven model like Clarity. He described their competition as human-intensive, requiring a lot of manual examination of reports, typically done at considerable expense by large systems integrators. This approach in pre-migration data forensics sounds like the difference between taking a bath and picking the dirt off granule by granule.