UC-IoT, CCaaS, and a consolidated workspace were highlights on the company’s presence at this massive Middle East tech event. 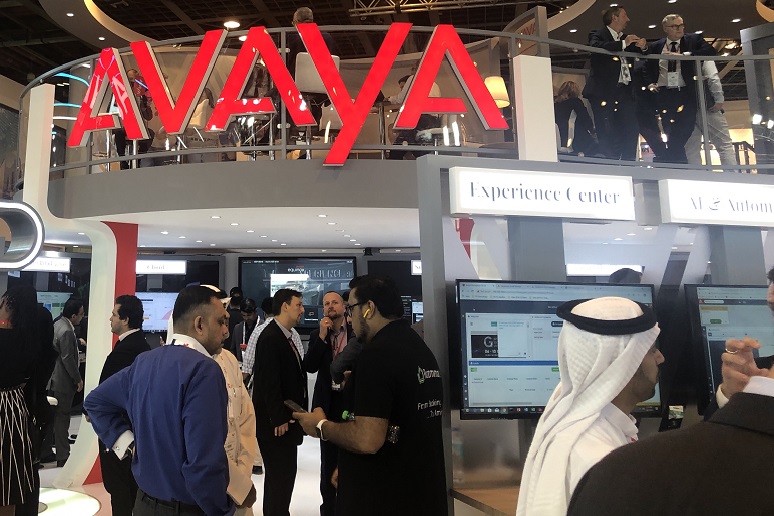 Most vendors bring their best to the Middle East’s massive GITEX technology exhibition, and such was certainly the case for Avaya at the 2019 event, held earlier this month.
Avaya is well-known among enterprise-class companies, and that customer set was the focus of much of the innovation Avaya showed at its GITEX booth. UC-Internet of Things (IoT) integration, contact center as a service (CCaaS), and a consolidated workspace were highlights at the Avaya booth.
Avaya Flexed its UCIoT Muscles
For years, I’ve been using the term “UCIoT” to describe the coming together of UC and IoT, a technology combination I’ve long believed has game-changing potential. UCIoT should be part of every organization’s digital transformation plans. The problem is, most UC vendors haven’t built much of a strategy around converging UC and IoT. In fact, last year I interviewed all major UC and UCaaS vendors regarding their UCIoT strategies, and discovered that only Avaya and Mitel have formal programs.
At GITEX, Avaya demonstrated a number of capabilities in smart healthcare, smart cities, and smart education. In one of the more interesting demos, it showed how a healthcare organization could send status updates from a connected defibrillator back to a central location using a mobile or team messaging app. Emergency teams receive moment-by-moment information, only dispatching a crew when necessary. This saves time and money compared to today’s process, in which removal of a defibrillator from its case triggers dispatch of the emergency team.
Avaya Launches CCaaS on Microsoft Azure
This announcement, covered in this earlier No Jitter news piece, got the most headlines for Avaya out of GITEX. Long a contact center powerhouse, Avaya has some big potential in its new IX-Contact Center (IX-CC) on Azure offering, as a complement to its ReadyNow Private Cloud and other solutions. While ReadyNow Private Cloud is popular with many of the large banks, healthcare organizations, and other enterprise-class companies in the region, IX-CC is geared to the needs of small and medium-sized enterprises.
A cloud-native CCaaS platform, IX-CC offers customers fast deployment options. Because it’s cloud-native, Avaya will be able to take a continuous integration/continuous delivery (CI/CD) approach with IX-CC, and customers should see rapid innovation. While voice-only to start, omnichannel will follow next year.
Avaya will initially host IX-CC in the Azure data centers in Abu Dhabi and Dubai, but the company is expecting to expand the platform to other parts of the globe over the next several months.
The use of Microsoft may surprise some, given Avaya’s cloud partnership with Google in North America. However, Azure is a more mature cloud infrastructure in the Middle East than Google Cloud Platform.
The notable thing about IX-CC is that it isn’t an upgrade of an older platform. At the event, I caught up with Ahmed Helmy, Avaya International’s VP and CTO, and he told me the plan is to use this new cloud-native solution as the foundation for Avaya’s CCaaS offering. The hosting on Azure enables Avaya to focus on driving differentiated features instead of running data centers.
Avaya Unveils IX OneSpace
While IX-CC stole the headlines at GITEX, another new service, IX Onespace, is equally notable.
Its uniqueness is that IX Onespace isn’t really an app. Rather, it’s a single pane of glass facilitating work. Instead of trying to re-invent the wheel and develop yet another application, Avaya uses of APIs and SDKs to pull information into IX Onespace from other business applications. It’s worth noting that IX Onespace incorporates any application for which the data is API-accessible; this includes Avaya apps but also apps such as Slack, Microsoft Teams, Cisco Webex Teams and email. This can be meaningful to workers who are already contending with far too many productivity apps today. 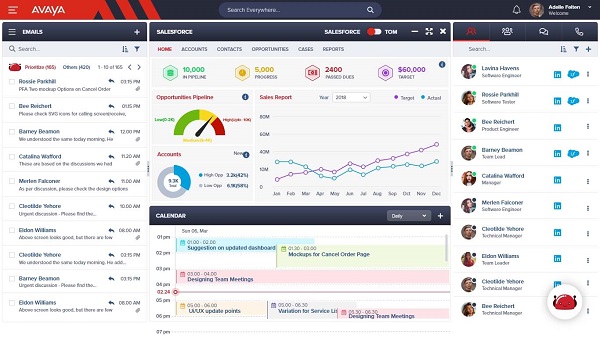 Between team collaboration apps like Microsoft Teams and Slack, conferencing apps like Cisco Webex; CRM, email, social media, and others, it’s a wonder that we get any work done. I recently saw a study from Workfront that found that workers spend only 40% of their time doing the job they’re hired to do. The rest of the time is spent managing work. I see this all the time… somebody sends me a Teams message, for example, and then immediately sends me an email to tell me to look for their message in Teams.
Avaya’s IX Onespace puts all of that information into a single, customizable location so workers can see what they want, in the format they want. Currently in beta, IX Onespace is available for trials. The obvious use case is for knowledge workers, but contact center agents could also find value in it to streamline processes.
Avaya’s Regional Strength
While at GITEX, I had a chance to talk to many Avaya customers and technology partners, all of whom have expressed confidence in the company. One South African business process outsourcer (BPO), for example, told me that it had had a few concerns about Avaya until it found out that all of the largest banks in the country were sticking with the company. If the banks were comfortable with Avaya, then this BPO said it felt no reason to feel otherwise.
As an analyst, I’ve had the opportunity to attend a number of Avaya’s international events, and the quality of customers and rapid innovation coming out the International group is a direct reflection of the strong leadership under International head Nidal Abou-Ltaif. His tightly knit team has been very stable, and that shows in how highly the customers speak of their relationship with Avaya. Avaya’s quality presence at GITEX 2019 steams from Nidal’s leadership.
Kudos to Avaya CEO Jim Chirico for putting a structure in place where innovation can be driven out of the regions instead of being centralized. This lets the company move faster and drive new initiatives where it makes sense. The CCaaS solution on Azure is a great example.
For a company that’s had its ups and downs over the past several years, the GITEX 2019 presence was the best I’ve seen from Avaya in some time. Hopefully, we’ll see some of the lessons learned here reflected early next year at Avaya Engage in North America.