Newly installed CEO, Patrick Dennis, is priming the Via platform for greater presence in the enterprise.

On the morning of Feb. 4, reading industry news, I learned that private equity firm Vector Capital had closed its acquisition of Aspect Software. As previously reported on No Jitter, when announcing the deal Vector agreed to invest more than $100 million in Aspect’s business. To be honest, I didn’t even click the link. In my mind it was merely a follow-up item. But now I know that had I looked further, I would have found that Vector also announced a new CEO and CFO for the business.

The day after the press release dropped, a little bird told me that Aspect leadership had radically changed overnight. Heading to the company’s website, I found the change had happened so quickly that while the Leadership Team page included photos, titles, and pithy quotes, it showed no bios of the new executives. Another 24 hours later, Aspect had added a paragraph on each executive, including Patrick Dennis, new president and CEO. In addition to the background noted in the graphic below, Dennis most recently had been an operating executive of Vector. 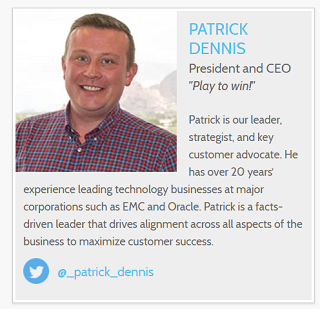 Having followed Aspect, its antecedent, and acquired companies (Aspect Communications, Concerto, Davox, Rockwell, TCS, and Voxeo, to name a few) since 1990, I suspected that I might have more questions than Dennis had answers this early in his tenure. But he bravely got on the phone with me when he was just two days on the job, and candidly discussed the plans he and his new team have for Aspect.

What’s ahead for Aspect from a product perspective? Aspect Via is the next-gen contact center-as-a-service (CCaaS) solution the company has been building for about four years, generally available since 2017. But it’s fair to say that given the firm’s financial issues, Via has struggled from under-investment. Dennis clearly sees Via as the future of the business. “The Via program is a great program,” he told me. What he plans to do is bring a renewed focus on enterprise customers and their needs to Via.

Targeting the enterprise is certainly not a unique approach in the CCaaS market, with companies from Five9 and inContact to Talkdesk and Serenova chasing the same customers. What’s different for Aspect, like Avaya, is that it has a significant number of enterprise customers on premises-based solutions. In the customer research Aspect conducted during its acquisition process, it found the majority of Aspect’s enterprise customers don’t have plans to move to public cloud anytime soon, Aspect CMO Michael Harris told me. “Our strategy is to focus Via on those clusters of customers that need a more manageable migration from their existing deployment to the cloud,” he said.

Dennis also spoke to me about the notion of clusters of customers. The Via strategy to date has been to build a full CCaaS and workforce optimization (WFO) portfolio, targeting increasingly large customers. Dennis described his planned approach to product development, which I found unique. He has defined clusters of customers, based on specific needs, and Aspect will develop solutions for those clusters, one at a time. Aspect is building Via as a Swiss Army knife, Dennis said. His focus will be on building a series of tools designed to address individual problems -- e.g., a knife, then a screwdriver, and so on.

What about rumors around the extent of layoffs that took place concomitant with Vectors takeover? I asked him this question next, noting that the estimate I heard ran the gamut from 150 to 800 employees let go. After laughing out loud, Dennis explained that with about 1,500 employees, the higher end of the range -- above 50% -- was absurd. The real number is closer to approximately 10% of the workforce.

Still, around 100 people is a lot. Dennis described the layoffs as coming from “G&A and sales and marketing,” the former being a financial industry term for general and administrative staff.

The marketing cuts didn’t surprise me as I knew that several of my marketing contacts -- at director and above levels -- had been let go. However, I was a little surprised to hear that salespeople had also been part of the layoff -- typically companies keep their salespeople during even the most draconian of executive transitions. But, Dennis said, “if we're going to focus on enterprise customers and enterprise customer needs, we didn't necessarily need as much of a salesforce in other segments.” Dennis went on to say that Aspect made no reductions in the service and support organization.

Dennis brings a new vibe to the CEO role at Aspect. Although installed as a result of his Vector ties, he has several product management positions on his resume. Since Jim Foy took the reins of Aspect predecessor company Davox in 2001, the CEO position has primarily been held by a series of men focused less on products and customers than on financial management and mergers and acquisitions. Yet Aspect has a loyal base of and longstanding relationships with brand-name enterprise customers, including Southwest Airlines and many of the world’s major banks. Again, like Avaya customers, they often don’t want to move to another system.

Dennis plans to build reasons for them to stay.