Catching a Glimpse of New Avaya

Through customer demos and a first-time appearance of new CEO, Avaya gave a peek at its future self at last week's GITEX conference in Dubai.

I got a glimpse of the new, emerging Avaya while attending GITEX 2017 earlier this month. Formally called the Gulf Information Technology Exhibition, GITEX is an impressive event that spans consumer and business technologies. The conference attracted 147,000 attendees to see 4,473 exhibitors over a million square feet at the Dubai World Trade Centre. 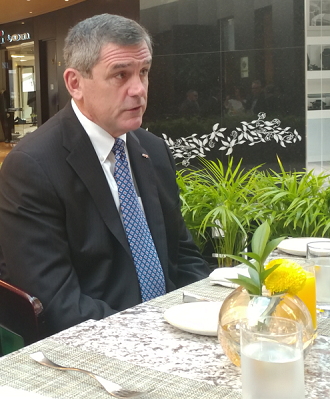 The expo hall contained an unusual mix of consumer and enterprise technologies that included drone taxis and robotic bartenders. Most of the major UC vendors were in attendance. Avaya, Cisco, NEC, and Huawei had neighboring, impressively large booths. However, GITEX was a particularly big event for Avaya for at least two reasons: hometown advantage and the presence of Jim Chirico, the company's new CEO.

Dubai is the home of Avaya International, which manages Avaya sales and services in Europe, Middle East and Africa, and Asia Pacific. Nidal Abou-Ltaif, president of Avaya International since 2015, is known for his close, interpersonal approach with customers and employees. He's been with the company since 2003.

Abou-Ltaif turned GITEX into a major customer event. The booth showcased 14 pods in which customers demonstrated their customized use of Avaya technologies. Avaya International also hosted a gala customer dinner with more than 400 guests.

The Avaya International staff members I met were very optimistic. Most of the Chapter 11 controversy, I learned, was contained to North America. The company has been on a roll with some major enterprise voice wins. Synergy Research recently reported Avaya experienced nearly a 6% year-over-year market share increase in the Middle East.

Most impressive about the customer successes highlighted in the booth were the integrations with third-party technologies such as artificial intelligence (AI), bot frameworks, and even blockchain. In one example, Avanza Solutions, demonstrated the use of blockchain (Hyperledger) and AI (Google) to measure, manage, and secure customer sentiment in real time, as it happens.

The profiled use cases included a diverse variety of applications, including paperless hospitals, drones, video analysis, and bots. Avaya also demonstrated its new hospitality portfolio, which includes SIP endpoints for hotel rooms and the video analytics technology used in the Sochi Olympics. About half of the use cases leveraged the new Vantage endpoint adapted to various workflows through apps and video.

GITEX also hosted the first public appearance of Chirico as Avaya CEO, a position he took on Oct. 1 (he'd earlier been planning on attending GITEX in his previous capacity as Avaya's global sales leader). Chirico met with customers and prospects, and presented on stage at the gala dinner. He, and many other Avaya leaders, were accessible for conversation and questions.

Chirico technically joined Avaya in 2008, but his familiarity with corporate leaders and owners date to previous positions he held at both of the company's private equity stakeholders, Silver Lake and TPG. While he's performed in several leadership roles at Avaya, he isn't well-known externally.

Avaya will be increasing its cloud investments while maintaining a partner-friendly market approach, Chirico stated. He also indicated Avaya will increase investments in research and development. That's at least partially due to the Chapter 11 debt restructuring that, he claimed, will free up $300 million in cash. The new capital structure gives Avaya more flexibility to invest in new technologies -- acquisitions are possible too.

Chirico said he intends to streamline the organization by reducing his direct reports. He envisions a stronger vertical focus and expansion of consultative services. He stopped short of specifics, possibly because they are still being formulated -- or more likely because disclosures are related to the continuing Chapter 11 process.

Over the next few weeks, Avaya is expected to exit Chapter 11, name a new board of directors, and become a publicly listed company. No formal organizational changes have yet been announced, although it appears Morag Lucey and Gary Barnett (CMO and SVP and GM of the Engagement Solutions business unit, respectively) have left the company. Laurent Philonenko's CTO role appears to have expanded, to include R&D.

In all, Avaya is well-poised for a strong 2018. The company has maintained profitability before and through its Chapter 11 filing, and will be exiting the process with new products, leadership, and technologies, as well as sales momentum in some regions.