As Google and Mozilla continue to release useful new features for their browsers, will enterprises move steadily away from Internet Explorer?

Admittedly, I am a bit of a young'un--I will embrace one of the buzzwords du jour and proudly proclaim myself a member of the Millennial generation. One of the trends that I see as being profoundly marked by age differences is browser choice. While I cannot say that I've performed an in-depth study on browser preferences according to generational status, I can tell you that I do not know a single person under the age of 30 who swears by Internet Explorer. In fact, IE has taken on somewhat of a reputation of being old, slow and cumbersome--as illustrated by one of the Internet's favorite geeky memes, "Overly Suave IT Guy": 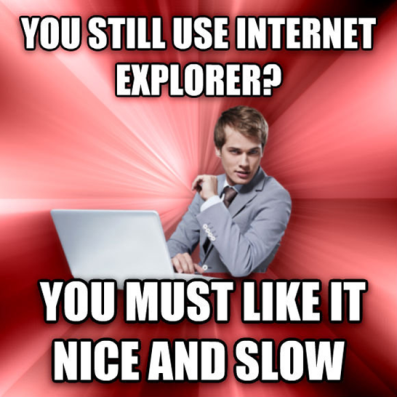 While IE may arguably be fairly standard in the enterprise, I predict this will change over time. Google and Mozilla continue to upgrade Chrome and Firefox; and debate over developments in government surveillance and regulation may affect the browser battles as well.

Google Updates Chrome, Drive
On the Google Chrome Blog that features the latest news from the development team, the company announced last Tuesday that its latest Chrome release includes a few new features.

One of the most exciting developments enables users to more easily identify the tab where sound is coming from--something that many users who commonly have 10 or 20 tabs open simultaneously will certainly appreciate.

In a day and age where multitasking has become an expectation, this sort of Web use is becoming more common. Case in point, I have 26 tabs open in two windows as I write this; and when one of those tabs started playing audio from a video advertisement in the page's sidebar, I only had to look for the audio indicator on the tab instead of individually clicking on each one and scrolling to locate the culprit so that it could be silenced. I've only been using the updated version a week, and I'm ready to declare allegiance to Google's innovation prowess. I didn't even fully realize how frustrating a problem this could be until Google rolled out a solution.

The other major update to Chrome is with its security features. Google has made its Safe Browsing's malware warning stronger, now automatically blocking malware files for you. Secure, private Web browsing has been a major issue ever since the NSA's PRISM program was exposed. In addition to Google's efforts, Mozilla is leveraging the NSA scandal to point out what it considers flaws in its competitors' products--more about that shortly.

Also worth noting in the world of Google developments, on the company's Official Enterprise Blog, Google made another announcement this past Tuesday--that it has added an activity stream to Drive so that users can more easily identify which documents or files have been altered.

Mozilla Fires Things Up
As most of the country and even the world are aware by now, when whistleblower Edward Snowden revealed the PRISM program to the public, we also discovered that many of the Internet giants were ordered to provide information to national intelligence authorities.

Last week, Mozilla CTO Brendan Eich and VP of Mobile and R&D Andreas Gal published a blog post warning Internet users of the dangers, as they see it, of trusting Web browsers that are not open-source (which includes some of its major competitors: Chrome, Safari and IE). The pair cautioned:

"As a result of laws in the US and elsewhere, prudent users must interact with Internet services knowing that despite how much any cloud-service company wants to protect privacy, at the end of the day most big companies must comply with the law. The government can legally access user data in ways that might violate the privacy expectations of law-abiding users. Worse, the government may force service operators to enable surveillance.... Worst of all, the government can do all of this without users ever finding out about it, due to gag orders."

Eich and Gal went on to explain the implications these government surveillance points can have for browsers, claiming this means that every major browser today is essentially within purview of government agencies. Their argument was that software and browser vendors should not be "blindly trusted," but that Mozilla's truly open source browser gives it an advantage.

Which Browser Do You Prefer?
Mozilla's claims of being able to provide a better assurance of privacy may be enough to sway some people toward adopting Firefox as their browser of choice. However, it is worth noting that both Chrome and Safari are mostly open source as well (deriving from the open-source Chromium and Iron browsers). So Mozilla's claims, besides being self-serving, may not be entirely accurate.

As an avid Chrome and Android user, it goes against my instincts to put aside any Google product for another vendor's. I certainly see the value in using different browsers, but I'm curious which browser preferences exist in this community and for what reasons. Looking at our internal data, it looks like the most popular browser for No Jitter site visitors is Google Chrome (various versions), followed by Microsoft, with Apple and Mozilla trailing behind. A comparatively tiny number of site visitors accessed No Jitter using BlackBerry, Nokia and Opera browsers.

Maybe you haven't even considered why you use one browser over another, or maybe you ran a thorough analysis to determine which browser best met your unique needs. In any case, I'd be interested in knowing what browser you use and why. Please feel free to tell us in the Comments to this post.