Have you ever been watching an online event or webcast remotely and wished you had the ability to interact with the panel speakers or other attendees, as if you were attending the event in person? Have you noticed the disparity between in-room and remote participants for streamed events? Seeing a need for this type of improvement for large-scale online events, Blue Jeans Network has come up with a new offering to address it.

Blue Jeans is well known in the industry for its video conferencing products and interoperability accomplishments. The new service, Blue Jeans Primetime, moves into the adjacent market for online events, enabling an elevated level of engagement between multiple presenters and thousands of in-person and remote viewers. 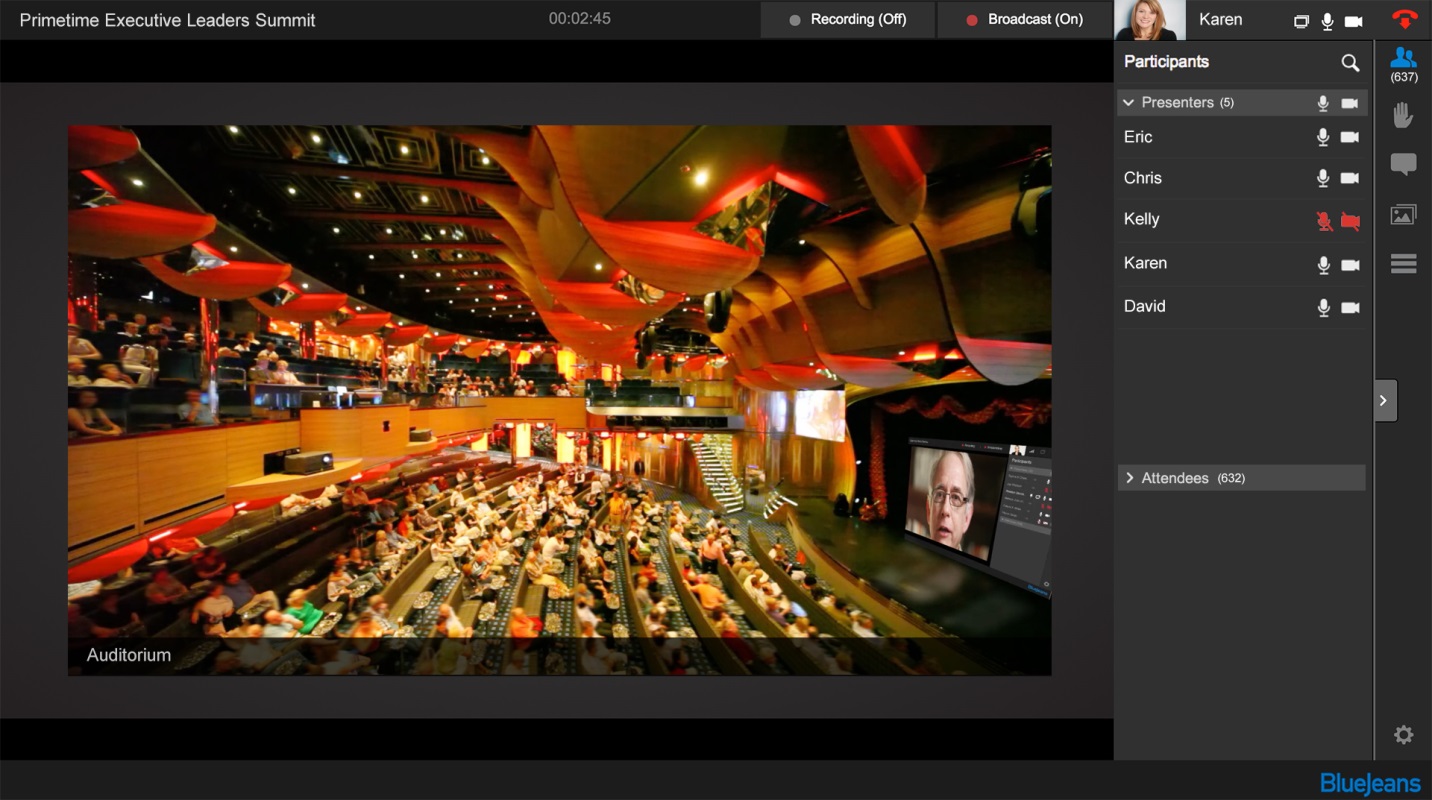 What's New
The new Primetime platform uses the existing Blue Jeans cloud-based video collaboration service, but new streaming capabilities have been added that allow Web events to be broadcasted to participants around the globe. While streaming content is not exactly new ground, the interaction that this tool enables is notable and addresses an industry need.

When an organization uses Primetime to stream a live event to remote attendees, moderators have the ability to switch the roles of remote participants between passive observers and active participants. This enables attendees to virtually raise their hand and engage with the speakers in real time.

As an example of how this might be applied to a virtual event, all attendees begin the event in a view-only mode. If a particular attendee has a question he would like to ask one of the presenters in real time, he would virtually raise his hand and the moderator would promote him to an active participant. He can then ask questions to presenters and even become a member of the panel himself. Right now, the tool allows for up to 100 people to be promoted to active participants in interactive mode at the same time, and supports thousands of remote participants.

While the role switching capabilities stuck out as the most groundbreaking to me, there are numerous other capabilities in this tool that enhance the online event experience, including the ability to join events from any device, the opportunity to eliminate the need for backend IT support for such an event (since the offering is cloud-based), and a range of controls that allow moderators to record meetings, pin presenters, see the quality of the connection for a particular attendee, etc.

The product is being rolled out now in limited availability, moving to general availability in the near future. While there was not a lot of specific information given on pricing, BJN executives did note that pricing could be expected to be similar to a web streaming event in which a 1,000-person, one-hour event would cost about $3,500.

Previewing Primetime with Red Hat
Primetime has been in trials since September, with a broad range of customers putting the tool to use for business purposes, including Wikia, TEDx, The Sundance Institute, and the Wharton School of Business.

I had the opportunity to speak with Chrissy Linzy, supervisor of voice and video collaboration at Red Hat, which took part in the trial. Red Hat has been a user of Blue Jeans Network cloud-based video collaboration services since early 2013, but first made use of Primetime back in October for a shared services "All-Hands" internal meeting with about 120 participants. Linzy said they got a lot of really great feedback from this first use, with many taking note of the feature that enables attendees to go into a one-to-one video chat with a presenter.

"The platform has really been a great thing for us, and we're really looking forward to using it more going into 2015," Linzy said. "Coming from the presenter side, [Primetime] does make it a lot easier on the presenter. I could see how many people were in the meeting, but I didn't have to deal with tabling their feedback or reviewing the chat screen because the moderators are doing that."

Linzy explained that her part of the "Women in Tech" presentation dealt with the idea of how people are always processing data in their lives, and more specifically, how the topic of data-driven feedback actually relates to Primetime's use case.

"If you think about a large meeting as constant sharing of data ... If I'm the CIO and I'm trying to present to all of IT, I need to know that they're receiving my message, right? And I can use the tool at that point to say, 'OK, everybody, raise your hand if you understand,' and I can get real-time feedback. I can have that real-time, one-on-one connection and make sure that the data I'm presenting is being received, by a person being promoted to ask me a question one-on-one. So I can look that person in the face and I can say, 'OK, Bob, let me help you understand that a little.' A lot of times webcasts or webinars are just one-way. So you have no idea how you're being received, if your jokes are landing, if your data is being consumed – and [Primetime] really gives you an interactive tool to really change the way people are communicating."