Created by combining assets acquired in the purchase of Agile Software in 2009 and Avaya Call Center Elite, Elite Multichannel was officially launched to Avaya contact center partners at the 2013 Customer Experience Summit held December 2-6, 2012 in Denver. The solution went into controlled introduction in October 2012 and moved to scheduled introduction in November. "Scheduled" means that the solution is not yet available globally; it can be ordered and installed in the US, Canada and CALA. It will be available globally by the end of 1Q13.

So what is Elite Multichannel and what does it mean for customers, partners and competitors? It is a Windows-based application that layers onto Avaya Aura Call Center Elite. Architecturally, it requires two additional servers (one XML, one IDS). Early 2013 plans include delivering Elite Multichannel fully virtualized using Vmware OVA files.

Customers
For the 40,000+ companies using Avaya Elite and CMS worldwide, it means that with a relatively simple and inexpensive upgrade, they can support email, web chat SMS, fax, and outbound dialing (preview and progressive) interactions. It's inexpensive because Avaya is pricing this solution to move; it is $525 list per agent seat for all of the mentioned channels. Reporting is through the existing CMS solution.

How is this different from what was already available? Until Elite Multichannel, the Elite customer wanting even just a few email or web chat agents either had to add Avaya Interaction Center or Avaya Aura Contact Center. Each also required an additional reporting system, either Operational Analyst or Avaya IQ, for unified reporting.

Partners
Many partners, especially those in the US, will be familiar with Elite Multichannel, as it is based on a mid-market solution they may have already been trained on and installed. Partners will like that they are better able to serve the Elite customer looking for some multichannel capability. They won't have to find a compatible partner solution or risk losing an existing customer to a competitor. Also, as shown in the graphic, Elite Multichannel works with most of the other existing components of the Avaya Contact Center portfolio. (The one exception is compatibility with Social Media Manager, which will be added in 1Q13.) 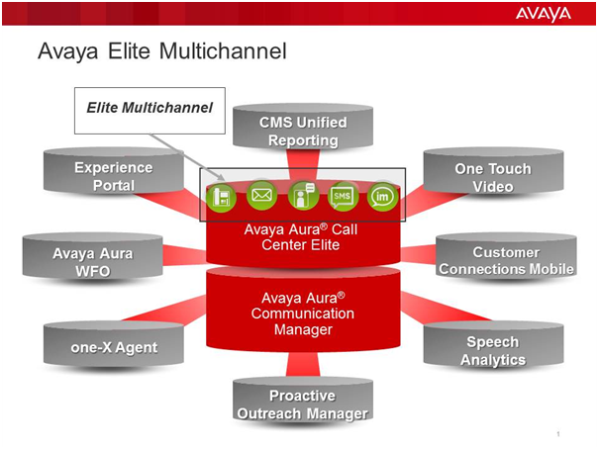 Competitors
For competitors, Multichannel Elite makes it more difficult to convince the Elite customer to rip and replace. When a customer's only alternative to add multichannel was an (often expensive) add-on solution with separate reporting, they were vulnerable to competitor messages. Avaya reports what they termed an "impressive funnel," with some 150 orders already in queue.

Elite Multichannel might be criticized as yet another multichannel solution from Avaya, but my initial response was, "If you could do this, why didn't you do it sooner?" I'm sure there are those at Avaya asking the same question. The good news for all stakeholders is that it is here now.

A Partner Perspective on Transitioning from Mitel to RingCentral
May 11, 2022
What to Expect at NICE’s Interactions Live 2022 Event
Dave Michels
May 19, 2022
Are On-Prem Phone Systems Actually Dead?
Melissa Swartz
May 18, 2022
From User Adoption to Hybrid Work Success
Eric Krapf
May 20, 2022
The Money Doesn’t Lie: Hybrid Work Boosts Cloud Communications Growth
Zeus Kerravala
May 13, 2022