From its annual meeting for Americas channel partners in Cancun, Avaya today announced a set of enterprise-class hybrid cloud services for customer and team engagement. It will host the software on VMware vCloud Air resources, deepening the data center relationship the two companies forged 2-plus years ago.

In August 2012, Avaya unveiled Collaboration Pod, a data center stack that includes all the necessary components for standing up virtualized Avaya applications for private and public cloud deployment. Since then, VMware has invested billions of dollars in data centers around the world, and Avaya will be able to take advantage of that build-out to host its new offering, Avaya Hybrid Engagement-as-a-Service. 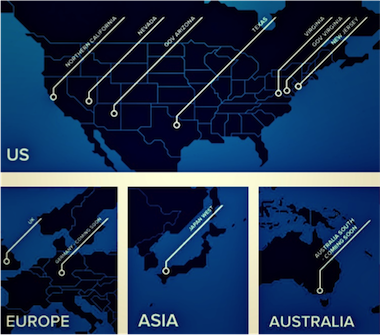 As seen in the graphic, VMware has nine vCloud Air data centers up and running globally, with an additional two in Australia and Germany "coming soon." To those unfamiliar with vCloud Air (as was I), this is clearly VMware's answer to cloud infrastructure offerings from Microsoft and Amazon. I found these competitive statements on the vCloud Air microsite to be quite illuminating: vCloud Air "delivers 2x the compute power of Microsoft Azure and 3x the storage performance of Amazon AWS" and "Why is vCloud Air 35% Cheaper Than Azure and 83% Cheaper Than AWS?" They clearly make the point.

With partners using the vCloud Air platform, Avaya said it will be able to deliver enterprise-class customer and team engagement solutions that bridge private and public cloud environments. I had the chance to talk with Joe Manuele, Avaya vice president, Global SI/SP, Alliances and Cloud at the event, and he highlighted some of the expected use cases for me:

Hybrid Engagement-as-a-Service will be available globally, Avaya said, but currently it is in controlled introduction with Carousel, a key U.S. channel partner with more than 6,000 customers.

Joe Lohmeier, who joined Avaya last July as vice president, U.S. Channels, is a propitious resource for the company as it seeks to navigate (exploit?) the waters of the VMware sales organization. Lohemier spent the last two years as vice president of inside sales at VMware, and should add some insider knowledge on how to kick-start this new phase of Avaya and VMware's partnership.

A year ago, Avaya's cloud strategy seemed to center on managed services contracts. The recent announcements with VMware and Google -- with more promised soon -- highlight not only enterprise customer appetite for cloud solutions but Avaya's attempt to quickly develop a portfolio of solutions that will keep Avaya customers "red."