the one-X Agent application will evolve to become Avaya's common client for all enterprise contact center applications, which will mean an easier migration path for customers.

In June 2006, Avaya launched the one-X brand with the goal of providing a consistent experience on various phone models, from the 9600 and Quick Edition series to Avaya soft phones and their Nokia Mobile Client. (For those keeping score, Avaya one-X Quick Edition, based on peer-to-peer SIP technology Avaya acquired from Nimcat in September 2005, was moved to end of life by Avaya on January 1, 2009.) 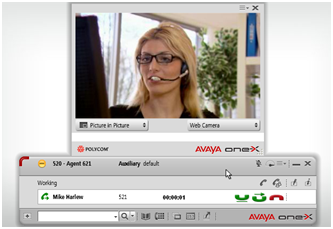 This week Avaya made good on its promise to bring the value proposition of one-X to the contact center with the release of one-X Agent.

Visually, one-X Agent is very similar to Avaya's UC client, one-X Communicator. That comes as no surprise since according to Gwynne Wade, Avaya's VP for Global Contact Center Solutions, "there's a fair bit of shared code" between the two solutions.

Part of that shared code is connectivity to Avaya's Presence Service within Avaya Aura Communication Manager, which will make it easy for agents to reach out to enterprise experts to assist with customer calls. By the end of 2009, one-X Agent will have the same aggregated presence capabilities available with one-X Communicator, including the ability for an agent to instant message an enterprise user on Microsoft Office Communicator. Another shared capability is point-to-point video, which allows companies to add support video kiosks with video agents, use video streaming to send content to callers or allow agents to consult, train, interact with coaches.

The Avaya one-X Agent application is supported on any host operating system, whether the host is "hard" or "virtual," e.g., Citrix, VMWare. one-X Agent is being offered in two license types, Base and Advanced, and the Advanced license is required for virtualization as well as video and hot desking.

Perhaps the best news is that Avaya has announced that the one-X Agent application will evolve to become Avaya's common client for all enterprise contact center applications. Today, companies that use Avaya's voice call center solution, Call Center 5.2, that want to add multi-channel interactions must move agents to a different application, Avaya Agent. Fewer applications will mean an easier migration path for customers.