Taking a page from the open-source playbook, Avaya today launched an app store for business communications -- the realization of a vision shared with No Jitter a year ago and the next move in the company's promotion of its open development platform.

It's a Snap
The Avaya Snapp Store, named for the applications -- "Snap-ins," in the company's lingo -- and created on the company's open development platform by Avaya or third parties, is meant to help companies quickly and easily extend functionality within a call or reach out to external applications, Gary Barnett, SVP and GM of Avaya Engagement Solutions, told me last week in a pre-Enterprise Connect keynote interview. Some Snap-ins are proprietary, and as such, obviously not available in the Snapp Store. But others are reusable, and available for download from this new app marketplace.

Becoming the Apple iTunes of the communications industry has been on Avaya's mind for some time. I first heard of the notion at an Avaya briefing in late 2014, and a couple months later got a bit more insight from Val Matula, the company's senior director, CTO, and GM of emerging products & technology. As he shared in the No Jitter post, "Snapping Context into the Contact Center," Matula liked the idea of creating a marketplace that would provide a way to deliver Snap-ins created for anybody's use and to accept payment for them.

That vision manifests itself with the Snapp Store, which opens today with about 15 Avaya-developed Snap-ins as well as Snap-ins from five partners, Barnett said.

You can find demonstrations of initial Snap-ins at Avaya's Enterprise Connect booth, 1701. Examples of Snap-ins from third parties are an IVR "place-holder" Snap-in that sends a contextual SMS link for users waiting in Web self-service from eGain (which Barnett said would be demoing this Snap-in as part of his Wednesday keynote address), a contact center-related SMS messaging gateway Snap-in from Webtext, a mobile-collaboration continuity Snap-in from Moxtra, a voice authentication Snap-in from Verbio, and a "personal gatekeeper" Snap-in from Approved Contact. 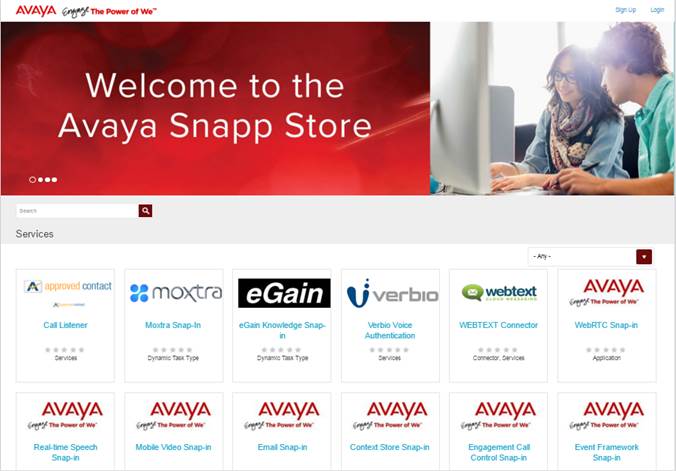 Developers wanting to offer Snap-ins via the Snapp Store go through a vetting and validation process to ensure the availability of solid and secure code, Laura Bassett, director of marketing for customer and team engagement solutions at Avaya, told me in a separate pre-show interview. Downloads are available via credit-card payment, and users will be able to sign up for monthly and perpetual subscriptions, she added.

Such a Breeze
The Snapp Store announcement comes in conjunction with the next iteration and rebranding of the Avaya development platform for Snap-ins. Avaya has done away with the rather clunky "Avaya Engagement Development Platform" name -- a mouthful that even the company insiders I've talked to have at times struggled to get out -- in favor of the, well, snappier, Avaya Breeze.

Avaya Breeze and Snapp Store speak to Avaya's overarching strategy of making it easy for companies to improve the customer experience -- the "new battleground" for the Digital Age, Bassett said. Avaya Breeze enables the rapid development of apps that will meet all customer touch points, and Snapp Store provides immediate access to capabilities that in a legacy environment might have taken months to custom create.

Last but not least, Bassett added, is Avaya Secure Delivery, for companies wanting to use hosted private cloud communications and needing to meet stringent security requirements.

If you're attending Enterprise Connect, catch more details on these announcements during Barnett's Wednesday morning keynote. He'll be taking the stage in Osceola C at 11:00 a.m. ET, and hinted at "thunderous" news to come. Hear it first live, or follow our Enterprise Connect coverage on No Jitter for details on this and other big moments from the week ahead.