As promised back in December 2014, Avaya has expanded its Google partnership in the contact center, today announcing a subscription service, Customer Engagement Solution OnAvaya Powered by Google Cloud Platform, at Enterprise Connect 2015.

The Google announcement took center stage during the Avaya keynote address at Enterprise Connect (read related article, "Avaya's Barnett: It's All About Engagement").

Avaya set the tone early with Gary Barnett, senior vice president and general manager for Engagement Solutions, entering the stage to the sound of a ticking clock -- an auditory metaphor that Avaya is working hard to quicken its pace. The addition of Google exec Murali Sitaram, managing director, Partner Strategy & Global Alliances, Google for Work, and Google premier customer Tony Bianco, president of Onix Networking's Cloud Computing Division, along with a demo of the WebRTC desktop, made this the liveliest Avaya keynotes in recent memory.

This latest phase in Avaya's relationship with Google is aimed at the midmarket, allowing midsized businesses to purchase virtualized instances of Avaya's IP Office Contact Center as a subscription service through Google Cloud. In contrast, the December announcement was targeted at existing and potential users of Avaya Communications Manager and its Elite Call Center capability.

They will need no other applications or servers, as supporting software and servers is hosted in the Google cloud. An authorized Avaya or Google partner will need to set up the service, which is expected to be available April 17. 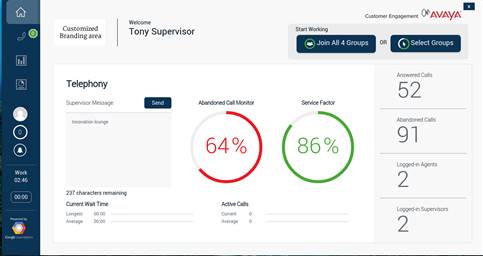 Intrigued by the term "OnAvaya," I asked Avaya's newly promoted Joe Manuele, now senior vice president and general manager, Global Cloud Services, its provenance. He reminded me that Avaya started using the term when it announced the expanded relationship with HP in December, as in Unified Communications as a Service OnAvaya and Customer Engagement as a Service OnAvaya.

Manuele credited Avaya CMO Andy Cunningham with coining the term, similar to but also different than similar branding tags, such as "Intel Inside." Different because it is meant to be evocative of social media parlance, such as "I'm on Facebook" or "I'm on Twitter." Cunningham, in her continuing quest to make Avaya cool, wants companies to similarly say OnAvaya.

Interesting is the notion of Google partners selling contact center solutions. Manuele reports that there are 14,000 such partners that "like the value proposition of selling contact center as a service." Compared to the rack rate of $5 per month for Google Apps, the proposed list price of $140 per month for Customer Engagement OnAvaya certainly seems worth the sales training effort.

It was interesting to see Vegas.com listed in the press release as one of the early customers of the new Avaya/Google contact center offer. Vegas.com has not only been an Interactive Intelligence customer since 2006, the company has been a strong reference as well. There is a Vegas.com case study on Interactive Intelligence's website and executives of the firm have given presentations at the company's user events. When queried, Avaya confirmed that the Vegas.com deployment of Customer Engagement OnAvaya is a pilot.

My title is a nod to one of Manuele's parting comments. This is the second of what he says are five major initiatives that Avaya and Google are working on together. The first two were contact center-centric. I have to imagine the other three will have a broader collaboration scope. Once again, stay tuned.