With an aim of helping companies boost customer and team engagement, Avaya creates enhanced solutions portfolios that feature a variety of new capabilities.

In a few short weeks, we'll be rolling in the new year... and, the way Avaya tells it, a new age as well -- the era of engagement.

In an analyst briefing earlier today in Santa Clara, Calif., Avaya CEO Kevin Kennedy laid out the company's vision for the era of engagement and its role in enabling enterprise engagement. "Engagement is a difference," he said. Engagement is about bringing the people in the enterprise to the consumer and the context to the circumstance while delivering sentiment and engendering advocacy, he added.

Andy Cunningham, CMO, continued. Frankly, Avaya understands that companies can make more money and be more productive if they have customer and employee engagement. But this isn't something Avaya cooked up in its marketing labs, but rather in listening to customers, she said.

Customer engagement of the future, for example, will include a mobility-enabled contact center, said Cunningham, announcing that Avaya has teamed with Google on engineering that future. Avaya's contact center software, or should I say customer engagement software, will run on Chromebook (for more details, read Sheila McGee-Smith's post, Avaya & Google Collaborate on Contact Center Solutions).

This is a story of a legacy premises-based enterprise communications provider repositioning itself for the social, mobile, software-driven and cloud-first (if at all possible) inclinations of today. In delivering its story, Avaya has reorganized its solutions into key portfolios that are additionally supported by a raft of new products aimed at improved engagement.

It's a familiar story of late, if not by these exact terms then in the subtext among companies providing unified communications and collaboration (UC&C) options. Companies are vying for a way to capture enterprise mindshare with a singular communications and collaboration experience for employees, their internal and external business colleagues and customers, as appropriate. Since October, we've heard the visions and got a glimpse of the products legacy providers are putting forth for the next generation of UC&C: Cisco Project Squared, IBM Verse, Microsoft Skype for Business, Unify Circuit.

For Avaya, engagement "isn't just about enabling people to talk, share and see either other individually or in groups," Troy Trenchard, vice president and general manager of unified communications applications at Avaya, told No Jitter in an interview. Rather, he said, "what really matters now is how you build these strong relationships and commitment both within organizations and with customers."

Citing research from the University of Bath School of Management and elsewhere, Trenchard rattled off a list of statistics showing the benefits of having an engaged workforce and engaged customers. For example, the research shows that engaged customers are up to three times more likely to be repeat buyers and provide positive word-of-mouth referrals, "which is an increasingly significant factor in how new customers make purchase decisions," he said.

And, internally, research shows that highly engaged teams are often twice as productive as teams that aren't as engaged, members of highly engaged teams largely consider themselves more creative because of the engagement and interactions within the groups, and most highly engaged employees -- up to 87% -- say they're happy with their jobs and not interested in pursuing other employment opportunities. As such, Avaya now divides its UC&C products into two portfolios: Avaya Customer Engagement Solutions and Avaya Team Engagement Solutions.

Customer Engagement
The Avaya Customer Engagement Solutions portfolio comprises the products that help build the relationship between an organization and its customers. "The question we've asked is about how we drive that relationship over a long time to increase customer lifetime value, both in the value an organization has to customers in solving problems and helping them achieve their objectives and in the value to the organization of customers and their ongoing purchases," Trenchard said.

Avaya Snap-Ins for Engagement Environment: As SIP evangelist and No Jitter blogger Andrew Prokop describes in today's post, "Introducing the Avaya Real-Time Speech Snap-in," a Snap-in is an application that runs within the Avaya Engagement Environment (formerly called the Avaya Collaboration Environment). These Snap-ins can insert themselves into the middle of a call and do everything from play prompts to reach out to external applications." Besides the Real-Time Speech Snap-in that Prokop writes about, the Snap-in model also delivers WebRTC and mobility capabilities, as well as work assignments and context stores for contact center operations, Trenchard said.

Avaya Social Responder: This is a cloud-based offering for social media monitoring and response in the contact center. Per policy, Trenchard described, enterprises will be able to route information gathered from social sites into the contact center for real-time response and engagement. For example, tweets from known customers might be fast-tracked for response or those of a threatening nature might be diverted to the security team, he noted.

Customer Engagement Transformation Consulting Service: Using its own experience as a guide, Avaya is helping guide enterprises on how to "evolve their call centers into customer engagement centers," Trenchard said. Today more than 80% of customer contacts come in to Avaya over the Web, with the majority of those customers solving the problems themselves in that way via resources the company continuously updates based on ongoing learning. "But they always have the opportunity to escalate the contact and talk to a live person, either through text, audio or video," he added.

Avaya Engagement Development Platform: With this platform, which is part of the Avaya Engagement Environment, business analysts, enterprise architects and ISVs can customize and build applications and workflows via easy-to-use development tools and a reusable snap-in architecture, as discussed above.

Avaya Communicator: "With Avaya Communicator," Trenchard said, "we've completely evolved our user experience for communications and collaboration, presence, text, messaging, audio, video, content sharing, and conferencing -- things traditionally called UC -- to have a single, consistent, intuitive, rich experience for users across a range of devices." Avaya Communicator includes a new Avaya Multimedia Messaging capability, which lets users integrate audio, video and content recording for enhanced live and playback experiences. "This is about providing persistent, long-lived, topic-oriented interactions with one or more people -- and not simply a stream of everything we've texted each other over the last three years," he said. And it includes the latest version of Avaya Aura Conferencing 8.0. 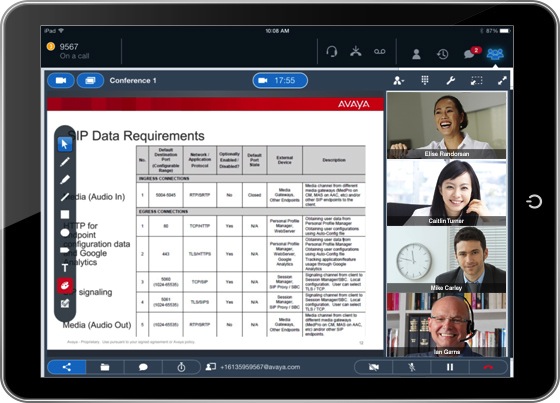 Is Avaya's story of enhanced communications and collaboration engaging enough? Let's discuss below!