The biggest factor is likely to be last year's acquisition of Voxeo, which has strengthened Aspect in the cloud.

The biggest news from Aspect Software in 2013 was its acquisition of Voxeo (winner of Enterprise Connect 2013's Best of Show award) in July. Six months later, at this week's Aspect Analyst Summit in Scottsdale, AZ, it was clear that the impact of the acquisition has positively permeated throughout the organization.

First is the company's ability to tell a more compelling cloud story. With Voxeo data centers located worldwide, Aspect this month will deliver a multi-tenant cloud offering--Zipwire--initially in North America and later in the year in EMEA and APAC. Zipwire is targeted at the under-500 agent seat market segment.

Beyond the mid-market, Voxeo's cloud expertise was no doubt a major contributing factor in the company's multi-million-dollar deal with Southwest Airlines to transition the airline's aging Aspect CPE infrastructure to a cloud-based environment. Having a major logo not only re-commit to Aspect but do so with a cloud offer is a great proof point for Aspect sales people to take into other customers on legacy platforms.

A second major impact of the Voxeo purchase relates to talent acquisition, specifically John Amein, now VP Product Management for the entire Aspect portfolio. Beyond efforts to bring the technologies of both companies together--e.g., plans to use the Voxeo voice platform in both Aspect's Unified IP platform and Zipwire--Amein is bringing Voxeo philosophy to Aspect.

In a December 2013 blog, Amein announced the application of Voxeo's "unlocked" approach to Aspect's product strategy. At Voxeo, the development process involved a commitment to ensuring products were "unlocked" at every layer--enabling customers to integrate with other applications and reporting tools, even if those products were from competitors. The "unlocked" approach now extends to Aspect, ensuring all customers will enjoy the same freedom going forward as they did with Voxeo.

The last impact is perhaps less directly related to the Voxeo acquisition and more to the shift to a cloud OPEX revenue model. It is no secret that CPE maintenance revenues have been an important part of Aspect's revenue stream for the past few years. As customers on older platforms migrate to the newer--and less expensive--Unified IP solution, maintenance revenues inevitably decline. As new and legacy customers move to the cloud, the opportunity for implementation services revenues likewise will decline.

To ensure that overall services revenues continue to grow, and to support the evolving solution-based needs of customers, Aspect in September brought onboard a first-class leader as SVP Aspect Worldwide Professional Services. Ken Ewell brings not only a firm grounding in the telecommunications space from an early career stint with the Bell System, he went on to spend several years at IBM Global Services, Deloitte, and Gemini before founding a management consulting firm.

One of Ewell's first initiatives was to merge the 150+ people from the 2010 acquisition of Quilogy with the rest of the Aspect professional services team. For years, those people had been part of a group called Microsoft Professional Services, working on not only Lync contact center deals, but other types of SharePoint and Dynamics projects. Now, Ewell envisions the merged team working on customer projects that fall into one of six defined practices, outlined in the graphic below. Notice that the practice areas focus on customer issues, not Aspect solutions. 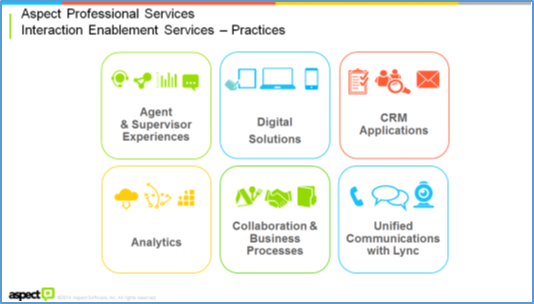 As is true for Genesys as it morphs into a more cloud-centric solution company, go-to-market and channel strategy will be keys to Aspect success in 2014. But there is no doubt that the product portfolio and executive team that take on these challenges are better equipped than any that Aspect has seen in many years.