A reborn company is poised to help customers better track consumer interactions and optimize the engagement.

Engagement certainly appears to be a popular term of art in 2015 -- last week, for instance, I wrote about Avaya's team and customer engagement strategy, and now I'm taking a look at what Aspect Software has in mind when it says "engagement." 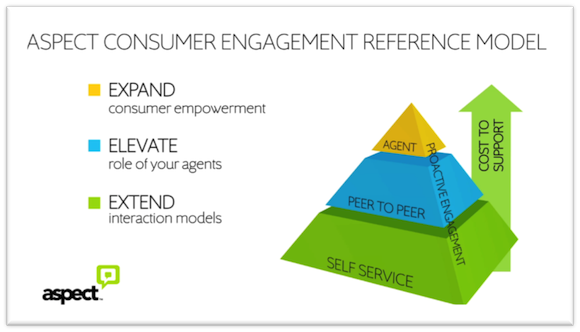 What strikes me about the model is the recognition that self-service has become the foundation for how consumers interact with companies. Marketplace trends show that consumers would rather do a Google or YouTube search, go to a company's website and read through FAQs, or use a mobile application to get a question answered than speak to a live agent. Nevertheless, bolstering consumer empowerment is seldom the focus of new offerings. Too often, for vendors and their customers alike, self-service brings to mind the dreaded IVR.

The Aspect model infers that many consumers are starting with self-service, finding resolution, and ending their journey there. Others are reaching out to peers and likewise finding an answer and ending their quest from information. A decreasing proportion of consumers make it to a live agent -- and most who do will have taken several steps before actually reaching for a phone or clicking on a chat window.

The model implies that a customer takes a journey to complete a specific task. Sometimes the customer completes the task easily, with one self-service activity; sometimes the journey goes on for days, or even longer. But when the customer gets to the point of making contact with the company, the expectation is that the agent knows what steps he or she already has taken along the way and is able to continue the process from that point. The customer, in other words, does not want to have to start all over from the beginning.

While Aspect does not say so explicitly, mapping out the customer journey is an inherent part of its approach. Beyond the Consumer Engagement Reference Model, which some might call "marketecture," the company has created solutions aimed at enabling a better approach for tracking connected interactions. With the acknowledgement that companies need an easily accessible data store that can memorize past transactions on any channel, for example, Aspect in coming weeks will be announcing its Continuity Server. With the Continuity Server, Web, mobile app, and IVR system developers will be able to store so-called context cookies, which are small traces of information about a customer's journey.

Three or four years ago, Aspect struggled to keep existing customers, let alone acquire new ones. A new management team set the Aspect ship right, and made a series of strategically sound acquisitions and partnerships that have helped the company regain customer and market respect. Aspect is now positioned to be an innovative leader once again.

Ken Ewell, the SVP for professional services who I introduced to No Jitter readers a year ago, has proven critical to the company's development. He joined Aspect in September 2013 charged with instilling management consulting-level values in the organization. He's done a great job of executing on that mission in 2014, enabling a key competency required to help customers make the kind of transformations required to adopt a new way of doing business.

Gagnon, the "man behind the model," also has been instrumental in Aspect's rebirth. Gagnon came to Aspect in May 2014 on the heels of having completed a major business transformation for online education firm Penn Foster, at which he was president and COO. Gagnon has incorporated his learning from that experience in the Aspect Consumer Engagement Reference Model. He is at heart a change agent (his personal blog, The High Performance Life, gives you a glimpse of this). He brought fresh perspective and vitality to the executive team at just the right time, and I'm looking forward to hearing his perspective from the tippy top of the model during an Enterprise Connect Orlando session, "Improving the Contact Center Agent Experience," on Wed., March 18.

Now that Aspect has perfected the basics and made and incorporated spot-on acquisitions, it's time for it to soar on the wings of consumer engagement.

Sheila has coordinated and will be presenting at sessions in the Customer Experience/Contact Center track at Enterprise Connect Orlando, taking place March 16-19. Register with code NJSPEAKER to save $300 on conference passes.