The programmable Apple SIM, today for the new iPad Air 2, gives users the freedom to move from one wireless carrier to another -- in theory, at least.

Love Apple or hate it, you can't deny the company has been an innovation machine within recent months -- the mobile and desktop operating system updates, the iPhone 6, a new line of iPads and Macs, and Apple Pay. And then there's the Apple SIM, a lesser-promoted but nonetheless really interesting feature that made its debut with the iPad Air 2.

Simply put, the Apple SIM is a programmable SIM card that allows the iPad to work with any wireless carrier. This could be a real game-changer.

Back in the old days of a few years ago, changing carriers meant changing hardware. You did have the option of using foreign SIM cards when traveling internationally, but that often required expertise that you, if you were an average iPad user, didn't possess. After all, the iPad is known for its ease of use, and users buy it for just that.

With the Apple SIM, you can select the carrier of your choice based on your needs. Should you decide to switch carriers, you can do so whenever you want, without having to change SIM cards.

What a novel concept. Users can buy a single device and use it with the network of their choice. Very quietly, Apple has taken a huge step to empower users with choice, and this in turn should lead to aggressive competition among carriers not just to bring in customers, but to keep them. 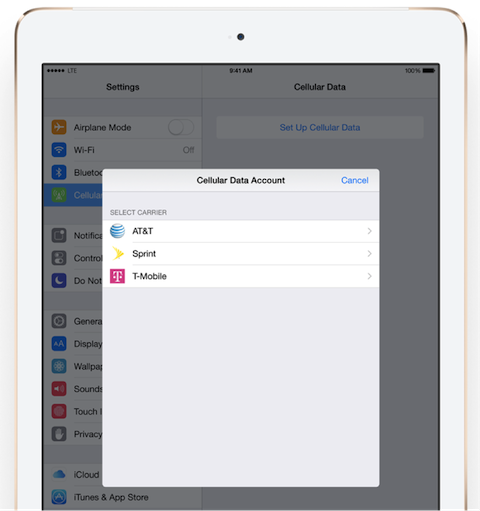 This is a huge win for consumers, who are no longer locked in to a single carrier. Imagine selecting an LTE service just like you do a Wi-Fi network. The key is that anyone (read non-technical folks) can now easily change providers as they wish, without having to change SIMs or visit a store.

As you might expect, giving flexibility and choice has not gone over well with all of the carriers. Of the four primary domestic carriers, only Sprint and T-Mobile support the Apple SIM. AT&T is playing along but with restrictions, and Verizon has refused to participate.

Confusion Reigns
The limited support is leading to massive confusion over carrier options on iPads depending on where you buy them. The best explanation I have seen so far is from T-Mobile CEO John Legere, who took to Twitter to explain things. In his 20-post Tweetstorm, at @johnlegere, he lays out the current environment mixed in with his usual jabs at the competition. Here's a summary of his comments:

• New iPads purchased from Apple do have Apple SIMs. You can select T-Mobile, Sprint, or AT&T. However, if you select AT&T, you can't change to another carrier without replacing the SIM card. And if you select one of the others, you can't select AT&T in the future.

• Apple is not selling separate Apple SIMs, but it might.

• You'll have issues switching to Sprint after using another carrier due to its authentication methods.

• New iPads purchased from Apple do have Apple SIMs. You can select T-Mobile, Sprint, or AT&T. However, if you select AT&T, you can't change to another carrier without replacing the SIM card. And if you select one of the others, you can't select AT&T in the future.

• Apple is not selling separate Apple SIMs, but it might.

• You'll have issues switching to Sprint after using another carrier due to its authentication methods.

Clearly the carriers are happy with all of this confusion. Each prefers that you to go one of its stores to buy your iPad complete with proprietary SIM. And stay with it forever.

In their defense, carrier-provided SIMs could potentially provide an additional layer of security over the Apple SIM. Remember the prevalence of landline slamming in the 1990s? Cellular slamming is only a hack away.

It'll be interesting to see how this all shakes out. It's possible that Apple, with its influence and loyal consumer base, can pressure the carriers enough to play along. But it's also possible that the confusion and lack of cooperation from AT&T and Verizon are enough to make the Apple SIM irrelevant.

On the iPad's Heels
And what about the iPhone? Right now, Apple is only using the Apple SIM with iPads but it would make sense that these would be showing up soon in an iPhone near you. With control and ownership of the SIM comes great power, and this could be a huge move for Apple. Right now the conversation is about which carriers chose to support the Apple SIM. But things could flip where Apple gets to choose which carriers it feels like supporting. Imagine if Apple started building a phone without removable SIM cards and required carriers to support a built-in Apple SIM.

In the meantime, Apple is playing it cool, OK with the idea that the Apple SIM is a much better fit for the iPad than the iPhone. This is likely because it knows users tend to pay full price for iPads from retailers while buying subsidized iPhones from carriers. Perhaps Apple is being realistic that the SIM is less compelling in the phone world. Or maybe it's being coy about its future plans. This tension with the carriers is only going to grow over time, after all.

Perhaps the greatest benefit of the Apple SIM involves international roaming. Right now, only one carrier outside of the U.S. is on board, and that's U.K.-based EE. But if Apple is able to expand support, international travelers would be able to subscribe to a local carrier's data plan for a week or month without having to change SIM cards. This would give the iPad a competitive advantage over other tablets.

As I look into the future, it's hard to imagine that we'll be using SIM cards much longer. It just seems like an antiquated carrier control mechanism being carried over from the 1990s. And while the carrier-centric paradigm has its limitations, are we better off with an Apple-centric world?

I hate to end on a question, but we will all have to wait and see what happens. In the meantime, the anti-carrier folks and the anti-Apple folks can fight it out.

"SCTC Perspectives" is written by members of the Society of Communications Technology Consultants (SCTC), an international organization of independent information and communication technology professionals serving clients in all business sectors and government worldwide.