America, We Have a Problem

Complaints about deteriorating copper infrastructure are falling on tin ears.

A client of mine was describing an experience that is becoming all too common these days. One of their locations was experiencing a complete outage of voice and data services. After the third occurrence of the problem, my client went outside and noticed that the telephone wire to the street was lying on the ground.

Apparently, landscapers had cut the wire while mowing the grass. When repair services came out to fix the problem, they spliced the wires back together. Fine--except they didn't bother to bury the cable, but instead left it on the ground to be damaged again.

Repeated calls to repair were fruitless. My client was only successful in getting the cable buried after enlisting support from the power company.

It would be easy to write this off as lazy workmanship, but it is a symptom of a much more dangerous reality: Carriers don't care about copper anymore. This is not a secret or a bold revelation. Heck, carriers themselves are even admitting it.

And after flipping through the 2013 annual report for AT&T, it is hard to blame them. Consider the following: 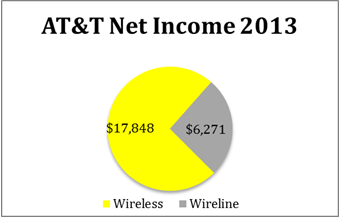 • Wireless revenues exceed wireline revenues
• Nearly 75% of net income comes from wireless--See Pac-Man chart
• Income is up on wireless, down on wireline year over year
• Overall income is increasing year over year
• Wireless profit margin is 25% vs. 10% for wireline

And while copper is becoming less profitable, it is also becoming more expensive to maintain and is degrading over time. All of this leads to a situation in which there are going to be more and more problems over time, with less investment to be made in a deteriorating, antiquated, and unprofitable infrastructure.

(Please understand I am not being critical of AT&T for making a profit--even a large profit. That is what they are in business to do.)

Much has been written here on No Jitter about the problems related the end of POTS as carriers move customers to VoIP. To make matters worse, where VoIP is running over copper, it stands to be even more problematic than we think today, given again the disincentive of the carriers in maintaining the copper infrastructure.

And while Verizon has made strides in rolling out fiber to the home, that is still a small percentage of the overall market. AT&T has chosen a copper strategy to deliver telephone, TV, and broadband to the home. Not only are they limited by bandwidth and distance, but they are running this over an aging infrastructure.

This has led to--and will exacerbate--the gap between the haves and the have nots. Where you can get fiber, you are golden. In rural areas, or in neighborhoods/business parks to which the carriers don't want to run fiber, you are out of luck.

Oh, and you are paying roughly the same for your dial up-like experience as folks with 1 Gbps speeds. We all know demand is going to continue to grow and we are already maxing out top speeds on DSL, so the impact of this reality is only going to get worse.

The first step to moving forward is admitting you have a problem. Check. Now what do we do about it? Here are 3 recommendations for addressing the copious crumbling copper concerns:

1) Move to fiber if you can--For large locations and corporate offices, it is imperative that you move to fiber if at all possible. The carriers are much more interested in maintaining their fiber network than they are the copper network. Cost can be an issue, but by leveraging new VoIP services, you can cut your costs while implementing more reliable infrastructure. Fiber also provides an easier upgrade path to increase bandwidth.

2) Move small locations to wireless--For small locations, it often makes sense to move all services, voice and data, to wireless. In 4G coverage areas, network speeds are more than enough to support a small office, in many cases much faster than DSL speeds. The carriers are now offering POTS replacement options over wireless, offering better reliability, flexibility, and lower costs.

3) Leverage cable-based services--Either as a primary or backup, cable based services provide an excellent option to gain physical diversity for network services. While cable and telephone wires are often on the same utility poles, it still offers redundancy at the physical cable and network levels. Given the growing frustration with traditional telephony carriers, the cable companies, even with their own baggage, are becoming more and more appealing. Not to mention their huge pricing advantage.

Obviously, there are a lot of variables that would direct a company to consider a mix of these strategies, in addition to possibilities such as satellite. A thorough analysis of needs and capabilities is needed to come up with the right mix.

One could hope that the federal government, through Congress and the FCC, would develop a strategic broadband initiative to bring some order to this chaos and to ensure that we don't get left behind as the world progresses ahead of us.

They have, but it is hard to get too excited.

Not to get overly political, but the FCC does not have a very good track record of effectively spending money. And their objectives are more centered around providing broadband for every American, undoubtedly based on bandwidth needs baselined in 2009. We should be building toward the needs of 2019 and beyond.

Susan Crawford, noted professor, author, and expert/critic of the communications industry, provides her own critique of the problem and offers some compelling solutions. In her must-see interview with Bill Moyers, in which she discusses the root of many of these problems, she advocates the concept of lending money to local utilities and co-ops to deploy fiber in areas where carriers are unwilling or unable.

I like this approach because it empowers local communities to take care of themselves, without depending on carriers, or even worse, subsidizing the carriers to provide sub-par service in the name of Universal Service.

This goes right along with the excellent No Jitter piece Martha Buyer wrote just a few weeks ago--"The Challenge of Providing Landline Service When Returns Diminish." Communities that are proactive in addressing broadband demands will position themselves for success in the future. And while I am not crazy about looking to the government for help, it is clear we can't depend completely on the free market to fix the problem.

I know some of you are saying, "Tom, we don't have a free market in the first place. " You are correct, but that is a story for another day.

We are in danger of having a large percentage of our country fall into a virtual wasteland of sorts, where government oversight and the marketplace alone won't be able to pull us out.