We have so much data available today and now we need help understanding what it means. 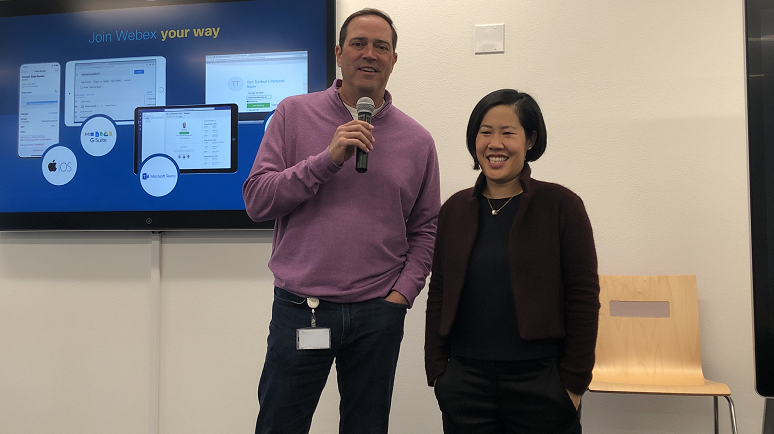 Last week, Cisco’s Collaboration Technology Group (CTG) held an analyst-only event in the John T. Chambers Executive Briefing Center in San Jose, Calif. The event was the coming out party, if you will, for Cisco’s SVP of CTG, Amy Chang, who most analysts had yet to meet (see related coverage, “What to Expect from Cisco Collaboration” and “Cisco’s Amy Chang on the Future of Collaboration”). I was fortunate enough to meet with her at Cisco’s Partner Summit in late 2018 and she told me she had a reason for not doing more analyst activity and that she just wasn’t ready to talk about stuff yet. But, she is now, and at this event she discussed where the group is and where it’s going.
Despite the recent changes in executive leadership, CTG has not only held strong but has accelerated growth. During the analyst event, Cisco announced its Q2 FY19 numbers and the company’s Applications group saw year-over-year growth of 24%, up from 18% and 10% one and two quarters ago respectively. The Applications group also includes Internet of Things (IoT) and the red-hot AppDynamics business, so not all the success can be attributed to Collaboration, but CTG is the largest component of Applications.
It’s hard to say how much of the current success is due to Chang and her new management team, but there has been a noticeable change. Cisco has blitzed the market with advertising and promotion over the past few months; changed the look, feel, colors, and icons of its brands; and the messaging has become more contemporary. Chang and her leadership team have brought a different attitude and, so far, the results have been positive.
Let’s Get Cognitive
One of the main themes of the event, as well as the broader collaboration industry, has been artificial intelligence (AI) and how it changes the way we work. Cisco has been talking about AI-driven solutions for some time and highlighted many at the event. For example, the Cisco in-room video devices, including the recently released Cisco Webex Room Kit Mini, have capabilities in the cameras like intelligent framing to ensure those speaking in the room are portrayed best on the screen. This obviates the need to manually crop or zoom, as it happens automatically. These devices also detect faces in the rooms to track how many people were in that room and for how long. This can be useful for IT and real estate teams who need usage data for efficient space planning. The devices also incorporate features such as noise detection and noise suppression for a better meeting experience. These are just a few of the AI-based technologies incorporated into Cisco products to remove much of the friction that plague meetings today.
So far, so good for Chang and company, but I think most of us analysts were there to hear about what’s next for Collaboration at Cisco. Hearing things were hunky-dory was interesting, but Cisco didn’t acquire Accompany and make its CEO the head of CTG for the here and now. Chang was hired to understand what the next big shift is in collaboration and have Cisco primed to lead the industry into that wave. That next big thing is something Cisco calls “cognitive collaboration.”
Much of the event was under NDA, so I can’t discuss specifics of what Cisco is doing but I can talk about the concept of what it is. From a 30,000-foot view, cognitive collaboration is the infusion of external data into our communications and collaboration tools. When some intelligence is applied to the data, it in turn adds context and intelligence to every interaction. In Cisco’s case, Accompany will obviously provide much of the data and become part of the Webex Graph, which is a data model, introduced last April, that encapsulates all the objects in a system -- people, meetings, devices, messages, and spaces (see “5 Collaboration Targets for Cisco”).
For those not familiar with Accompany, it’s an aggregation of all publicly available data on people, focused through a business lens. It’s important to note that Accompany only mines data from public sources of data and not password protected ones such as LinkedIn and Facebook, as some may view that as a breach of privacy. It can show a person’s LinkedIn link and there’s a feature to upload LinkedIn data, but it will not natively do that; rather, it’s left up to the individual.
When one signs in to Accompany and looks up a person, they are greeted with almost a personalized bio of the person including other connections that people have in common. For example, if I look up Cisco VP of marketing Aruna Ravichandran, I see that we have SDxCentral’s Jessica Hardcastle as a common connection. Scrolling down I see a number of other people that work at Cisco and other companies. The dashboard also shows articles that feature her, emails between us, meetings we have had in common, and other information. If this was a first meeting, a good ice breaker would be to bring up our shared connection, Jessica, or possibly discuss the upcoming DevOps event she is speaking at. 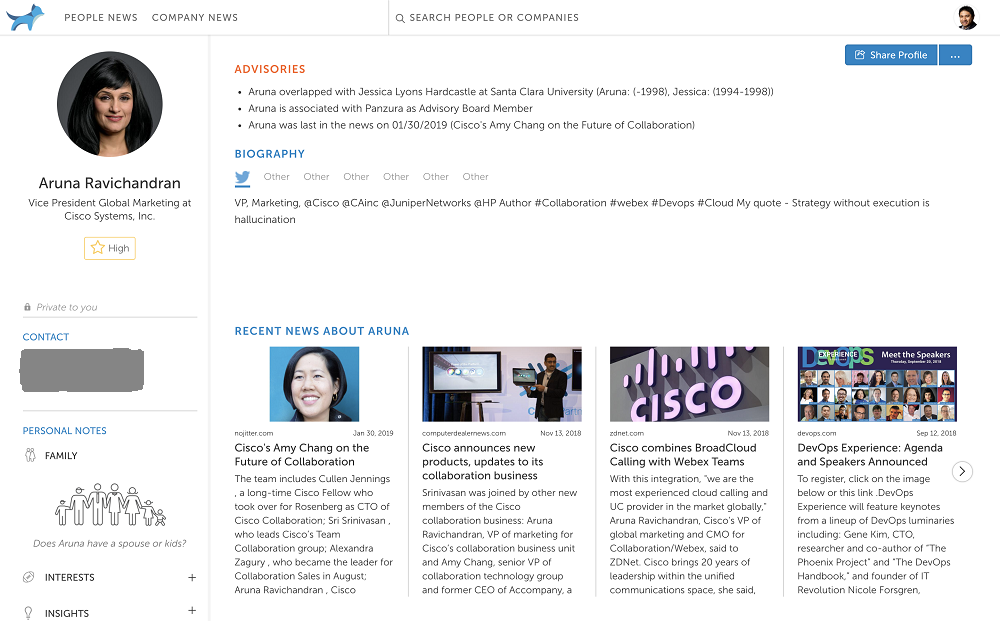 One of the bits of “magic” that Accompany is doing is understanding who is who. For a name like “Zeus Kerravala,” aggregating information is relatively simple. There simply aren’t that many Zeus Kerravalas out there. However, for a name like “Amy Chang,” there are likely thousands of people with that name, and the Accompany algorithms can go through them and determine the right Amy Chang.
Infusing Collaboration with Data
Imagine taking this data and infusing it into all forms of collaboration and think about how that could make us more efficient. If I were on a video call with Dave, I could see a short bio under his name helping me to be better prepared in my meeting with him. This type of contextual information should be considered as merely the starting point. With a little bit of AI, the data that I see infused into the collaboration tools should be different than what another person sees. The raw data is helpful but personalized information would be akin to having a dedicated virtual assistant constantly changing what you see depending on to whom you are talking.
Extrapolating the concept out further, the cognitive information can turn into a constant feed of information based on who you are working with, how you work, and what you are working on. Let’s take the video chat that my fellow industry watchers Kevin Kieller, Dave Michels, and I did on various considerations for Cisco Webex versus Microsoft Teams. Imagine this as a real-time collaborative session with a customer looking to make a decision on Cisco versus Microsoft. If Kevin were talking about a case study with a company he worked with, that data could be pushed to the customer as he is saying it (assuming it was written up). If I then mentioned a webinar that explains why Cisco’s end-to-end security approach is better, a link could be pushed with the exact spot in the webinar queued up. The key is that cognitive collaboration provides a rolling set of real-time data to help us collaborate better and make better decisions.
An interesting aspect of the long-term vision of cognitive collaboration to think about is where data will come from in the future. Right now, Cisco is leveraging Accompany, Microsoft will mine LinkedIn for data, etc. But it’s my belief that in the not too distant future, we will live in a world where everything is listening and everything is watching and all that data is being captured and used. In theory, I could have Dave Michels tell me he’s interested in talking to a customer using the new Webex Room Kit. Then, one day, months in the future, I run into a Cisco customer using the Room Kit and get a reminder that Dave Michels is still interested in talking to them and I can make an introduction.
The concept of cognitive collaboration is similar to the vision of contextual communications that I presented on last year at Enterprise Connect during my Communications and Collaboration 2021 session. This year in my Communications and Collaboration 2022 session on emerging technologies, I’ll expand on this topic and drill down further. If you’re interested specifically as to what Cisco is doing, all that I’ve hinted at in this article will be part of Amy Chang’s keynote at Enterprise Connect, taking place Wednesday, March 20 at 10:00 a.m.
At a high level, the concept of cognitive collaboration is easy to understand. The use cases require shifting the focus of collaboration from being a set of applications that constantly require the user to pull data to one where information is pushed in a way that’s quickly digestible. This may not be immediately obvious but once a few use cases are developed, innovation will ramp up. In my opinion, cognitive collaboration, or whatever name you want to ascribe it, will be the next big battleground for UC. We have so much data available today and now we need help understanding what it means.
Enterprise Connect 2019 is coming to Orlando, Fla., March 18 to 21 at the Gaylord Palms Hotel & Convention Center. If you don't yet have your pass, register now to take advantage of our Early Bird Rate -- ending Feb. 22. As a No Jitter reader, you can save an extra $200 your pass by entering the code NJPOSTS at checkout. See you there!