Bringing employee BYODs into compliance, and using the WLAN infrastructure to capture data on customer behavior within stores.

Communications as a core funtion within the enterprise is fragmenting. The monolithic PBX is being broken up into discrete applications, many of which are now available on virtual servers. And communications isn't even necessarily PBX-centric any more; the PBX is one center of gravity, but others are rising, most notably the mobile capacity, which the enterprise usually supports independently of the whole PBX platform.

As more diverse media and network types support communications, it's only natural that there will also be greater fragmentation along the axis of industry verticals. Wireless is pervasive among most knowledge workers, but it's also of particular importance within certain industries--health care, for example, where nurses, doctors and medical equipment are constantly on the move--and retail, where the mobile users you're supporting may be your own employees, moving about a store--or they may be your customers, who by definition are not "internal" users.

All of this sets the stage for new sorts of partnerships and integrations, a good example of which was just announced by Aerohive, which took a couple of significant steps to enhance their offerings for retailers. The company today announced a partnership with AirWatch, the mobile device management (MDM) vendor, for the inward-facing portion of the mobility challenge: Making sure that BYOD users are placed under the control of network administrators with their personal (now doubling as their work) devices.

The second announcement is another partnership, this one with Euclid, a Silicon Valley startup that provides analytics to brick-and-mortar retailers that helps them understand what their shoppers are doing in their stores, while "anonymizing" the data to protect shoppers' privacy.

The AirWatch integration uses Aerohive's API to integrate the WLAN management system with AirWatch MDM, so that any device that attempts to register with the WLAN is quarantined and its information passed along to the AirWatch system for handling. Guests can be given specified access privileges, while an employee using his or her BYOD device for the first time on the network enters the policy-defined information required to register the device with the MDM system to place it under enterprise management. The process is shown in the diagram below: 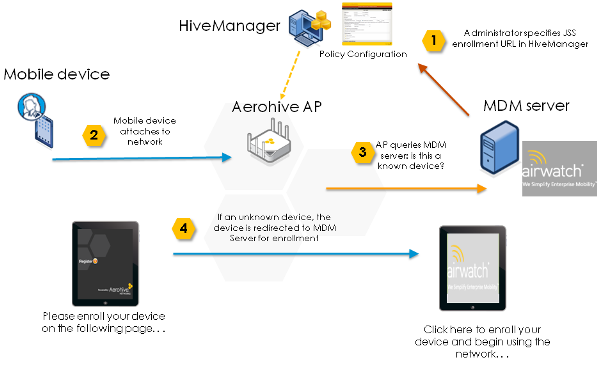 This integration has application for just about any enterprise, but Aerohive stresses that retail may find it particularly appealing, both because of the general prevalence of mobility requirements in retail stores, and also because of the emergence of mobile device-based point of sale (POS) applications.

The other announcement relates directly to retail. Euclid uses sensors and accompanying software analytics that let a retail operation track metrics including:

* How many mobile devices pass by a storefront; how many come inside; and the resulting ratio that yields a "capture rate."

* Customer loyalty, in the form of visit frequency and recency; and visit duration.

The new agreement allows Aerohive access points (APs) to be resold by Euclid to serve as the sensors for Euclid's analytics capture--either as a sensor that simply detects the mobile device MAC addresses that pass by and enter the store, or as a full Aerohive AP to allow for WLAN connectivity, with the sensor capability as well.

In addition to integrating the hardware for data capture, the partnership also includes Euclid's free analytics package as part of the Aerohive HiveManager management system, so that a store can be up and running with WLAN and customer analytics. There's a premium upgrade to the Euclid analytics software that comes with a charge.

One thing that Euclid stresses is that its system aggregates the traffic it collects and doesn't attempt to identify or associate users with MAC addresses--it only tracks the behavior of the MAC address at the device level, as broadcast by the device.

So these Aerohive announcements highlight a few trends that are likely to grow in importance: The need for enterprises to bring wireless devices into the communications system securely; the opportunity for integration with vertical-specific tools like Euclid; and the need to ensure security and policy enforcement as you do so.