Not enough attention is given to headsets -- thinking of them as an afterthought, rather as core to a UC deployment, is simply too easy. But as more enterprises embrace open office designs, the headset plays an increasingly vital role when it comes to communications and productivity.

We've talked about this before. Back in February, I wrote about how headsets can help employees working in open offices to better focus on job tasks at hand, while No Jitter publisher Eric Krapf discussed how needs shift with open office designs. We were writing based on some headsets Plantronics had just introduced and, as he noted, the company was "capitalizing on the challenges of the open office by offering devices that aim to ease the strain of all that aural distraction."

Well Plantronics is continuing to target this underserved facet of UC with a new headset designed specifically for communications and multimedia applications. The Voyager Focus UC headset, released today, is the company's first wireless stereo headset that includes active noise-cancellation technology. I spoke with Jennifer Adams, director of enterprise solutions marketing at Plantronics, ahead of the release to learn about all the headset's UC-related features.

The Connected Manager
In designing the Voyager Focus UC, Plantronics pulled from its research identifying five work personas: connected manager, desk worker, flex worker, office worker, and road warrior. From the research, Plantronics found that 69% of connected managers are challenged by ambient noise, and so developed the Voyager Focus UC to block out distracting noise and create an immersive audio experience for this type of worker, Adams said. The headset features active noise-cancelling technology, which Plantronics said is capable of reducing background noise by up to 50%, and hi-fi stereo sound for conference calls and multimedia consumption. 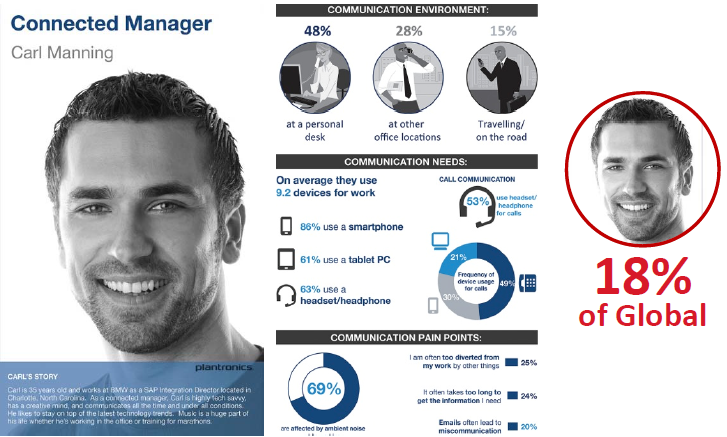 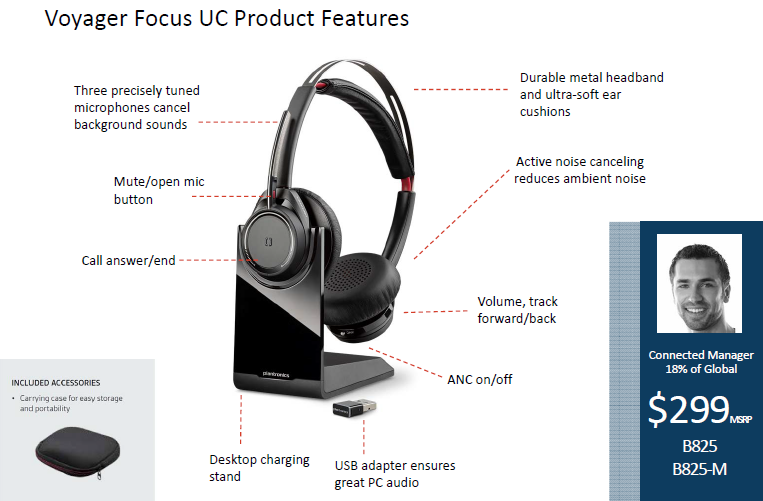 As Adams explained, one thing many IT buyers don't think about when purchasing headsets is that about half of workers prefer wearing the mic boom on the left side and the other half prefer it on the right side. With this headset, connected managers can wear the mic boom in either orientation; smart sensors in the headset will identify how it is being worn and automatically adjust R/L stereo output and volume control button locations accordingly for intuitive use.

The sensors are also able to tell when the headset is on a person's head or off, allowing users to answer calls just by putting the headset on or muting them by removing the headset. Users can control and customize headset settings through the Plantronics Hub client application.

Boosting Productivity
Hardly any new product is announced today without at least some discussion of improving productivity, and with this headset productivity is the name of the game. One particularly intriguing feature of the Voyager Focus UC became clear to me with an example. In order to reduce background noise, this headset is made of materials that create a solid seal around the ear. But how many times have you had to take your headset off in order to be able to hear someone who has just walked up to you to ask you a question? That's the thing about such noise-cancelling headsets: They are great for blocking out the noise, but they tend to shut users off from their surroundings as well.

To address this problem, the Voyager Focus UC features an open mic button that, when depressed, pipes sound into the headset. This means users don't need to remove their headsets to engage with those around them.

The headset connects wirelessly to either a PC or smartphone/tablet, and supports up to 12 hours of talk time and 15 hours of music streaming between charges. It uses Class 1 Bluetooth to support a wireless range of up to 300 feet that preserves battery life with adaptive power technology. The headset is slated for U.S. availability in mid July.