At Enterprise Connect earlier this month, I was privileged to moderate an end-user session, "Team Collab App Decision Factors: Enterprise Adopters Share Their Experiences," with four awesome panelists, representing different vendors and use cases for team collaboration. The panel included:

The panel represented not only different industries, but different approaches to technology. Welltok is a seven-year-old startup, while Brooks Brothers was founded in 1818 and claims to be the last surviving clothing manufacturer in the U.S. Interestingly, Brooks Brothers is perhaps the most "bleeding edge" customer when it comes to communications technology, as it's using the newest team collaboration technology introduced, AWS Chime.

There were various use cases, but it all came down to communication and collaboration -- being able to share documents, use persistent chat rooms, and bring in people from any location to share information. As team collaboration becomes more common within businesses, I expect we'll see more advanced use cases including document management, task management, and more.

Here are five key takeaways from the panel: 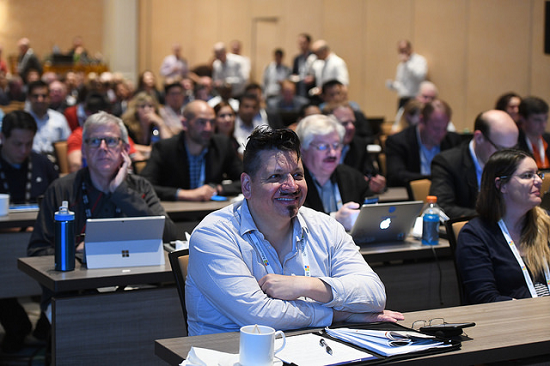 1. Find the right vendor and solution to best meet your specific needs.

This sounds obvious, but it's important to find what works for your specific users and use cases. With the exception of Brooks Brothers, all the panelists opted for the team collaboration application from the vendor they were using for their UC capabilities -- e.g., RingCentral, Cisco, and Microsoft -- making the vendor selection decision a bit easier.

"We put out an RFP to replace our audio and video conferencing solution and narrowed it down to handful of companies," Miller explained. "We wanted a solution that could escalate from chat to voice to video and integrate with other solutions. We then did a bake off and only one vendor's offering met the requirements and worked properly, and that was Chime." He added, "We initially offered Chime as a limited pilot to six people to make sure it worked well. Within a few days, 100 people were using it, with 600 users on it within a month. It spread organically throughout the organization."

Brooks Brothers also has licenses for another team collaboration service (I won't name names), Miller noted, but users find it "cumbersome, unwieldly; and it doesn't fit the way we collaborate." While there are more full-featured team collaboration applications available, AWS Chime best met Brooks Brothers' needs, for basic functionality including IM, file and screen sharing, and persistent chat, and was readily adopted by users for that reason.

2. Standardize on a single team collaboration application for your organization, rather than allowing workers to use the application of their choice.

All of the panelists agreed that it's best to designate a single tool that is supported by the company, rather than giving workers a choice of tools.

For example, Charter Communications basically told its workers that Cisco Spark is the tool that the company and workers are using, and IT removed all other team collaboration tools it had been supporting.

Welltok's Lesch realized that the company needed to move from five chat tools and four meeting solutions to one. "We shut down Slack and didn't make it optional. We told people that if you want to communicate and collaborate, you have to move to Glip," Lesch explained, adding, "We ripped the band-aid off when we made the changes and provided two weeks' notice to workers to switch to Glip."

Mott MacDonald's Chambers felt very strongly that "It's important to help end users realize how, when, [and] where they can use team collaboration." Charter's Bugbee added, "A lot of people want to know how I use Spark, and I show them how I use it every day and how it solves communication and collaboration gaps. It's easier to show people what I do with the tool rather than explain how they should use it."

Welltok's Lesch agreed, noting, "We would open a meeting using Glip, and let people join and ask questions. After they used the system, they saw the benefits and were more open to using it."

As expected, all of the panelists vehemently agreed on the importance of focusing on end user adoption. Most of the panelists found and identified early adopters who were the evangelists for team collaboration, helping it go viral within their organizations. Brooks Brothers' Miller stated, "We let people use it themselves and didn't force them to use it. Younger workers started using it, and then it spread -- it had a cool factor."

Mott MacDonald's Chambers recommended finding "friendlies who are receptive to bringing change to the world and can evangelize to colleagues." The company found that user adoption was organic, as these users recruited additional "champions" around the company.

Charter's Bugbee explained, "If you don't tell people why and how they need to use these new tools, change will come slowly. We've been going onsite and pushing it out and getting the word out there." Charter started with hands-on training and held training classes every week that employees could attend when it's convenient. Users were also encouraged to directly email him questions, which were responded to within 24 hours.

Welltok's Lesch spent a lot of time training end users and has an active Glip channel to allow for an open flow of questions and conversation. "We opened up lines of communication," Lesch said. "It's hard to get people to change so we did a lot of training and had open forums."

Lesch added, "Test and evaluate whatever tool you're using for as long as you can. We had a lot of people from different parts of the company involved in the testing, which helped with buy-in and adoption, as they felt they were part of the evaluation process."

When moderating sessions, I always ask the panelists to end with "Twitter words of wisdom," or final thoughts that can be encapsulated in 140 characters or less. Here's what the panelists advised:

Miller: Effective collaboration isn't about the tool, but a great tool sure makes it easier.

Lesch: Don't try to solve one or two problems -- Try to solve as many as possible with one solution.