And Cisco reasserted its dominance, re-taking a solid lead over the post-Nortel-acquisition version of Avaya.

Perhaps the only civil thing to be said for the 2009 PBX market in North America is it laid the stage bare for what then could be an improved 2010, or for some, as things turned out, a surprising and rewarding 2010 in terms of PBX line shipments.

2010 was to some degree a breath of fresh air. North America PBX line shipments grew 16 percent over 2009. Although PBX line sales for some manufacturers did fall off, two thirds got uplift in 2010. To put a better face on it, if we consider just those manufacturers who collectively accounted for 90 percent of the 2010 market, everyone saw PBX line sales increase. Among these top vendors, the most notable development was that, despite Avaya’s absorption of Nortel, Cisco moved solidly back into the market-share leadership position, moving decisively ahead of the expanded Avaya.

In North America, 2010 proprietary (as opposed to open-source) PBX sales were 13.6 million lines, 92 percent of which were generated in the US. These figures do not reflect sales of open source PBXs, itself a large market (see Eastern Management Open Source White Paper). 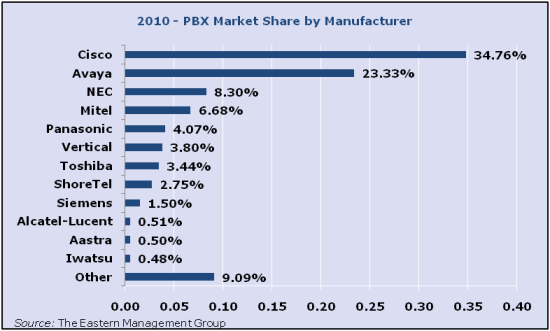 The 16 percent sales growth reflected new system lines sold as well as add-on lines sold to existing PBXs. Add-on PBX line sales increased 18 percent year over year, in effect pulling up those of new PBX systems. Frequently, though not always, add-on lines account for up to one-half of a manufacturer's PBX sales. In 2010 it was not that customers had less money to spend on new PBXs, though that frequently occurred, but rather IP PBXs, which account for half the PBX installed base, are easy to supplement with add-on lines and infrequently require system replacement.

2010 was a year to stand pat. Fewer companies relocated, and just 9 percent of North America PBXs sold were attributable to businesses moving locations or adding branches. Since customer satisfaction with in-place systems and manufacturers ran high in 2010, there was less incentive to displace anything.

A study performed by Eastern Management found the largest justification for new PBX purchases in 2010 was IT managers choosing to reel in operating expenses, and doing so by buying PBXs with functionality equipped to do just that.

SIP trunks were installed on 45 percent of new systems in 2010. One-third of these new SIP-trunk-enabled systems are now sending almost all of their traffic (90 percent of it) over the SIP trunk.

In addition, one third of new PBXs were 90 to 100 percent equipped with SIP phones. Skype, while not in use on three quarters of the new systems, is to a degree employed on the remainder. Softphones are used on 40 percent of the new PBXs.

PBX manufacturers did better selling to enterprises than small businesses in 2010; the latter group showed only modest PBX line purchase improvement over 2009 in North America. Panasonic, specializing in sales to small offices, had a better year than many competitors by keeping street prices low and leveraging the company's familiar brand. Toshiba similarly reported good sales to small offices and branches. The small business is an important audience since 40 percent of the entire North America PBX market falls below 50 lines. The 11-20 line segment is by far the largest sub group in the entire PBX industry.

Small and medium businesses have interests similar to those of enterprises when it comes to managing expenses. Historically, however, small systems with features for containing operating costs were not appropriately priced on a per line basis, while large enterprise systems were. Today this is a largely untapped market with significant potential. It is also a void that open source PBXs are seizing on. 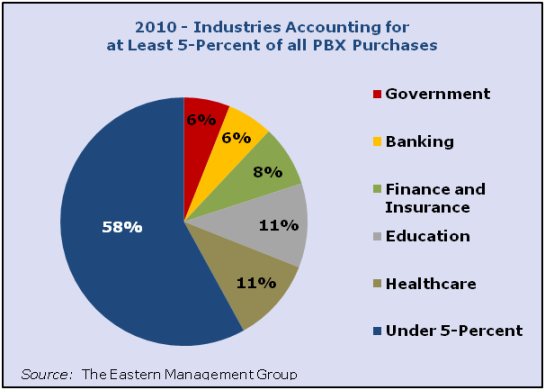 Street prices continue to fall
All manufacturers were amply challenged attempting to grow PBX line sales in 2010. The cost burden on all vendors was heavy. Based on our research, 2010 street prices dropped an average 1-1/2 percent on PBX systems, though less erosion occurred on list prices. Street price per line averaged $529. That alone was insufficient bait and was sweetened by manufacturer promotions larger than we have observed in recent years. PBX manufacturers ran on average 11 promotions at all times during 2010, with incentives changing each 30 to 90 days. Companies such as Avaya often ran as many as 30 concurrent marketing programs for end users and dealers, in Avaya's case with great success. 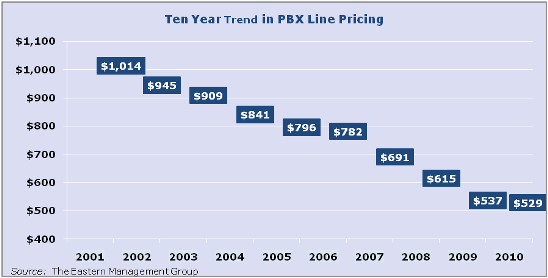 Some PBX manufacturers offered their own customer financing or arranged third party loans to win customer sales, and in doing so capitalized on scant bank lending available to many needy PBX purchasers. Avaya and NEC increased shipments by 23 percent and 8 percent respectively, in part by offering 60 month terms and 0 percent financing. Mitel had promotions deferring customer payments for 60 days, followed by one-half off the customer's first 12 months' payments for a managed PBX. For Mitel this contributed to the company's 7 percent year over year increase in PBX line sales. It's likely that financing erected barriers that competitors were frequently unable to defeat, and for some PBX manufacturers, this factor played a larger role in 2010 PBX line sales than front and back-end rebates, co-op dollars, competitive displacement programs, market development funds (MDF) and other marketing incentives.

Cisco dominated the 2010 North America market by increasing line shipments 37 percent over 2009 and selling 4.7 million PBX lines. That equated to 35 percent of the total North America PBX market and a third more than Cisco's next closest rival, Avaya.

Avaya was a wild card entering 2010, challenged by the mechanics of assimilating newly acquired Nortel operations, but Avaya outperformed in the year and exceeded our expectations. Operating under a wave of competitive displacement programs from several manufacturers, dealer recruitment strategies of practically everyone, and force-feeding distributors to become value added distributors, Avaya emerged from 2010 in enviable shape. The proof was that Avaya's 2010 North America sales exceeded by 5 percent the combined performance of Avaya plus Nortel in 2009.

We believe several factors contributed to NEC's noteworthy performance in 2010, resulting in what may have been the company's best overall sales performance in a half dozen years. NEC's 2009 structural reorganization transitioned the business away from silos and repositioned it for solution sales, generally resulting in larger, better integrated and more profitable sales. Four verticals--government, health care, higher education and hospitality--have become large target markets for NEC. Rather than discrete markets, NEC treats the four industries as interlocked, frequently with a common customer base. NEC's channel partners in 2010 used NEC professional services, a new line-of-business, to support partners' installs. We believe NEC had 40 percent of its North America sales on systems larger than 250 lines.

Panasonic was a dominant force in the North America small PBX market, handily leveraging the company's favorable brand recognition on electronic products. We assess that Panasonic generated 40 percent of its North America PBX line sales from offices under 20 PBX lines and 75 percent of its sales from others up to 50 PBX lines. Panasonic's street prices were among the lowest of any large manufacturer.

Other manufacturers focused almost exclusively on the small and medium business market are Vertical Communications, which in 2010 sold IP systems for under $200 per line, and Toshiba with strong sales in the retail market. Iwatsu, a capable international manufacturer, had modest distribution in North America.

Can 2011 Beat 2010?
We expect the 2011 and 2012 North America PBX market to show continued strength. In a recent Eastern Management survey of 1,000 IT managers, we found that 35 percent planned a PBX upgrade cycle commencing by mid 2011; an additional 28 percent called it a possibility. This points to an uptick in purchases, suggesting the North America PBX market may be in the early stage of resurgence, raising sales expectations for the foreseeable future.

How Eastern Management Analyzes the PBX Market
Eastern Management's 2010 PBX market analysis is based on 8,000 interviews with IT managers in more than 150 countries. Data gathering and fact checking is supplemented with the cooperation of PBX manufacturers and distributors. Eastern Management proprietary models and Monitor platform are used to identify 40,000 line items of PBX sales data by business size, industry and geography.